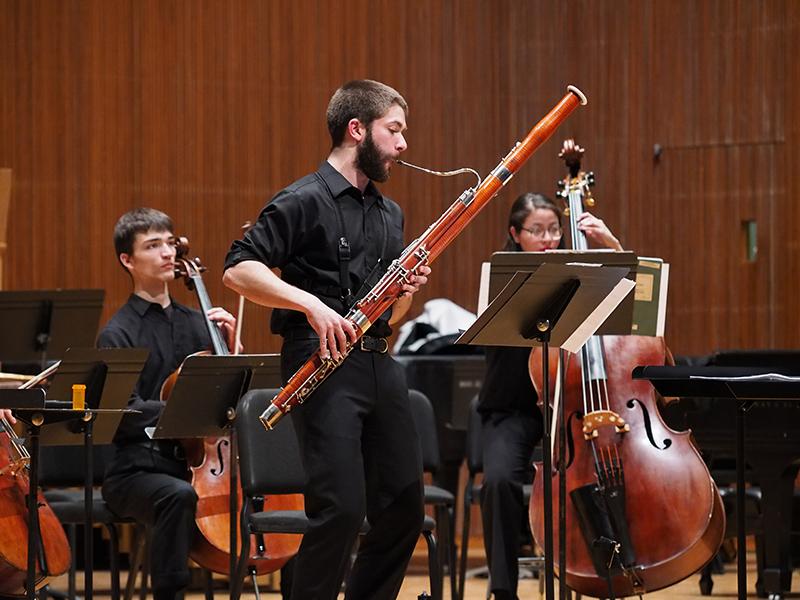 Conservatory senior Ben Roidl-Ward performs as part of the Contemporary Music Ensemble. Roidl-Ward took center stage as a featured soloist in Sofia Gubaidulina’s Concerto for Bassoon and Low Strings at a concert in Warner Concert Hall this past Friday.

Shouts of “bravo” rang through Warner Concert Hall this past Friday as Conservatory senior and bassoonist Ben Roidl-Ward played the final punctuating notes of Sofia Gubaidulina’s Concerto for Bassoon and Low Strings. The concerto was programmed alongside the remarkably beautiful Snow Requiem by Aaron Helgeson, OC ’05, and Jonathan Harvey’s Wheel of Emptiness. Tim Weiss and the Contemporary Music Ensemble gave one of the most inspiring and stunning concerts of the year.

The bassoon is a not a typical choice for a soloist — especially when the orchestra accompaniment is all cellos and basses. The Gubaidulina concerto, however, defied expectations and established a unique atmosphere. Roidl-Ward, the featured soloist on the piece, demonstrated not only flawless technique but also impressive control of sound and color. He navigated treacherous high runs and multiphonics with confidence, never faltering.

As the performers took the stage, it was difficult to imagine how the low timbre of four basses, four cellos and a single bassoon would blend, but any unease was completely lifted with the first note Roidl-Ward played. The piece began at the highest range of the bassoon; the sound floated ever so gently atop the lower, slow-moving strings. Each of the five movements built on the previous one, adding new colors and textures. The piece required an abundance of extended techniques both in the bassoon and the strings, but the players met the challenge of such difficult contemporary techniques head-on and performed the piece in absolute synchronization. The final notes played on the bassoon offered a clear and commanding finish to the wonderfully constructed piece, and the crowd went into an unadulterated frenzy.

Following Roidl-Ward’s inspiring performance was the world premiere of Helgeson’s Snow Requiem, which featured soprano Alice Teyssier, OC ’06, and Professor of Violin David Bowlin, OC ’00. Typically, CME concerts are dominated by works for small chamber ensembles, but Snow Requiem called for an almost full-sized orchestra, a four-part choir and the two soloists. The piece began with a lengthy introduction in which Teyssier sang a chant-like melody that undulated with each passing phrase. The orchestra joined in, providing a textural bass which Teyssier floated above with rich tone. The piece consisted of six movements played continuously, each developing an original, almost aleatoric melody in the soprano. It was difficult to distinguish between the movements, but, at some point, Teyssier finished her melody and slowly walked offstage as Bowlin came onto the stage for his portion of the solo line. Much like the voice part, the violin wandered up and down, building on the orchestra’s momentum. The solo parts were not about sheer virtuosity. Rather, they focused on creating thick textures and adding color to the more placid role that the orchestra played. The piece flowed seamlessly between moods and, although it was nearly 35 minutes long, not a single moment of the piece lacked energy or the audience’s attention.

The final piece of the concert was in more traditional CME style. Jonathan Harvey’s Wheel of Emptiness called for a smaller chamber group of various winds, strings, percussion and electronics. The piece was fiercely rhythmic with constantly driving passages, as various voices exchanged leaping melodic motifs. Under Tim Weiss’ direction, the ensemble performed perfectly in sync and with superb balance. The bass voices supported the higher voices beautifully.

As a whole, the CME’s performance highlighted the intriguing world of modern composition. It took the ensemble out of its comfort zone, but also included more typical pieces.