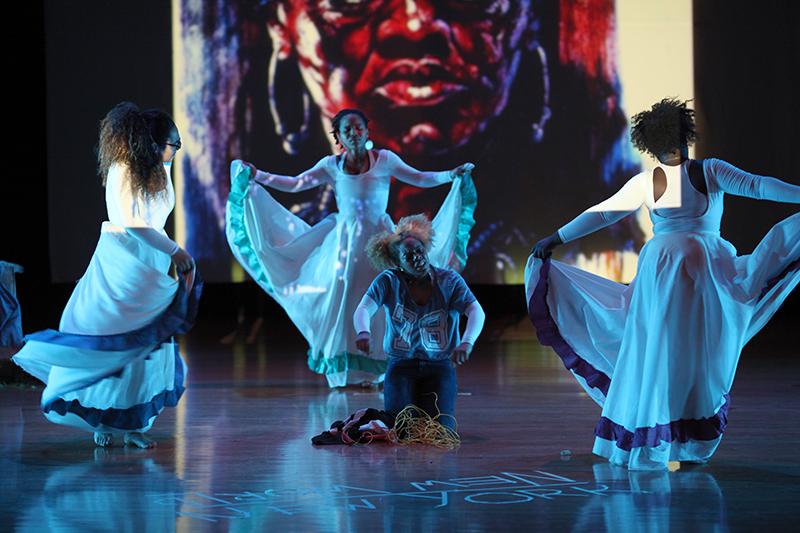 College senior and Africana Studies major Kara Mahon’s honors dance show, “Crossing Rivers: The Love of Afrekete,” gleaned inspiration from African-derived ritual practices and spiritual worship to represent her healing following sexual abuse. The event, which took place in Warner Main Space last Friday and Saturday, got its title from a saying that her mother and other family members from the South have about “conquering personal demon[s],” according to Mahon. As such, the idea of cleansing oneself through overcoming a traumatic experience influenced the thematic lighting and costumes, as well as the story, which the dancers conveyed physically without uttering a single word other than “mama.”

Mahon has found strength in the dance community at Oberlin ever since she joined Dance Diaspora as a sophomore. Mahon said she began dancing as “the backup” dancer in the group and attributes her growth to the energy of her fellow dancers. Mahon said she believes that “dance can move anywhere” and that it can help people around the world tell their stories in a resonant way. Now a senior, Mahon plans to study macro-social work in graduate school.

College junior and “Crossing Rivers” dancer Sophie Umazi Mvurya explained that she saw Mahon’s healing process in all facets of the show. “The show, and Kara’s story, … is something that touches on many female lives, especially women of color,” she said. Mahon explained that working with her hands to create the entire set for the show from scratch was as important as dancing in the process. Mahon said she “discovered a new passion and source of healing” in doing so.

“Crossing Rivers” held personal significance to Mahon and her family, as well as political significance to the institution of dance at Oberlin. According to Mvurya, “the Dance department is still lacking in recognizing dance forms from other continents.” The absence of dance diversity leaves many students seeking spaces in which they can express themselves through dance outside of institutionally promoted forms or styles.

Mahon said she crafted the show with both the Oberlin community and family in mind and used dance as the medium through which to share the story of her sexual abuse. “The whole reason I did [the show] in the first place was to let my family know that this had happened to me, because they didn’t know.”