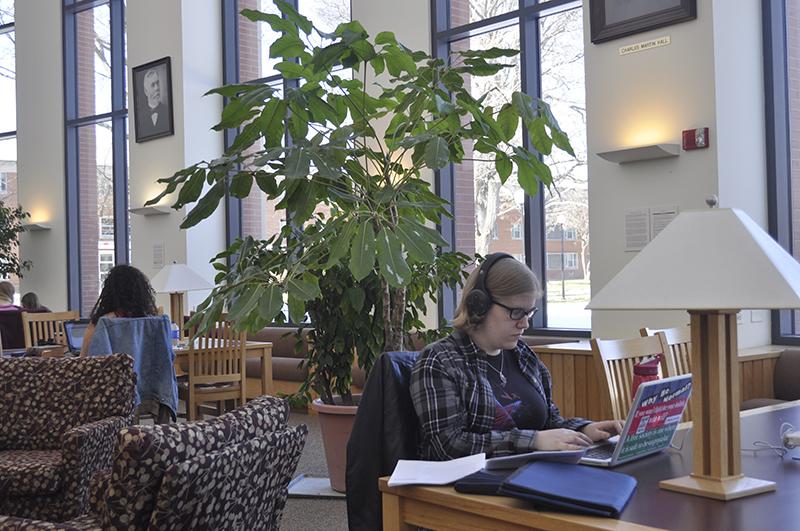 College senior Miranda Rutherford studies in the Science Library. Last semester, Tim Elgren, the dean of the College of Arts and Sciences, asked science faculty if a section of the Science Library could be better used as classroom space.

Discussions about the future of the Oberlin College library system are in full swing as the Strategic Planning Steering Committee makes long-term decisions for the institution as a whole. According to members of the Library Committee, the administration may also be considering possible changes to the library system’s budgeting process, although it’s unclear what those changes would actually entail.

“The faculty Library Committee has heard of a change in budgeting approaches on the administrative level,” said Ann Sherif, professor of Japanese and chair of the Library Committee. “What that actually means in terms of the library budget — we understand that conversations within the administration about any kind of new approaches to allocations and decision-making about the budget is undergoing discussion. Furthermore, in the trustees’ meeting this weekend, there will be additional discussion. We’re anticipating further updates on that.”

In light of recent administrative discussions, Sherif stated that the Library Committee has emphasized to the administration how important it feels the libraries are to Oberlin College.

“As stewards of the institution, the faculty Library Committee wants to ensure that this is a resource that the institution properly protects, and [one that] ensures the growth, health and sustainability of the libraries,” Sherif said.

According to Tim Elgren, dean of the College of Arts and Sciences, no substantial changes to how the libraries operate are currently planned. However, he also indicated that the libraries are not exempt from the Steering Committee’s purview and that the Committee could recommend major changes if it so chose.

“If we’re going to do [strategic planning] in an honest way, there’s no sacred ground,” Elgren said. “Everything has to be on the table, and in that sense, absolutely, the libraries are on the table. … But it’s not being singled out or focused on. Everything’s on the table.”

Elgren also said that he hoped that the space could be made more “interactive” by moving books that are rarely checked out to off-site storage, although he also noted the lack of additional storage space currently available.

To Elgren, the rise of information technology will alter — and already has altered — the role of libraries in a fundamental way.

“The newest frontier here is technology,” Elgren said. When speaking to “a new vision for the libraries,” he said their new role could be “to use the front face of the library as a technology hub, to allow people and the librarians to be information-resource people for our community.”

Alison Ricker, science librarian, said in an email to the Review that she believes the Science Library is already a popular workspace for students.

“The library gathers ‘typical week’ statistics that are contributed to a national effort that gathers statistics on academic library use,” Ricker said. “Recording the gate count (people count) at each campus library’s entrance is part of that project. Our typical week count for the last eight semesters, including spring 2015, has varied from 3978 to 5956 (this semester was 5599), which has been consistently higher than the Art or Conservatory Libraries for the same period, but not surprisingly significantly lower than traffic into Mudd.”

Another sign that the library system is entering a new era is the fact that longtime Director of Libraries Ray English will retire at the end of this year. According to Elgren, the College is going to hire a headhunter to find potential candidates, a practice the College regularly uses to fill top-level positions. Alan Boyd, the current associate director of libraries, will serve as the interim director.

Two library-related speakers will visit Oberlin in the next few weeks. Michael Roy, the dean of the library at Middlebury College, will speak on March 20; James Michalko, vice president of the OCLC Research Library Partnership, has been invited by the Library Committee, the College Libraries, and the Office of the Deans of Arts and Sciences and the Conservatory to give a talk on April 22.