Mudd Library’s Special Collections and Letterpress Thrive Thanks to Vermue 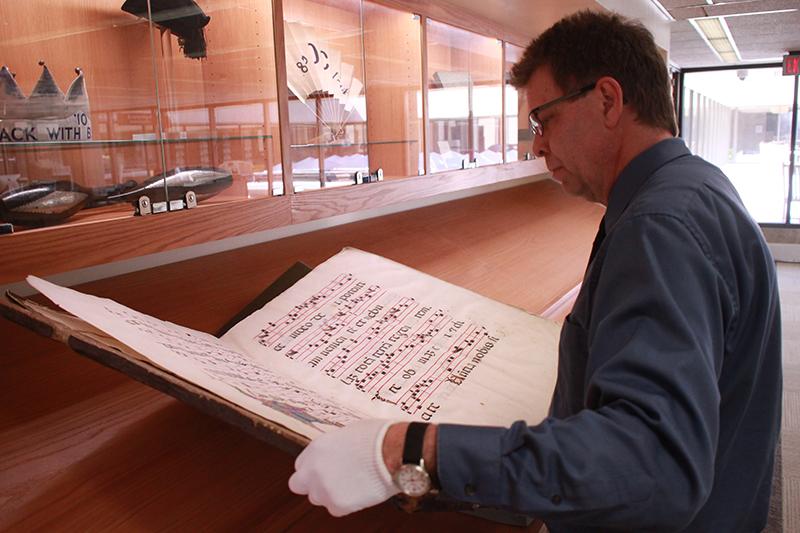 Ed Vermue and I failed to acknowledge one another as we impatiently brushed past in the hallway before whirling in a simultaneous double-take, recognition arriving just a second too late. I had caught him miderrand, and rather than pop back into his office (for reasons I discovered later), we settled into a pair of comfortably cushioned chairs in the hallway just outside of the Special Collections on the fourth floor of Mudd library.

Between a row of blue lockers and the wall of windows that separate the hall from the sun deck on the roof of the building, Vermue reclined against the back of his seat as he began to explain exactly what the positions of Preservation Librarian and Special Collections Librarian entail.

“There’s hardly a typical day,” he said. As we spoke, he fiddled with a pair of reading glasses in his hands, squinting against the glare of sun through the windows and speaking with slow, clear cadence, almost as if giving a lecture.

Even though his daily routine may be rather irregular, Vermue’s work, like that of a college professor’s, can be divided into two time periods: when academic classes are in session — the fall and spring semesters, along with Winter Term — and breaks. “I wear two hats,” Vermue said.

During the latter intervals, Vermue works primarily with a small group of students to ensure the survival of the books in Oberlin’s circulating collection. Together, they work to repair and prevent damage to the aging books on the lower floors of the library so that future generations can continue to benefit from the large collection.

Most of his interaction with students, however, comes through his work with the College’s Special Collections, which feature a constantly developing assortment of historical artifacts relating to the evolution of printed media. “It’s not just a rare book collection, but a special collection on any subject,” Vermue said. The fourth floor of Mudd houses everything from a facsimile of a beautifully illuminated Book of hours to original copies of Uncle Tom’s Cabin and other anti-slavery literature to 20th century Star Trek fanfiction — and that barely scratches the surface. Each manuscript tells its own story, and Vermue acts as a liaison between each artifact and the teachers and students who peruse them during their sessions with him.

In addition to working with the manuscripts directly, Vermue has approached the Special Collections with a more “handson” attitude. In an effort to help students understand exactly how some of the materials in the collection were made, Vermue has developed a working knowledge of the skills necessary to replicate some of the historical processes involved in print culture. He regularly runs workshops at the Letterpress Studio on the second floor of Mudd, helping students learn to navigate historic printing methods amid row upon row of typeface and ink rollers.

Vermue received an Honours Bachelor of Arts degree in Philosophy from the Wilfrid Laurier University in Ontario. He remained there to attain a Master of Arts in religion and culture before completing a second Master’s degree in Library and Information Science at the University of Western Ontario. Vermue joined Oberlin’s staff in July of 2000 and continues to attend a variety of seminars and workshops relating to different aspects of the history of the book.

When I asked where he had picked up these skills, he smiled and said that he traveled throughout the year to different conferences that spotlighted book arts. “I sure didn’t learn it in library school,” he said, explaining that most of his education had been focused on using the digital information systems that libraries generally employ. Now, Vermue uses that training to renegotiate the relationship between the library’s physical collection and digital text. He helps students understand how book culture developed and that many of the most meaningful clues to the historical, economic and social context of a given text are firmly wrapped up in the physical attributes of the manuscripts in the collection.

“I don’t see my function as being a warehouse – I see Special Collections as having a laboratory purpose,” he said excitedly. Under his care, Special Collections has increasingly focused on the book arts, from the days when everything was made by hand. This focus on the interpretation of physical artifacts makes his job more like that of a museum curator than of a librarian. Vermue looks for reader marks, binding flaws, patterns of wear or even indications of censorship to tell the story of the vast range of books under his care.

I asked if there were any particularly popular areas in the collection; there aren’t. Or rather, according to Vermue, there are, but interest in the various niches on the fourth floor of Mudd tends to shift with students’ curricula. At the moment, the medieval manuscripts are drawing a large amount of interest, but so is the collection of documents and artifacts from the 20th century. “Telegrams aren’t as sexy to look at as a medieval manuscript,” he quipped, explaining that the growing interest in these more recent artifacts is linked to their casual nature. Vermue’s face brightened as he began to talk about the Special Collection’s small but growing collection of artifacts of visual culture like primitive moving image devices, which the college’s Art History, Cinema Studies and Comparative Literature departments have all developed a particular interest in recently.

The librarian works directly with professors to continue to build and develop the collection. Collection-building occasionally involves purchasing additional manuscripts or accepting donations, but according to Vermue, the majority of his time is spent searching through existing sections of the collection and reinterpreting their potential applications. “Collection-building is a little bit of a sleight of hand,” he said, going on to explain how the same material could be relevant to a range of different courses. As interest in extra-textual objects — like the letterpress — increases, Vermue mentioned his interest in acquiring a selection of quills and exploring the history of calligraphy and paleography in more depth for his next venture.

The fourth floor of Mudd offers only limited space, and as Vermue continues to study the archives he said that he regularly finds texts that don’t belong in

Special Collections; often they shouldn’t have been there in the first place. When this happens, he simply relocates the material to the main floors and the object enters circulation with the rest of the library’s books. Rather than a comprehensive assortment of any particular literary epoch or genre, Vermue said that he is satisfied to collect only a sample — enough to teach with — of each kind of work. After we had finished talking, I stopped by the librarian’s office to check scheduling for the rest of the week; literally every surface was covered with one sort of text or another, all clamoring for attention.

A couple of days after our conversation, I watched him work with a class on 18th-century British print culture taught by Professor Laura Baudot. While the students may have been bleary-eyed and possibly coffeedeprived at 9:30 a.m., Vermue moved energetically around the table in the classroom of the Special Collections department, preparing each of the books that the students would be working with.

After Professor Baudot explained that the lab would be focused on the para-textual aspects of the selection of volumes, Vermue laid down the ground rules of working with older volumes. He talked about the texts as if they were human beings. “Don’t force them to do something that they don’t want to do,” he said. “You wouldn’t force a human leg above the head if it didn’t want to go there.” As the class progressed, Vermue surveyed the students like a hawk, a stern, almost fatherly expression on his face as he let them handle the books, with the occasional “be careful” directed at some of the more enthusiastic students.

After dividing into pairs, the class carefully studied each of the prepared volumes, with Vermue anxiously roaming around to answer questions and point out details more obvious to his trained eye. Here was the curator in action. Vermue provided an encyclopedic level of context on everything from the watermark on the paper to the economic status of the print shop that had produced the work. He has a dry, somewhat officious tone, but I felt like I’d miss something important if my attention lapsed even for a moment. He had mentioned to me that Master’s programs in the history of the book were becoming increasingly popular; I think he was happy that other institutions were developing such an interest in his field. As Vermue worked with the texts, his style of speech became less congenial, more lecture-like; he seemed more professor than librarian.

Baudot chimed in from time to time to point out the relationship of the physical context to specific narrative attributes from the class, but she generally deferred to Vermue on any matters relating to para-textual elements. “You can always look this stuff up on the computer in the other room,” she said. And then, with a smile — “Or, you know, you can just ask Ed.”