In the Locker Room with Nick Lobley and Matt Fox 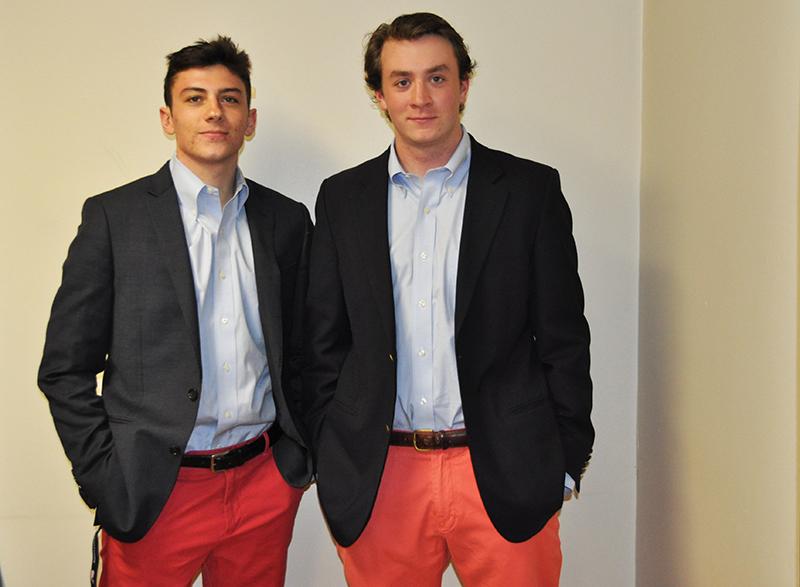 This week, the Review sat down with men’s lacrosse power duo, college juniors Nick Lobley and Matt Fox, to discuss their individual successes, the challenges of practicing indoors and their goals for the remainder of the season.

You both lead the points, goals and assists categories. What do you attribute your individual success to?

Matt Fox: Just growing up in a hotbed of lacrosse. I’ve been playing since I was six or seven years old, so I feel like we can see the field better than most others.

Nick Lobley: We definitely play off each other. He probably has more assists, and I have more goals because he feeds me. But it’s more of a team thing. Lacrosse is just such a team sport, and you need the whole team to be playing well to put up numbers. I need everyone else doing other stuff so I can play well.

Moving into a flurry of conference games in the upcoming weeks, which teams are you expecting to be the toughest competition? Do you have any rivals?

MF: We play Denison [University] on Saturday, and they’re nationally ranked. They’re a premiere DIII program; they’re top 20 every year. So that’s going to be a really tough contest. And then we play Kenyon [College] next Wednesday, so if we beat either of those teams we can set our path toward the playoffs. We play a couple of younger teams to finish off the year, so if we beat Denison or Kenyon we’re really in the driver’s seat to make the playoffs.

NL: Kenyon is a big rival. We haven’t beaten them in 19 years, and our coach hates Kenyon so he kind of hypes it up. We’ve lost in a heartbreaking fashion to them for the last few years. I think it’s probably the most similar school in our conference.

What have been the biggest changes you’ve seen in the program from your first year up until now?

NL: When we were freshmen, we were really young, and a lot of the better players on the team were young. I think that our team has been like that for the past three or four years ever since we got our new coach. We get these good recruiting classes, and they’re better than the year before, and keep getting better and better. But now, I think we’re at a point where some of our better players are the older guys. We had that last year a little bit too, but especially from freshman year to now.

How much does the weather influence your ability to come out strong at the beginning of each year?

MF: Spending time in Williams [Fieldhouse] is terrible. It’s not even a third of the field that we play on. So we can’t spread out our offense or get a feel for the field. Our defense gets so used to playing in tight little zones, so if they get spread out it’s a completely different game outside.

NL: That’s one thing that the turf helps with because it gets us out earlier than the grass. That definitely helped out a lot. We got out two weeks earlier than last year.

What have been the most exciting and the toughest parts of this year?

MF: The toughest part was losing to Capital [University] and Baldwin Wallace [University]. They’re two teams that we kind of crushed last year and were better than. And we still are better than them.

NL: The most exciting [part] was beating The College of Wooster last Saturday. That got our season back on track. With some of these worse teams it’s harder to get up, but you get more excited for home games against conference rivals. At the same time, that’s why you can’t sleep on some of these other teams.

How big of a role do you think the first-year class has played on and off the field this season?

NL: We definitely got a good freshman class. But like I said before, some of the older guys are still in their positions. We got a really good midfielder, Reese [Koburov], he was a first-day starter. He’s very athletic and has a very good shot. There’s definitely three or four freshmen that get good time.

MF: It’s nice that we have the older guys to help the freshmen develop their skills.

How did you use spring break to prepare for upcoming games?

MF: We went to Annapolis, MD, and played an east coast Maryland team. It was nice to get away because our freshman year we stayed here and that kind of stinks. So it was nice to have a good break, and Annapolis is a great little town. It was fun to be with the team and travel. We practiced on Sunday, Monday and Tuesday, and then we left on Wednesday morning.

NL: It was a good bonding experience for the team to all stay in the same place. You only focus on lacrosse without having to worry about work and stuff like that. You get to just relax and play.

What are your goals for the rest of the season? Next year?

MF: We really want to make the conference tournament: so beat Kenyon, beat Denison. Our first year was the first year our conference had playoffs.

NL: DePauw and Hiram are first-year programs that have never even had teams. So ever since there’s been eight teams in our conference, they’ve started playoffs. There’s only been two years of playoffs. It used to just be off of record, which isn’t that fun.