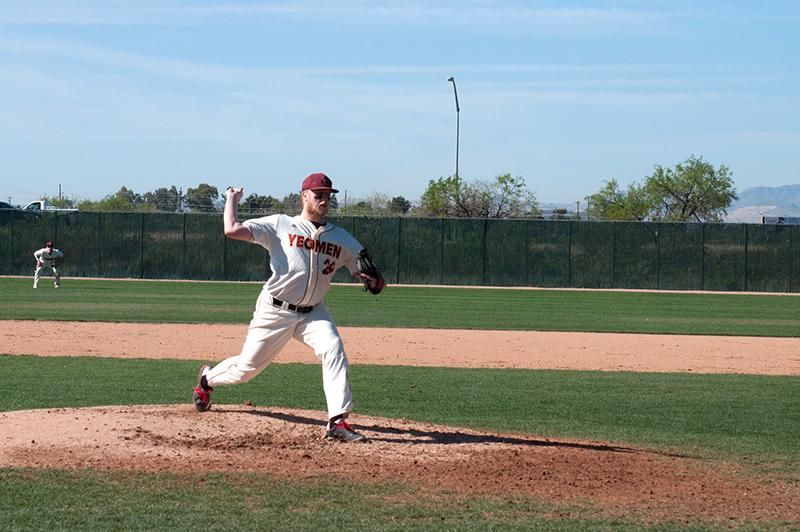 Senior pitcher Benjamin Whitener winds up for a pitch in a game against Williams College last Monday, March 23 at the Tucson Invitational in Tucson, AZ. The Yeomen defeated Williams 11–3 and went 6–8 over spring break.

The baseball team returns to Oberlin after a 14-game stretch at the Tucson Invitational over its spring break trip to Tucson, AZ. The Yeomen faced competition from all over the country at the weeklong event, finishing with a 6–8 record to push their overall record to 9–12.

The Yeomen started the week off with back-to-back doubleheaders against Hamline University and Gustavus Adolphus College, both Minnesota-based schools that also made the trip out west for the competition. Oberlin split the first doubleheader to Hamline, dropping a close 8–7 affair in the first game before bouncing back with a convincing 11–5 victory in the second contest. The Yeomen used this energy to propel themselves over Gustavus Adolphus in their first game 6–2, but couldn’t muster the momentum to close out the second game in a 19–10 loss.

Head Coach Adrian Abrahamowicz said that playing 14 games over the seven-day stretch definitely pushes the team to exhaustion, but that the objective of the trip was to assess the team’s talent and prepare for the upcoming conference games.

“I always say if you can play 14 games in seven days, playing four games in two days should be really easy on the weekend,” Abrahamowicz said. “So we use it to evaluate talent and to give younger guys an opportunity to get on the field too. We went down there with 43 guys dressed, and everyone played.”

First-year Milo Sklar was one of the 10 first-year baseball players who used the Tucson Invitational to showcase their abilities. Abrahamowicz said that Sklar was one of the key contributors of his class as a relief pitcher; he also named first-years Sean Kiley, Liam Flaherty and Nicholas Morgan as potentially strong assets for the team. However, with a senior-heavy squad occupying seven of nine starting spots, the first-years might see less playing time heading into upcoming North Coast Athletic Conference games.

After Oberlin’s game against Gustavus Adolphus, the team played Williams College and Middlebury College in back-to-back games on Monday, March 23. Seniors Kyle Decker, Jeff Schweighoffer, Andrew Hutson, Benjamin Whitener and Danny Baldocchi laced consecutive singles to score two runs early in the first inning against Williams. The Yeomen added three more runs in the first inning, which Hutson said was an intense start to the game, with trash-talk being exchanged between Williams’ pitchers and Oberlin’s hitters. However, he said that the tension created a more competitive and fun environment.

“It got heated, needless to say,” Hutson said. “The dugouts cleared out for a minute, but I think it helped fire up the team and helped catapult us into beating them.”

The Yeomen pulled out a much closer 14–13 win against Middlebury. The team fell behind early in the game, trailing 12–4 in the fifth inning, but was able to claw its way back in the game to ultimately score 10 runs in the final six innings en route to a walkoff win. After Hutson tied the game with a sac fly in the eighth inning, junior catcher Brian Hemmert added the final blow on a bases-loaded single to score classmate Josh Newborn for the game-winning run. Baldocchi attributed the come-from-behind win to bench players producing in key spots.

“For whatever reason, Middlebury always gives us a close game, even though we know we are infinitely better than them,” he said. “But Mike Massala got the game-tying hit, which is huge from a sophomore who has gotten maybe 15 career at bats to come in with the game on the line and get a huge hit that let us win the game.”

Oberlin continued its up-and-down play throughout the rest of the week, losing in both games on Tuesday, March 24 against Carthage and Carleton Colleges but besting them in rematches the following day. With most of the week behind them, the Yeomen’s momentum waned heading into their last doubleheaders against Lewis and Clark College and Grace University. Oberlin lost to Lewis and Clark 7–5 in its first game and suffered a more decisive 12–6 loss in the second contest. The Yeomen continued that streak in their doubleheader with Grace University, losing 11–3, 9–5. Schweighoffer said that the team was exhausted and out of pitchers after playing in so many games, which contributed to the losses late in the week.

Moving forward, the Yeomen will kick off their first weekend of conference doubleheaders against Hiram College this Friday at 3 p.m. in Hiram, Ohio. Schweighoffer said that the Yeomen will have to be wary of not playing down to Hiram’s level.

“Hiram is definitely not bad,” he said. “We need to play a hard-hitting game and take them like a top team, or they can sneak up on you sometimes and win a couple of games.”