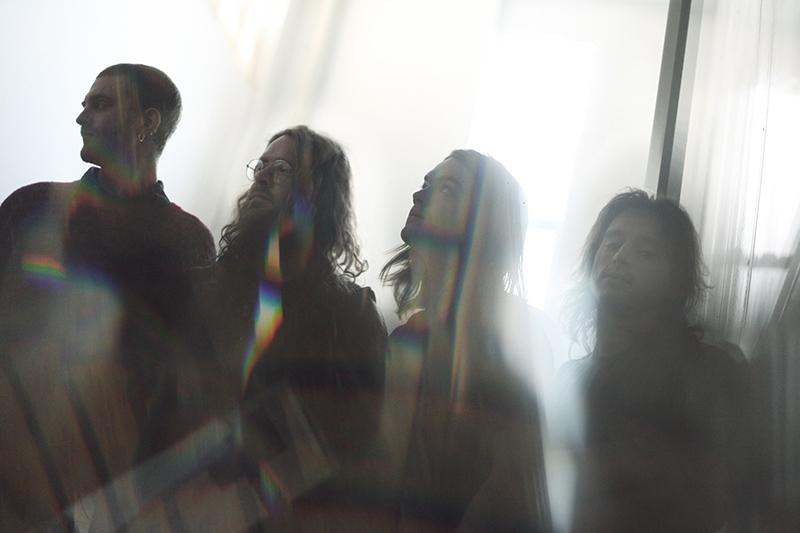 Liturgy stares contemplatively into the distance. Fresh off the release of their electronic-tinged third album, The Ark Work, the Brooklyn-based black metal outfit will play at the ’Sco this Saturday at 10 p.m. Support will come from Sannhet and Horse Lords.

“Some people think the record is a joke,” Liturgy frontman Hunter Hunt-Hendrix said of his band’s just-released third album, The Ark Work, in an email to the Review. “Others describe it using phrases like ‘mad genius,’ ‘masterpiece,’ ‘ahead of its time’ and so on. This is certainly the type of record that is aiming for that type of status, for better or for worse.” Liturgy will likely perform cuts from the album at the ’Sco this Saturday at 10 p.m, giving attendees a chance to decide for themselves what camp they fall into.

The Brooklyn-based band will play Oberlin’s third annual Metal Night alongside Sannhet, a like-minded Brooklyn atmospheric metal outfit, and Horse Lords, an experimental rock band from Baltimore, MD. Liturgy may be headlining Metal Night, but the group has pushed its sound far beyond the confines of heavy metal with The Ark Work. Due to the genre-bending style featured on the LP, Hunt-Hendrix and his bandmates are sure to draw a crowd interested in music both metallic and otherwise.

Liturgy’s new record may have received sharply contrasting reactions, but Liturgy is no stranger to this sort of response. The band originally attracted attention — both negative and positive — after the release of Renihilation, its first record, in 2009. Critics reviewed Renihilation favorably, but the same cannot be said of Hunt-Hendrix’s “Transcendental Black Metal Manifesto,” a piece of academic writing, published in 2009, on Liturgy’s sound and its relation to the black metal genre. The manifesto became a point of constant derision for critics and metalheads alike. Lampooned as a purposely dense example of pretension in the metal scene, the manifesto became more widely known than Liturgy’s music itself in certain circles.

“The writing in the manifesto is presented in an incredibly inaccessible way, effectively alienating anyone who’s not intimate with both black metal and academic writing,” College senior Mark Moritz-Rabson said. Moritz-Rabson, who runs WOBC’s metal workgroup and plays in the technical death metal band Existential Animals, agreed that much of Liturgy’s current prominence can be attributed to its controversial nature. “Liturgy is undoubtedly more renowned for its reputation than for its music. … I’ve probably spent more time reading about than listening to Liturgy,” he said.

Listeners and critics have expressed frustration with Liturgy’s role as a band whose fame is based in controversy rather than music. College first-year Andrés González, who enjoys listening to and composing in metal-related genres like hardcore punk, blamed this reality on heavy metal culture rather than on Liturgy itself. “Metal as an institution [dislikes] the idea of progress,” González said. He and Moritz-Rabson both touched on the idea that ignoring the media’s sometimes vitriolic coverage of Liturgy helped them appreciate the band’s music. “Whatever your thoughts about the band’s ideology, you can’t deny that they push boundaries on multiple fronts,” Moritz-Rabson said.

Hunt-Hendrix said that he has become less interested in many of the lofty ideas that originally made his band so controversial. “In 2009, it was really exhilarating to discover that there were people who were both interested in contemporary speculative thought and black metal, just like I was,” he said, speaking to the mindset that led him to debut his contentious manifesto at Hideous Gnosis, a 2009 academic conference. “But since that time … I [have come to] see the band as something more or less separate from a lot of my ideas — as an actual group of four people playing music together,” he said.

The Ark Work has done anything but move Liturgy out of the limelight. However, this time around, critics and fans have centered their discussion on the album’s musical content, which has been as divisive as the ideology associated with Liturgy’s previous releases. The Ark Work does indeed feature a polarizing sound. While Renihilation and Liturgy’s second LP, Aesthethica, drew mainly on the black metal genre sonically, The Ark Work shows Liturgy incorporating a number of other diverse influences. Hunt-Hendrix’s formal background in classical music composition seems to have taken a paramount role on the record, which includes horns, bells and other instruments traditionally associated with classical rather than rock music. “Learning the rules for diatonic and chromatic harmony definitely had an effect on my sense of harmonic and melodic flow,” Hunt-Hendrix said. Electronic music and hip-hop also appear to have been important reference points for Liturgy during The Ark Work’s creation; glitchy MIDI instruments and Hunt-Hendrix’s chant-like rapping can be heard throughout the record.

Liturgy has gained notoriety for its authoritative live shows. In particular, drummer Greg Fox has become known for his virulent, unrelenting rhythmic sensibility. “Mostly, the live show is about sitting back and letting people watch [Fox] play drums,” Hunt-Hendrix said. Between Fox’s drumming, Hunt-Hendrix’s incorporation of musical influences unheard of for most black metal bands and the band’s overall desire to shed its controversial reputation, Liturgy’s set at the ’Sco looks to be an intriguing one.