On the Record with Claire Chase, MacArthur Fellow 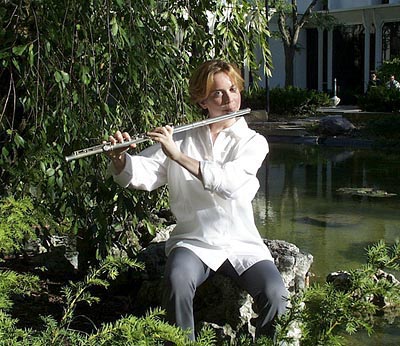 Claire Chase, who is a flautist, MacArthur Fellow and the co-founder of the International Contemporary Ensemble

Claire Chase, OC ’01, is a world-renowned contemporary flautist. The New Yorker and The Wall Street Journal have described her as “the young star of the modern flute” and “a rare combination of grace and guts”, respectively. She is a MacArthur Fellow and a cofounder of the International Contemporary Ensemble, a nonprofit collective dedicated to “reshaping the way music is created and experienced”. On Thursday, Chase was part of a panel titled “The Arts, Entrepreneurship and Higher Education”. The Review sat down with Chase to talk about entrepreneurship, the state of contemporary music and Oberlin itself.

Can you tell us a little bit about what you’ll be addressing tonight in the talk “The Arts, Entrepreneurship and Higher Education?”

Obviously entrepreneurship is the word du jour, and I think it’s become really tired and I’m actually not even sure if the term is useful for us anymore. This thing that was supposed to be about subverting the dominant paradigm and inventing and disrupting and having agency in many ways has been co-opted by the corporate world and, in some ways, by academic institutions as an agent of conformity, which is not my understanding of what that impulse is. It’s also recently been equated with neoliberalism, which is a very problematic place for the arts and higher education to be in.

Is the idea of entrepreneurship as it’s understood now stifling?

I think it is. The idea of invention has been turned into this thing that you’re supposed to learn like any other set of skills, and I find that very problematic. What I would like to talk about is the distinction between creating a model and nourishing a modality, a way of doing things, a process, because we never have a model. We never have a plan. We are always making things up. I believe that is at the core of any artistic, creative process that has integrity. It is similarly at the core of any organizational model that is going to support that model, and I don’t see those things as different.

What is it about the musical form of expression that appeals to you?

Music is the oldest, most abstract and most necessary form of communication. When you think about the sound a human makes as it comes out of the womb, that’s not speech, that’s sound. I would call it music. It’s as necessary as drinking clean water and eating food. For me, sound is the oldest and most elemental art form.

In what direction is contemporary music headed?

It’s headed in a lot of different directions. I don’t know that there is a singular direction for contemporary music. What very much excites me is that it’s moving in a porous way into other art forms. In 25 to 30 years, we won’t be making the same distinctions between a musical act, an act of performance art, of dance, of visual art or of conceptual art, and that’s very interesting to me. Stylistically, what’s so exciting is that it’s all over the map. ICE has been very committed to not aligning ourselves with one school of compositional thought or one direction. It’s what keeps us challenged. We have to be challenged.

Could you tell us a little bit more about ICE? What is its purpose?

What was Oberlin like when you were here? How has it changed?

I taught for Tim Weiss’ group [Oberlin’s Contemporary Music Ensemble] about five years ago and loved it. The ethos of it was the same. The one shift I find really encouraging is the idea of “What am I going to do? And what is my path?” becoming integrated into the conversations had here.