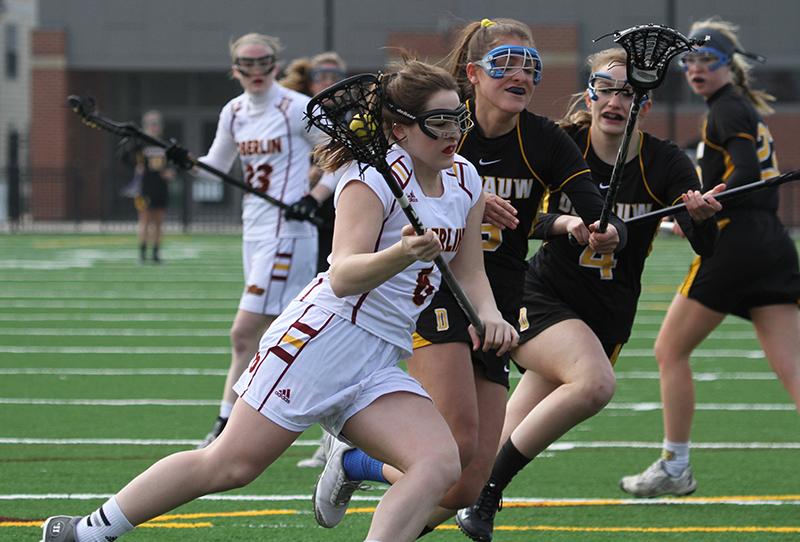 After a highly competitive regulation period, the Wittenberg University Tigers snapped the Yeowomen’s six-game win streak in a nail-biting overtime victory on Tuesday, April 7. With less than a minute left in overtime, the Yeowomen and the Tigers remained tied 16–16. But with just 26 seconds remaining on the clock, Tigers’ attacker, sophomore Becca Joseph, netted the game-winning goal, and Wittenberg walked away with its 26th straight win in North Coast Athletic Conference play.

Oberlin and Wittenberg exchanged leads seven times, including when junior Grace Barlow scored her fifth goal of the match to push the Yeowomen to a 16–15 lead in the final minutes of overtime. The Tigers then forced a Yeowomen turnover and answered with a goal to even score before ultimately pulling away with the victory. Barlow felt that despite the heartbreaker, the game reinforced the Yeowomen’s confidence heading into games with more top-tier competition.

“We just need to continue to play with composure and continue minimizing costly turnovers on attack,” Barlow said. “At this point, we need to believe in our abilities and believe that we can win against teams like Denison [University] and [The College of] Wooster. Wittenberg was exactly the game we needed to show us the level we can play at.”

The Yeowomen struggled to maintain possession throughout the contest, as they turned over the ball 32 times to Wittenberg’s 23. However, they did come out ahead in draws, holding a 26–10 edge over the Tigers. Sophomore goalkeeper Alexa L’Insalata, who had 13 key saves on a barrage of 30 shots, said that the frequent change of hand in possessions was a major element of the result.

“Some key factors of our loss on Tuesday were our own mistakes and turnovers,” L’Insalata said. “If we had cut even just some of those, it could have been a totally different game.”

With 20 minutes left in regulation, sophomore Morgan Daruwala led the Yeowomen on a 6–2 run by netting two goals and giving the Yeowomen their first second-half lead. The run also included three goals by sophomore Sara Phister, who led all scorers with six goals in the contest. Phister has already netted 27 goals in 10 games this season. With such a strong performance against the Tigers, who are currently 4–0 in the NCAC, Head Coach Lynda McCandlish found her team’s effort and resilience promising.

“Going into overtime, our team showed a lot of maturity and composure,” McCandlish said. “We tried our best to control the tempo of the game, but shots just didn’t go our way.’

L’Insalata similarly noted that continuing to play at a high level will be an integral part of the Yeowomen’s success in the coming games.

“We plan on taking the intensity of lacrosse we proved we are capable of into our game on Saturday and the rest of our games to come,” L’Insalata said. “I believe that our overtime loss to Wittenberg not only highlighted our strengths that we can capitalize on in future games, but it also sparked a fire within our team.”

After suffering their first conference loss of the season, the Yeowomen are currently 8–2 overall and 2–1 in the NCAC. The Yeowomen look to rebound on Saturday when they travel to The College of Wooster to take on the Fighting Scots at 3 p.m.