In the Locker Room with Merlin Hoffman and Alex Cheney 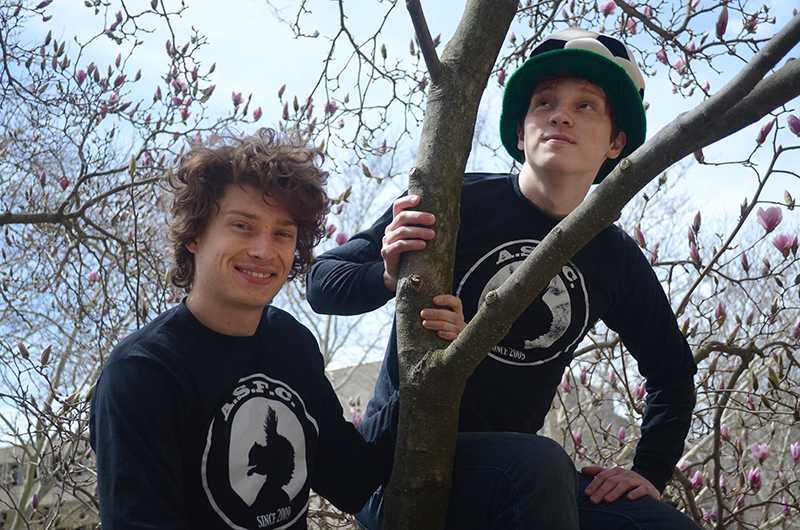 How often do you practice, and who organizes the practices?

Merlin Hoffman: During the fall season, we practice four days a week — Monday through Thursday. The practices are organized by the captains. Right now, I’m the only captain because Sarah [Mills] is studying abroad, but usually there are multiple captains.

Does your time commitment vary from fall to spring?

MH: Yes, it does. We play during the winter too. We get fieldhouse times and scrimmage in Williams [Field House]. In the spring, it’s what we can do, whereas in the fall, it’s a set season. We practice up until fall break and maybe a little bit after, weather depending.

Alex Cheney: Usually our fall season is ended by a combination of the weather and the daylight — maybe the second week in November. The spring season is always shorter because we don’t even get to practice outside until after spring break. And if there’s bad weather, which there always is because it’s Ohio, we don’t get to use the field until two or three weeks after break. We’re halfway through the third week of classes after break, and we haven’t practiced outside yet.

What is the most challenging aspect of playing on a club sports team?

AC: I think it’s just the balance of trying to keep it competitive, because it’s a step up from intramural, but you want it to be fun. I’m not saying that varsity sports don’t have fun, but club sports are certainly more casual. You also have to compete with the fact that there’s two ends of the spectrum and you’re right in the middle, so you have to strike a balance between keeping it fun and having a good community. I think one of the things that’s really cool about the Albino Squirrels is that it’s a co-ed team, and it adds elements that you wouldn’t find socially on a varsity team.

MH: I feel like when you’re a varsity player, you’re a lot more committed to your sport. Whereas in club, people want to be committed, but they also are really focused on their classes. As soon as classes pick up, it’s hard for a lot of people to stay committed to the team.

Is it difficult to keep members engaged without an official coach?

MH: It’s not too difficult to keep them engaged during the fall season because usually people show up, decide they’re going to be committed to the team and get in a habit of showing up. But I think it gets more difficult once you go into the break of winter period, and it’s more difficult without having an actual coach to get people to show up, both for our winter practice times and the spring.

How many people are on your roster?

AC: I managed the roster from 2013–2014 and we had upwards of 90 people on our email list at points. We had about 65 people sign up for the roster, we had about 30 people cleared to play medically and we had about 20 people consistently showing up for practices. Those are probably similar figures to last fall.

Did you play soccer before attending Oberlin?

AC: I played travel club in high school. I also tried out for the varsity team my freshman year, and I unfortunately had mono during the tryouts so I didn’t play very well. I would have liked another shot, but it wasn’t to be.

MH: I played mostly recreational soccer throughout high school and before. I dabbled a little bit in traveling and high school soccer. I do want to say that we also have lots of people who join the team who never had any soccer experience.

Does that result in a wide range of skill levels?

AC: There are also some people who have quit the varsity teams at Oberlin — both men and women—who come out and play club. So yeah, there’s a big range in skill.

Do you play other schools?

AC: We play in a league with Denison, Kenyon, Ohio Northern University, Wooster, Case and Ashland. All the teams are co-ed except for Ashland. When I first started on the club team, every few weekends we would have one game — and this is going back to fall 2010 —so it’s been a while. But in the fall of 2013, we started experimenting with a new format. Two teams would travel to a school, and we would play so that Team A plays Team B, Team B plays Team C and Team A plays Team C. So the teams that are traveling get two games in, and that’s actually a great way to get more bang for your buck.

MH: Generally, we don’t play a full 90 minutes. It varies depending on fitness, and teams usually converse about how long to play. If we are playing one game, we play the full 90, but if we’re playing two or three games a day, it’ll be closer to 35-minute halves.

What is your favorite part of being on the Albino Squirrels?

AC: Just playing soccer. I also really enjoy getting the opportunity to put it all together and do behind-the-scenes work, and that’s something that a varsity athlete maybe doesn’t get to do. You don’t get to plan practices and schedule games and things like that.

AC: That’s actually okay. I was really cringing until you said City. I support Liverpool Football Club and D.C. United.