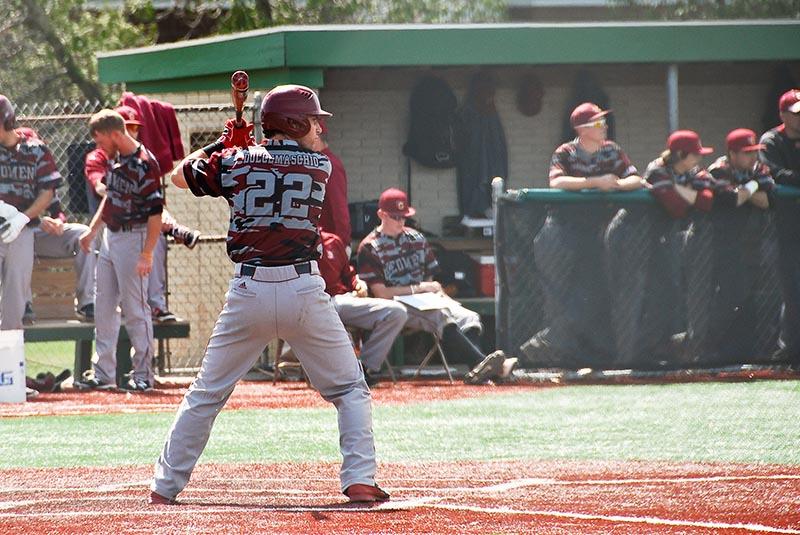 Junior catcher Blaise Dolcemaschio readies his bat in the first game of a doubleheader against the Kenyon College Lords last Sunday. Dolcemaschio went two-for-three with three runs scored in the contest as the Yeomen dominated the game from the outset, ultimately winning 16–2.

The baseball team played back-to-back doubleheaders last weekend against the Kenyon College Lords, splitting both sets to push its season record to 11–16.

On Saturday, the Yeomen struggled out of the gate as junior pitcher Harrison Wollman allowed six runs in the first inning, putting the team in a hole before it could take its first swings of the game. The Yeomen bullpen picked up the struggling starter thereafter, allowing just one run on three hits in 6.1 innings after Wollman’s departure.

The solid pitching came too late, however. Senior second baseman Kyle Decker and senior right fielder Andrew Hutson combined for five RBIs, but the team still fell just short, losing 7–6. The Yeomen put two men on with one out in the seventh and final inning, but senior left fielder Ryan Bliss flew out, and junior catcher Brian Hemmert grounded out to end the game.

After the game, senior shortstop Mitch Novak acknowledged the importance of playing consistently for an entire game.

“You just can’t have lapses in focus. That’s the main thing,” he said. “One bad inning, especially at the beginning of the game, can cost you. It’s a lot tougher to play from behind than if you have a big lead.”

Fortunately for the Yeomen, in the second game of Saturday’s doubleheader it was the Lords who slipped up and the Yeomen who took advantage. A seventh-inning Kenyon error led to four runs for the Yeomen, and pushed them to a 5–1 series-equalizing win.

Sunday’s games brought more inconsistency for the Yeomen; they dominated the first game, winning 16–2, before struggling in the series finale en route to a 14–4 loss. In the win, Decker and Bliss recorded three hits apiece, but the loss brought similar troubles as the team gave up five runs in both the first and fifth innings.

Overall, Head Coach Adrian Abrahamowicz was pleased with his team’s level of play, but like Novak, he said the team needs to do a better job avoiding lulls in its play.

“I thought we played really well all weekend,” he said. “We had a couple bad innings mixed in, which you can’t do. In baseball, there is very little margin for error.”

Now, the Yeomen turn their attention to another set of doubleheaders this weekend against the Allegheny College Gators. The Gators’ record sits at 13–6 in conference play and 27–14 overall, so the Yeomen know they have a tough task ahead of them.

Last season, the Gators took three of four from the Yeomen, but this year, senior captain, first baseman and pitcher Ben Whitener believes the Yeomen have what it takes to see more success against their conference rivals.

“This year, we think we have enough talent on the mound and at the plate to outplay them every game,” he said. “It’s just a matter of playing at a high level in as many games as possible.”

With 10 regular season games remaining, Abrahamowicz says the team’s attention is focused on finishing strong, winning the NCAC Crossover series and making it to the NCAC playoffs in Chillicothe, Ohio.

Whitener even went one step further, saying that the team’s goal is to host an NCAC Crossover game.

“We’ve been saying all year that our goal is to win enough games to host a crossover playoff series and then go and win our conference tournament,” he said. “So far, we’ve lost more than we’ve won, but we’ve played fewer games than anyone else in our division. 2–4 isn’t a great start, but we absolutely have the opportunity to finish in the top two out of five in our side, so that’s the goal.”

The team will look to take one more step toward achieving that goal this weekend, especially as they try to make good on their last regular season home games of the season. The games against the Gators will take place at 12 p.m. and 2:30 p.m. on both Saturday and Sunday.