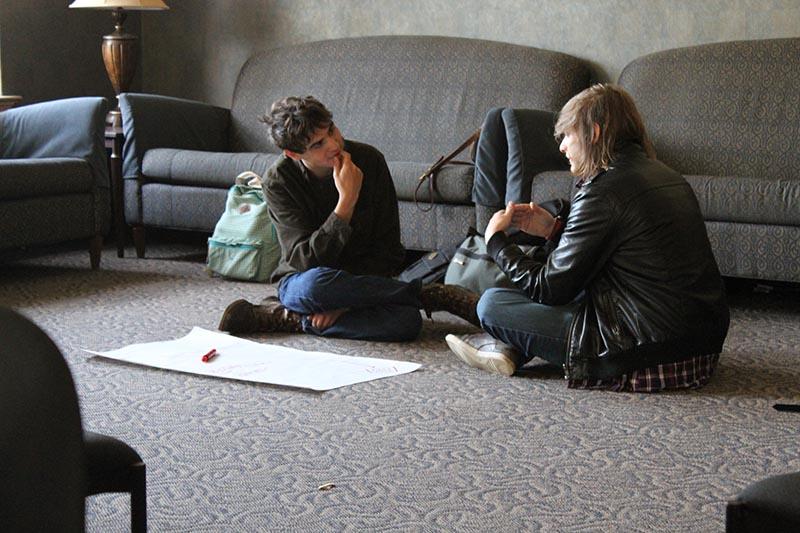 Double-degree junior Kirk Pearson (left) and College first-year Steven Levin engage in a lively conversation at the “collab-a-fest,” hosted by music, videos last Sunday. A joint effort by Studio B, WOBC and the Oberlin Film Co-op, music, videos will screen its final products at Mudd library later this semester.

Winer’s creative brainchild, music, videos is a three-way collaboration between the Oberlin Film Co-op, WOBC-FM and Live from Studio B aimed at encouraging musicians and filmmakers of all skill levels to explore the interdisciplinary potential between film and sound. By the end of the project, contributing artists will have produced a unified body of creative work while raising awareness about different arts organizations on campus.

As opposed to the first installation of music, videos — a microcinema screening that took place in the basement of Mudd library on March 5 — this second installation will rely entirely on original, student-made content. It also has a greater production bent this time around, as contributing artists will be given full access to Film Co-op supplies, including 16mm film and editing studios. Last weekend’s “collab-a-fest” began with a description of the project and brief introductions by those in attendance before progressing into what Winer called a “speed-date brainstorm,” during which each musician or musical group spilled their creative ideas onto a piece of butcher paper as filmmakers rotated to and from each station.

Only moments into the activity, the room was filled with eager conversation, enthusiastic handshakes and smiles. “There was a really nice creative energy in the room,” said College first-year, music, videos filmmaker and Review staff member Julia Davis.

For Winer, an active member of all three participating student organizations, experiencing this kind of energy only strengthened her extra-curricular ambition. “Seeing people here … smiling and talking about music videos makes me want to do more things,” Winer said. “It makes me feel good that I just rented a room in Wilder and put out a Facebook event, and now things are happening, and things are being made.”

Since she began school here at Oberlin, Winer has served as WOBC’s Winter Term station manager, WOBC’s current librarian and Film Co-op treasurer. As an active member of WOBC, she has also had the opportunity to work with Studio B, a WOBC project dedicated to filming and broadcasting musical performances from local and touring artists, making her the liaison between all three of music, videos’ organizational collaborators.

“[WOBC, Studio B, and the Film Co-op are] three really amazing organizations that have so much potential to collaborate together in really interesting [and] effective ways, and I kind of just want to push those collaborations together,” Winer said. “It’s an easy collaboration because the liaison is nice, and it’s me.” After organizing intimate, alliterative screening events among friends, like Twin Peaks Taco Tuesdays, and campus-wide art initiatives like music, videos, Winer has gained prominence among members of the film and music communities on campus.

According to Winer, music, videos is largely an effort to combat the hesitancy many people feel toward initiating artistic projects by providing a community of ample support, equipment, facilities and students eager to collaborate with others. “Our mission statement is to make and to make as much as possible,” Kopelowicz said at the beginning of Sunday’s “collaba-fest.” In this way, music, videos is, at its heart, an excuse for the creation of original artistic content.

“It’s really easy to put something together at Oberlin,” Winer said. “You just have to really want to do it and really love what you’re doing. I think I really love everything I’ve done here so far. I am excited to keep … doing new stuff, and I’m excited that people care. … People care! That’s a really beautiful thing.”

Aside from its purpose as a creative catalyst, music, videos is also a unique means of providing student art projects with the power to outlive their brief collegiate lifespans. Many of the musicians present at Sunday’s “collab-a-fest” cited their impending graduation as the primary reason for their interest in music, videos, saying they were looking to leave their mark with a final project before moving on to bigger and better creative feats after Oberlin.

Kopelowicz called music, videos “a document and testament to musicians who have come and passed.” The initiative fits well with other interdisciplinary arts projects — like Zoo and microcinema — that encourage similar sorts of collaboration.

Winer said she hopes the project will teach others to “make the most of things, … do what [they] want to do and provide services for people who are willing and interested but might not have the time or initiative to do it themselves. I always really like being a busy person and feeling like I’m involved in activities that help out the community or help out interested kids.”

For the sake of maintaining a laidback creative environment, Winer has yet to decide exactly when music, videos will be screened. However, the final screening, which looks to be a testament to the power of the individual through the spirit of collaboration, is expected to take place at Mudd during reading period.