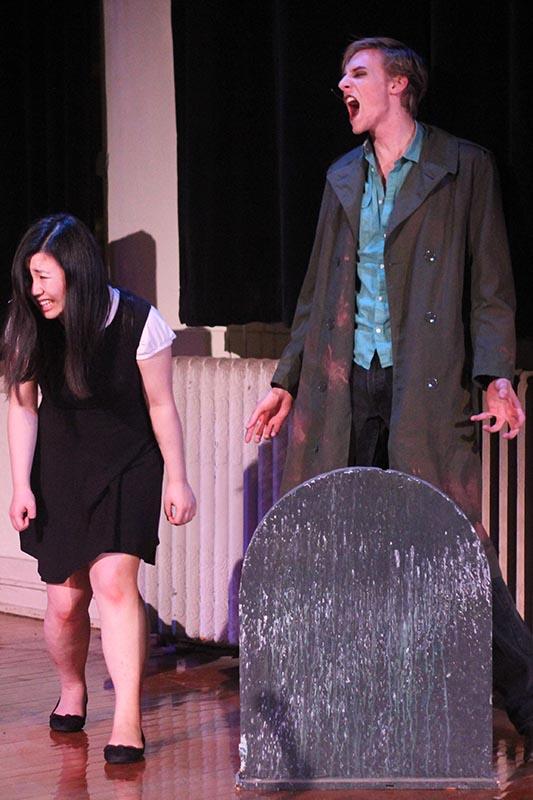 “Pro Tip: Don’t wear anything too nice to this,” warned senior TIMARA major Kaeli Mogg on the Facebook page for their senior recital, REPO: Testify!. I took this advice to heart and was happier for it. I obviously attended the event — which Mogg held in Wilder Main Friday evening and Saturday afternoon — fully expecting to have cinnamon-smelling fake blood poured down my back. I didn’t leave disappointed. Although there was a splash-free zone where audience members could sit unharmed and carefree, where’s the fun in that?

REPO is the semi-futuristic story of a world plagued by an epidemic of organ failures. GeneCo, a company that offers payment plans for those unfortunate souls who cannot afford replacement surgeries, surges forward. However, those who fail to pay must beware: GeneCo will repossess their property with a killer Repo Man.

Mogg directed and transcribed the script with the help of College first-year Rachel Dan, painted the set and both learned and taught the score by ear. Given that REPO was a recital, I attended assuming the music would be incredible, and Mogg did not fail me. I think it will take a good few weeks for the show’s main theme to finally dislodge itself from my ear, and I’m not complaining.

Beside the blood warning and my scarce preexisting knowledge of the show, I had few expectations. I wouldn’t immediately expect a musical to be a TIMARA senior recital, but to be fair, I’m not sure what I would expect at a senior TIMARA recital. Upon entering Wilder Main, I was struck by a variety of sights: a giant blue tar-mat, a slew of musicians sitting onstage, Mogg at the piano holding various other instruments, double-degree sophomore Griffin Jennings and College senior Illona Brand playing guitars and Conservatory sophomore Louis Pino taking the drums while encased behind a blood-preventative screen. I instantly knew I was in for something that you’d want to brag about to your cool aunt afterward. As I sat front and center in the garbage bag supplied to me by the corseted stage manager who greeted me at the door, I noticed four circular stages. On one stage, a bunch of actors stood, poised and ready; at the second, graveyard scenery; at the third, two more actors sitting on a bed; and at the fourth, nothing but a raised plank. Suddenly, music rang through the venue, the musicians strumming in time, setting the dark and exciting tone for the rest of the performance. During the first two acts, the audience was treated to a rare experience.

Not only were all of the participating musicians and actors successful, but they also looked like they were having fun. At one point, two blood-throwing Genterns — nurses who work at GeneCo — began dancing around, accompanying College fourth-year Mariko Wakayama’s song and grabbing various audience members, though we all wanted to get up and join in.

Certainly that sort of genuine interest in a performance is a unique response that does not happen at every recital. Though I’m accustomed to hearing “Now everyone come up and dance onstage” at the end of many performances, I never actually do. A few of the cast’s friends will come up, but for the most part, we all look at each other, eyes wide and smiles on our faces as we universally shake our heads saying, “Hell no.” At REPO, that was not the case. It was evident that the cast was having fun and the spontaneity that is embedded in a show like REPO was tangible.

At a school like Oberlin, we have come to expect great performances, perhaps creating many jaded audiences. But Mogg did something different, capitalizing upon classic Conservatory-taught skills and creating something unexpected from them. And, may I say, anyone that can employ skills that rival those of Paris Hilton — who played Amber in the film version — gets a gold star in my book.