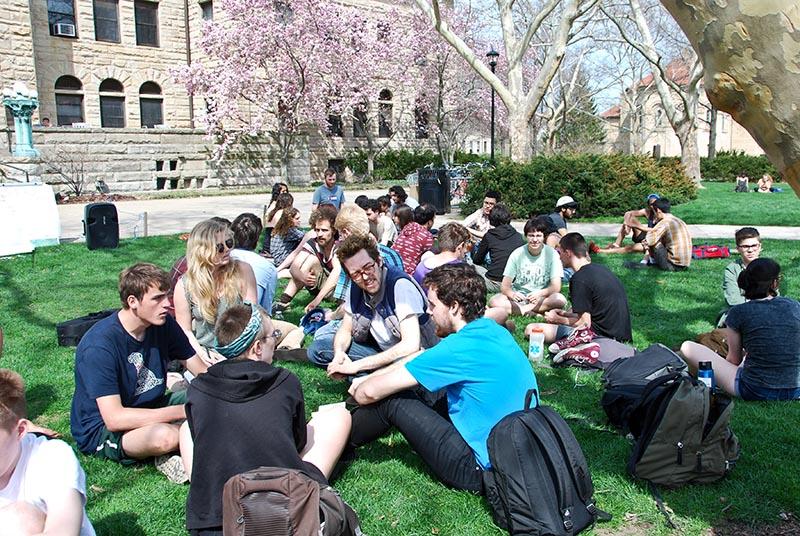 Students gather in small groups during a meeting last Saturday to plan a response to the rise in tuition. The groups drafted a series of demands that they feel would make the school more financially accessible.

On Saturday afternoon, College senior Zachery Crowell shouted out to a Wilder Bowl full of sunbathing students to encourage them to participate in a meeting to organize students against the College’s planned four percent increase next year in total cost of attendance.

Within the first five minutes, Crowell had five students. Ten minutes later the meeting had thirty.

“We are one of the most expensive academic institutions in the entire world and because of this we have much less racial and socioeconomic diversity than we should,” Crowell said at the meeting. “We need to ask ourselves: Is [this] the Oberlin we wan to be? I know I want an Oberlin with a diverse student body instead of one that runs the ratrace with other institutions to be prestigious in rankings.”

Toward the end of the meeting, students split up into three groups to organize student action.

One group finalized three goals to present to the administration. The demands were: a freeze in tuition until a better financial aid system can be developed; improved community-college relations, especially in light of land purchases by the College that some students described as gentrification; and better conditions and benefits for Oberlin workers.

The other two groups focused on community outreach and political action. They organized a series of protests, which happened every day this past week from 12:45 p.m. to 1:30 p.m. in front of Wilder Hall. The protests culminated in a rally that included further discussion of goals and a march at 1 p.m. today in Wilder Bowl. In addition, the groups circulated an online petition in support of a tuition freeze.

In response to the protests, President Krislov said that the tuition increases were necessary.

“Our model is tuition-dependent, and our costs are growing from everything to financial aid to other things,” Krislov said. “The truth is that we try to increase socioeconomic and racial diversity more proportionally on aid than pretty much anybody. … I mean, is there more we can do? Absolutely. But are we completely focused on working on this? Absolutely.”

“[The Oberlin Inn and the new athletic complex] are facilities that needed to be replaced. The Inn was at the end of its life, and [the] complex didn’t even have a women’s locker room. … Donations were given specifically for these facilities. We give a lot of financial aid and most of it is need-based aid. Our merit scholarships are mainly for the Conservatory to reduce competition, but that is an ongoing discussion.”