The Oberlin Review • May 1, 2015 • https://oberlinreview.org/8135/news/students-meet-with-frandsen-after-protests/

Students Meet with Frandsen After Protests 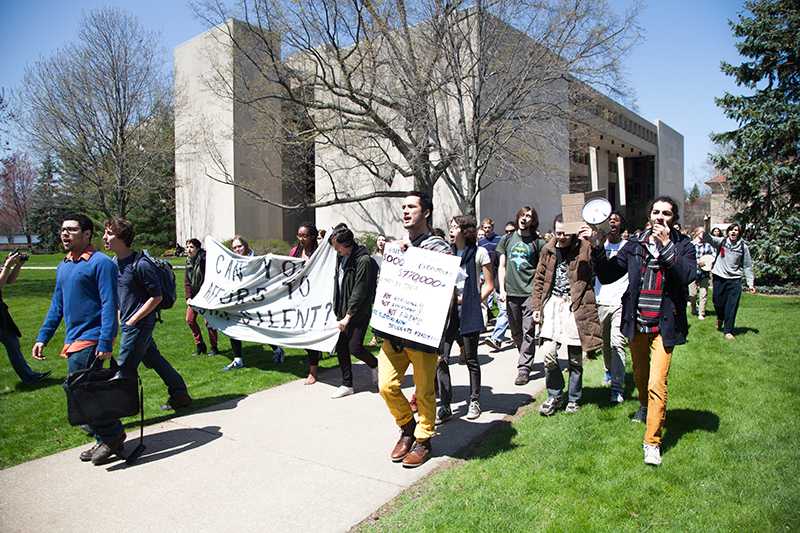 Protesters call for financial accessibility as they march across Wilder Bowl. The College declined the students’ request for a tuition freeze.

After students protested against the four percent tuition hike last Friday, 10 students, including members of Student Senate, met with Dean of Students Eric Estes and Vice President of Finance and Administration Mike Frandsen on Monday, April 27. During the meeting, they discussed student demands as well as plans for future negotiations to make Oberlin more accessible and affordable.

With the total cost of attending Oberlin rising from $61,788 this year to $64,224 for the 2015– 16 school year, the students involved in the meeting initially demanded a tuition freeze. College administrators rejected this proposal.

“We came up with the tuition plan because it seemed like the most immediate [way] to freeze the total cost of attendance, but the College obviously responded, ‘No, that’s not possible,’” said College senior Zachery Crowell, one of the chief organizers of the protests. “We fully expected that, but they also said no to things that they could do immediately for more information of metrics of economic diversity at this College and things like what the actual average student was graduating with in loans.”

Wanting more clarity and transparency, students used this meeting to understand where the money was going and how students could be more involved in the financial decision-making process.

Frandsen went on to say that 80 percent of the College’s revenue comes from the students, with 60 percent specifically from tuition.

During the meeting, students asked Frandsen how information concerning the College’s finances could be made more accessible to students. Frandsen responded that he held a presentation last fall where he asked members of Student Senate how he could get more information accessible to the students.

On Thursday, Frandsen held a meeting similar to last fall’s in Dye Lecture Hall to discuss the College’s finances. After the meeting, there was a question-and-answer session with President Krislov, Dean Chermonte, Vice President Kathryn Stuart and Dean Estes.

In addition to Thursday’s presentation, students plan to hold more meetings with administrators such as Dean Chermonte and President Krislov to find answers about how financial aid will be affected by the tuition hike.

Students have also begun to draft a list of demands that they collected from the student body to send to the administration.

“[We’re] drafting really clear demands for the administration in language that’s digestible for people who sit on the financial board of this College,” said College first-year Sofia Smith-Hale. “Another main task that we’ve been working on is thinking about the demands not solely regarding financial accessibility but workers’ rights and accessibility for the disabled, who are struggling with all sorts of other things. We’re really trying to take into account other people’s needs and desires and make sure people are heard.”

The list will incorporate a variety of demands, including moving from providing merit aid to need-based scholarships, loosening on-campus dining and housing requirements, reducing food waste and temporary workers in Campus Dining Services, cutting certain administrative pay and strengthening relations between the College and the city of Oberlin. The students also hope to establish an Accessibility and Affordability Committee that would include students, administrators and Oberlin residents.

In President Krislov’s weekly column on Thursday in The Source, he defended the tuition hike by saying that freezing tuition would necessitate painful budget cuts.

“If we do not raise tuition, we probably could not replace the revenue we would lose in the shortterm and probably not completely in the longrun,” Krislov wrote. “We have been working and continue to work on generating revenue from sources other than tuition, including fundraising, bringing conferences and summer programs to campus and through partnerships with other institutions. But to make up a budget shortfall, we would have to reduce costs. Some reductions could be realized through greater efficiencies, and we are working on that. But we are already fairly efficient. So at some point reductions are likely to result in a degradation of the quantity or quality of the education and support services we currently offer.”

About 100 students participated in the tuition hike protest last Friday. The protesters marched through the Science Center, King Building, Carnegie Building and Bibbins Hall chanting, “They say tuition hike, we say student strike!” and “Stand up, walk out!” Some students and faculty not involved with the protest criticized it for disrupting classes. The protest ended in the lobby of Carnegie, where the students discussed their grievances and future plans.

“I thought the turnout was very strong and the overall protest achieved all its objectives,” Crowell said. “We had three local and two student newspapers cover us and almost 900 signatures all within one week of the General Assembly. This is a very pressing issue, especially for low-income students, students of color and international students, who are all disproportionally affected by rising costs.”

The Student Labor Action Coalition and Defending Oberlin Financial Accessibility planned to hold another demonstration outside of Wilder Hall today, International Labor Day or May Day. They plan to continue actions and demonstrations until the administration addresses their requests for more information and more student involvement with College finances.