ODC to Highlight Feminist Themes in Only Way 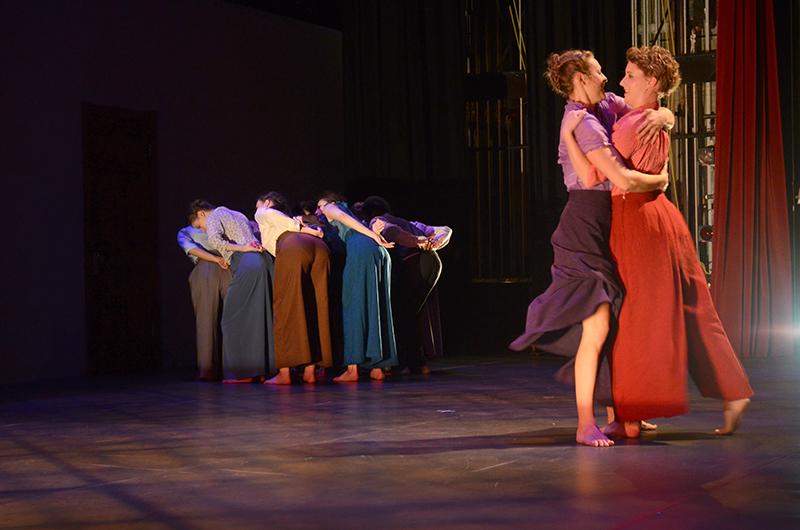 Jesse Wiener, who graduated in December, and College first-year Frances Purcell perform a duet in Oberlin Dance Company’s “The Only Way.” The show, directed by Assistant Professor of Dance Holly Handman-Lopez, will use partnering to communicate a narrative about suffragettes.

This Friday and Saturday evening, Visiting Assistant Professor of Dance Holly Handman-Lopez, Lisa Yanofsky, OC ’13, and Visiting Instructor in Dance Bobby Wesner will present Oberlin Dance Company in The Only Way, inspired by the suffragettes of the 1920s. The production will showcase live music by members of the Oberlin Percussion Group along with a soundscape by sound designer and Visiting TIMARA Professor Joo Won Park, and will also incorporate text and song.

Handman-Lopez, a beloved member of Oberlin’s dance faculty, has worked on ODC multiple times, both as a director and collaborator. “I have been the director of the whole enchilada a number of times,” she said. HandmanLopez added that she was most excited this year to be adding TIMARA elements as well as helping to design the set.

Composed of a cast chosen by a selective auditioning process, ODC is at its core a dance class. At the end of the class, dancers perform a long, complex piece in Hall Auditorium, much like a real-world contemporary dance company. ODC’s cast is typically hand-picked by the director

based on dancing skill, ability to capture the director’s style and previous dance performance experience, as well as special talents such as singing or playing instruments. Handman-Lopez noted that given her cast’s strong adaptability and willingness to “plow through,” she wouldn’t have cast the show any differently given the chance. “Every single person is bringing something unique and interesting,” she said.

Originally, when handed the responsibility of directing this year’s show, HandmanLopez said that she “didn’t have a fire in [her] belly for a piece [she] wanted to make or a story [she] wanted to tell.” Eventually, inspiration for the show emerged out of the Percussion Ensemble’s wood block performance of a Fritz Hauser piece, which she said reminded her of the sounds of an antique telegraph machine, rain-spattered windowpanes and galloping horses. Handman-Lopez constructed the piece after discovering a New York writer’s story of the British suffragette Emily Davison, who threw herself before the King’s horse at the derby in 1913 and was tragically trampled to death.

Although in the past the company has typically presented a relatively short piece alongside unrelated pieces, this year’s program will only be an impressively long 40-minute piece performed by the Company. HandmanLopez talked about the complexity of the piece in comparison to previous work she has done. “This is the longest, largest piece I’ve ever made,” Handman said, “So I went in knowing that it would be ambitious to create an eveninglength piece.”

Last year during ODC, Handman-Lopez performed an intimate duet with Wesner. Her background in contemporary-style partnering played a major role in this year’s piece. Students were required to participate in an additional partnering class co-taught by Handman-Lopez and Wesner, in which they worked on weight-sharing and other partnering techniques. “Part of it is real skill-building and how to use the body and physics,” Handman-Lopez explained, adding that the dancers incorporated contact improvisation methods as part of their training. She said that she has been excited to watch gravity and momentum come into play. In terms of partnering style, Handman-Lopez said that the dancers had been combining contrasting styles. “I come from a more roly-poly place and Bobby comes from a more balletic place,” Handman-Lopez said. “So we have a very broad range to work from.” College senior and OCD performer Nick Schrier explained that the partnering is often used to convey feminist themes within the dance’s storyline, often communicating male power over women. “A lot of [the partnering] is a lot more tumultuous,” Schrier said. “It involves a lot of male-female pairings with men really kind of roughing up the women. … It’s a lot of … women trying to achieve things and both men and women [characters] thwarting those efforts.”

After partnering classes, the Company often used reserved dance lab space to develop new movement for the show. Schrier explained that the cast has been rehearsing in Warner gymnasium from February to April for about three hours a day. Although Handman-Lopez originally anticipated incorporating sections of choreography she had premade in previous projects, the piece is made entirely of fresh choreography developed by the cast in addition to short dance phrases from Oberlin classes she has taught and that almost all of the show’s members have danced at one time or another.

Moving the piece from Warner to Hall Auditorium has been relatively smooth yet time consuming, according to Schrier. “There are a lot of light cues, so it took about 20 hours during the weekend to get through everything,” he said. For Holly, the joy of putting the piece together was in the process rather than the product. “What interests me, what I’m good at,” she said, “is finding different ways for bodies to interact and the humanity of it.”