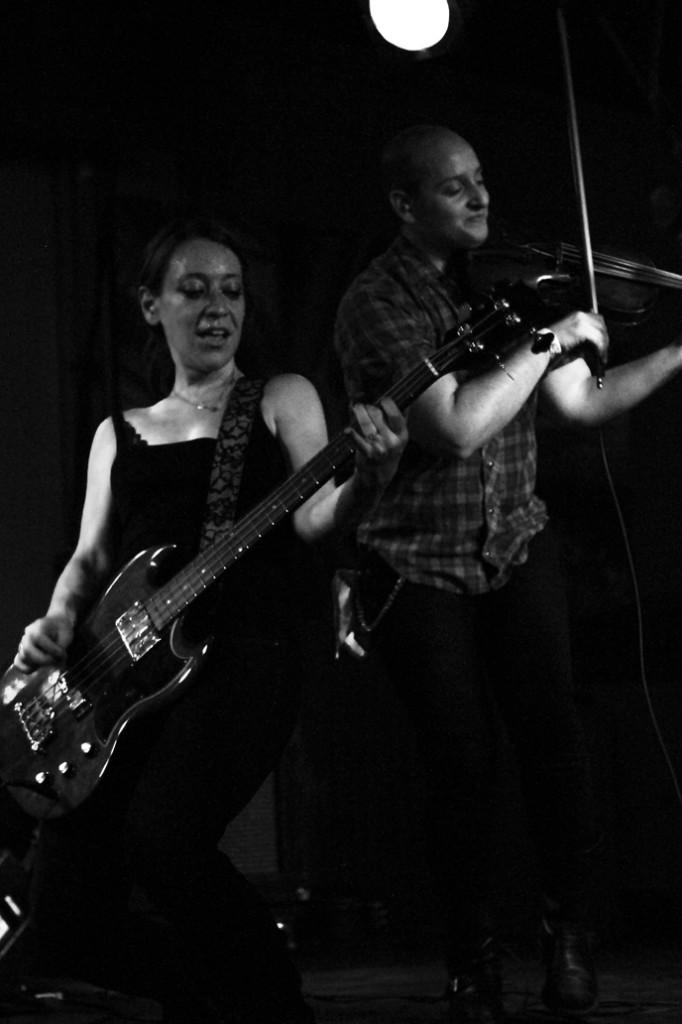 Shondes singer and bassist Louisa Solomon and violinist Elijah Oberman lock rhythms during their set at the ’Sco on Tuesday. The band’s eclectic mix of Jewish folk and punk rock ignited the space with a fervent energy that had the adoring crowd on their feet and dancing.

“There’s something about the way the sky is,” sings Louisa Solomon, the lead singer of the Shondes, in a song about those transformative nights when you feel connected with some form of the divine. “Maybe tonight will be one of those nights,” she told the crowd, and from the way their bodies followed the soaring of the violin and the thrashing garage-rock guitars, the Shondes had the kind of music to make that ecstatic connection possible. The event was Queer Beers, the song was “Nights Like These,” and Solomon’s voice, by turns fervent and intense, was then whispering and staccato over the discordant guitars — rough enough to jump to, lively and syncopated enough to dance to.

The Shondes are a four-piece indie rock band from Brooklyn with as much of a political presence as a musical one. The four met protesting the Republican National Convention in 2004, and by 2007 had released a debut EP, The Red Sea. Their music is a unique blend of Riot Grrrl, punk, traditional Jewish music, pop and folk. Hot on the heels of their debut came My Dear One, a breakup album in which the band displays a more melancholy, lush sound. On their newest album, The Garden, the band has hit its stride, with a clean sound Rolling Stone called “too wild to ignore,” full of propulsive beats and jagged guitar sounds.

The progressive politics of some of the songs can’t be ignored either, and the Shondes often blend music and activism through their lyrics or by playing at events for organizations such as Birthright Unplugged, which seeks to fill a gap in the Birthright Israel program by exposing participants to Palestine’s side of the story. The Shondes’ liberalism needn’t lose them fans who disagree though — their music feels so universal, and regardless of one’s politics, it was hard not to dance at their concert.

The band members seemed to feel as pulled by their own music as the crowd did, and their emphatic performance infused the ’Sco with energy this past Wednesday. Solomon’s voice is even more powerful in person than it is on record, and her energy and presence is effervescent and contagious. I never knew it was possible to dance as hard as Elijah Oberman did while playing a violin, but he somehow managed to pull it off, headbanging with Solomon while sawing out lilting melodies with unexpected beauty that layered over the garage-rock guitar sound and Solomon’s emotive vocals.

The fluctuations of the thickly textured beats reflected the band’s Klezmer influences, dragging almost to a dignified stop and then abruptly, delightfully roaring back with double the energy. Theirs was a brand of Eastern European folk-infused punk that sounds like a pop-ier, girlier Gogol Bordello. The band’s disparate influences were effortlessly blended into an eccentric, unpredictable whole that somehow felt complete and was impossibly catchy.

Between the Shondes’ politics and inspiring music, this group might be just what the world needs. They’re fighting oppression, but their songs ask you not to think too much. You might surprise yourself trying to figure out what the Shondes are working toward with their dense pop anthems, but when you suddenly look down and see you’re dancing without realizing it, you’ve decided you love this band.