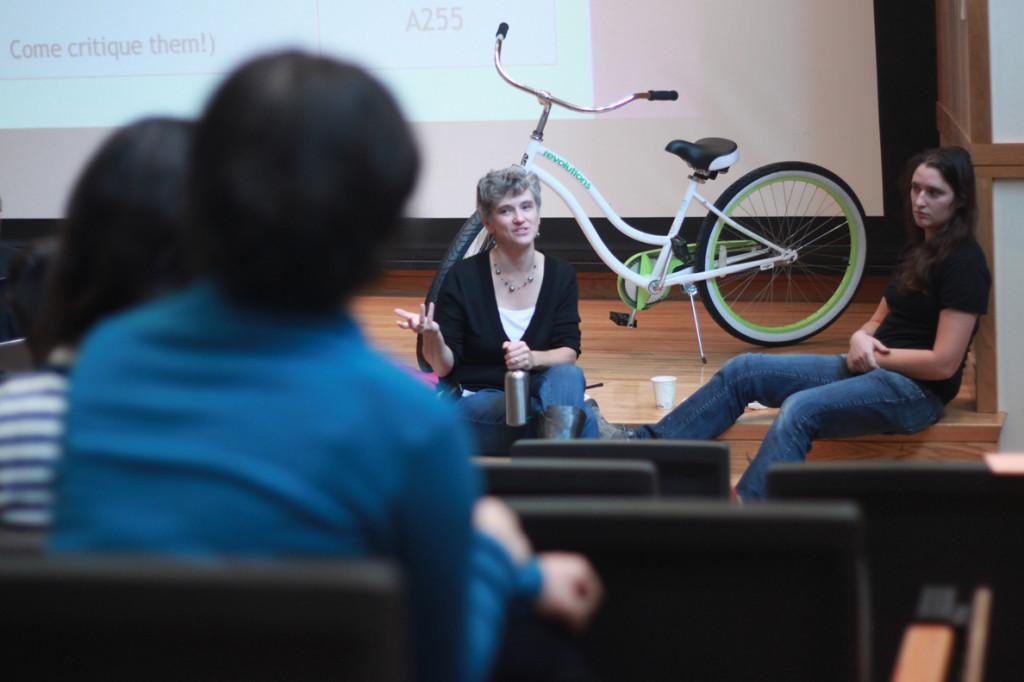 Co-Chair of the Energy Planning Committee Cindy Frantz and Sustainability Coordinator Bridget Flynn ran a workshop Saturday that served to educate attendees on the College’s exorbitant emission of carbon gases. After the main forum, students broke off into several interest groups to further discuss more innovative ideas of cutting down the school’s carbon footprint.

This past Saturday, approximately 90 students and faculty spent the afternoon at a workshop to discuss innovative ideas of how to create a carbon-neutral campus. If these various ideas are implemented, the campus would most likely achieve the goal of being carbon neutral by 2025. According to many of the student and faculty environmentalists, one of the most important factors is the willingness of students to cut down on individual choices of electricity and water usage.

The workshop was led by Co-Chair of the Energy Planning Committee of the Oberlin Project and Associate Psychology Professor Cindy Frantz and Sustainability Coordinator Bridget Flynn, as well as several students who led individual groups on topics such as efficiency, recycling and current ideas that could soon be implemented.

“We’re here because students asked for this. Last fall there were discussions for how we will replace our central heating plan. So last fall we had several sessions, and in the spring we will have members of other campuses tell us how their campuses are becoming more carbon-neutral,” Frantz said.

To be carbon-neutral essentially means that an individual or institution must be achieving net zero carbon emissions. Any processes that emit carbon dioxide — such traveling by car or plane, or gas burning energy production — will add to the carbon footprint, while conserving water, planting trees and turning off the lights in most campus buildings will help reduce it.

According to Flynn, natural gas is being used to help supply Oberlin as it tries to secure other sources like geothermal energy. The addition of “energy zones” — locations on campus that use renewable energy — are also an important part of the plan.

“Energy zones are going to be regionalized, using electric compressor technologies. So things like the Adam Joseph Lewis Center with ground source heat pumps and the Allen [Memorial] Art Museum are already using these methods. The reason we would change the central heating plan is, of course, because it would be renewable energy. So even if we use more electricity, the source would be renewable,” said Frantz.

Flynn said that in the spring, Oberlin is planning to close the coal plant that has been providing power to some of the buildings on campus. However, while adapting the heating and electricity systems will definitely help achieve carbon neutrality, Flynn said the rest lies more on our own daily lives. Even though new building adaptations can help, “10 to15 percent of the plan to become carbon-neutral is based off of behavior change,” according to Flynn.

“That means [doing] your piece. Everyone who lives and works on campus is affecting the carbon inventory by choosing how to go about their daily activities. That means walking or taking your bike to work, and taking shorter showers. Carbon offsets, such as tree planting, are also important for us to offset our carbon usage,” said Flynn.

At the transportation panel, discussion centered around the possibility of decreasing Oberlin students’ use of air travel, as well as how to make bikes more viable to people than cars. One local noted that in Cleveland there is public bike parking where bikes can be stored for the winter, and that the vacant Kohl building parking lot could potentially be used for bike storage. College first-year Helen Kramer said that she was in support of a lot of the new plans made at the transportation panel.

“I feel that many useful and unconventional ideas came out of it, such as limiting travel emissions by creating one-week break ExCos so that students are more likely to stay on campus over break.” Kramer said.

“I think the College could benefit from looking to the town for more input. Oberlin is really leading the charge toward carbon neutrality, while the College seems to me like it’s dragging its feet. If community members have ideas about how to utilize College resources in this manner, they should by all means be consulted,” Horne said.

As it stands, some smaller colleges have already gone to a carbon neutral campus, one of the most notable being Colby College, which became carbon neutral in 2013.

But Cindy Frantz is confident that Oberlin can become a carbon-neutral campus as well. Frantz says that little things like re-implementing recycling bins in smaller rooms and being aware of the temperature are an important part of it.

“The big thing is people think that thermostats do nothing at all. But they work more slowly than people think. You can turn it all the way down to shut the heat down. But you actually can’t because you have to protect the building from the pipes freezing. It means that people misuse the thermostats,” said Frantz.

However, some new plans are being made to help motivate people to conserve energy.
Frantz added that, “One idea that wasn’t generated in the peanut gallery was working to have there be some financial incentive to conserve water and electricity in the dorms. Is the dorm successful at saving the College money?”

This idea has already been implemented on a larger scale, as 19 gas plants have eliminated tons of wasteful gas in order to earn financial credits.

Former Oberlin Environmental Studies major and head of the Oberlin Education Outreach group Cuy Corey Patrick Harkens OC ‘12, says that collecting rainwater might be a way to both reduce carbon use and protect nearby water sources from pollution.

“I think a city-wide water catchment system, rather than the current system, where all the water goes into storm drains, could then create a gray-water system to significantly reduce flash flooding that the Black River experiences with large rain events. As most know, this area used to be very swampy, such that the water filtered slowly through the watershed. Now, the fields are drained and roads paved and fields planted, such that water flows straight into the creeks and rivers,” Harkens said.

College first-year Sam Horne says that other aspects like wildlife conservation and communication between trustees and students need big improvements.

“The plan for the energy zones should move forward ASAP, with the natural gas transition from the central heating plant’s coal to renewable sources happening with no time wasted. The College’s reforestation projects should be expanded greatly in scale; the amount of turf grass maintained by the College is unconscionable, said Horne.

“If we really want carbon neutrality, it’s the students who are going to have to put the pressure on, and for that we need more transparency from the trustees, and more student-trustee communication.”