The Oberlin Review • May 8, 2015 • https://oberlinreview.org/8229/news/students-lobby-trustees-for-fossil-fuel-divestment/ 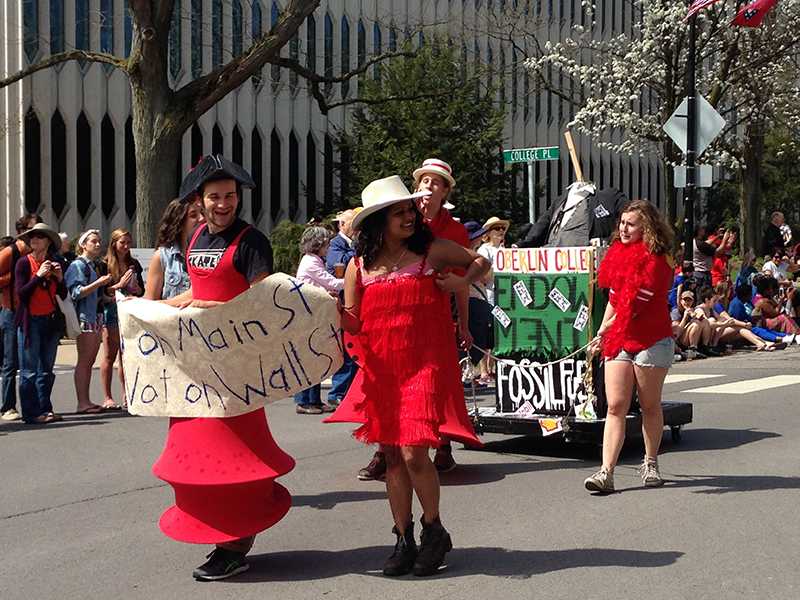 A group of students in favor of divesting the College from fossil fuels march in the Big Parade on Saturday, May 2. Students have submitted a divestment proposal to the Board of Trustees.

A group of five students — College sophomore Ellie Lezak, double-degree sophomore Hayden Arp, College sophomore Jasper Clarkberg, College first-year Naomi Roswell and College senior Stephen Lezak — is pushing the Board of Trustees to approve its proposal to divest the College’s endowment from fossil fuels. The Board is currently in the process of deciding how to proceed and may begin discussing the issue at its next meeting in June.

Last June, the Board of Trustees released a divestment resolution that created a specific institutional pathway for divestment proposals. The resolution required successful proposals to meet three criteria.

“The proposal had to show how investments in the target companies ‘shock the moral conscience,’ in the language [the Board] used. It had to be supported by the Oberlin community and it had to have a specific negative impact on the companies,” said Roswell. “And so our proposal addressed those three topics.”

The students began working on their proposal when they discovered that the College did not have a plan to divest from oil companies.

“It came as a surprise to all of us that Oberlin didn’t have a fossil fuel divestment movement already, and [we] were at a Trustee forum at the beginning of the year in October when Stephen [Lezak] asked about divestment, and [we] talked about it a little bit after, just introducing ourselves, and it just grew from there,” Roswell said. “We are not a specific organization; we’re just five people who came together to write a proposal.”

John Petersen, Paul Sears Distinguished Professor of Environmental Studies, argued for divestment by describing how divesting from fossil fuels had previously proved financially beneficial for the city of Oberlin.

“Three or four years ago now, the city [of Oberlin] decided to vote down a long-term investment in coal-fired electricity,” Petersen said. “The Oberlin Municipal Power and Light was being pressured to make a long-term investment in a new coal-powered fire plant, along with 30 something other local municipal utilities. Oberlin was one of two communities to vote down that investment, and because we voted down, we saved a lot of money because that plant was never built, and all of the communities that voted yes for that fossil fuel investment were in for planning costs that we saved for voting it down. We saved over a million dollars by voting it down.”

Petersen also said that refraining from divesting from fossil fuels would harm the College’s chances of reaching its goal of becoming carbon-neutral by 2025.

In the final portion of the proposal, the students proposed that the Board of Trustees oversee a reallocation of any direct endowment investment holdings over the next two years in the top 12 companies responsible for greenhouse gas emissions globally.

“Together, these corporations and their predecessor companies are responsible for 24 percent of global greenhouse gas emissions between 1854 and 2010,” says the proposal. Among the 12 companies, some of the biggest emitters listed in the proposal include the Chevron Corporation, ExxonMobil, Saudi Arabian Oil Company and BP.

The students hope that if the College divests from fossil fuels, other academic institutions will follow the College’s practices.

To promote this proposal, the students looked for endorsements from different groups on campus. They received letters of support from the Committee of Environmental Sustainability and Student Senate, both of which were published in the Review last week.

“Our goal, as Student Senate’s voice, as representatives of the student body, is for a larger push for it, so that we hope that our participation will lend more legitimacy to the work of the smaller group of students who are pushing for divestment by showing that the student body’s representatives are in support of divestment from fossil fuels,” said Student Senate member and College senior Molly Brand.

In addition, the students have received letters of support from different student organizations and two alumni groups: EnviroAlums and Oberlin Alumni for a Responsible Endowment. The five students said that they have been trying to work collaboratively with the Board of Trustees, as well.