The Oberlin Review • May 8, 2015 • https://oberlinreview.org/8251/arts/oberlin-tradition-thrives-in-musical-union-show/ 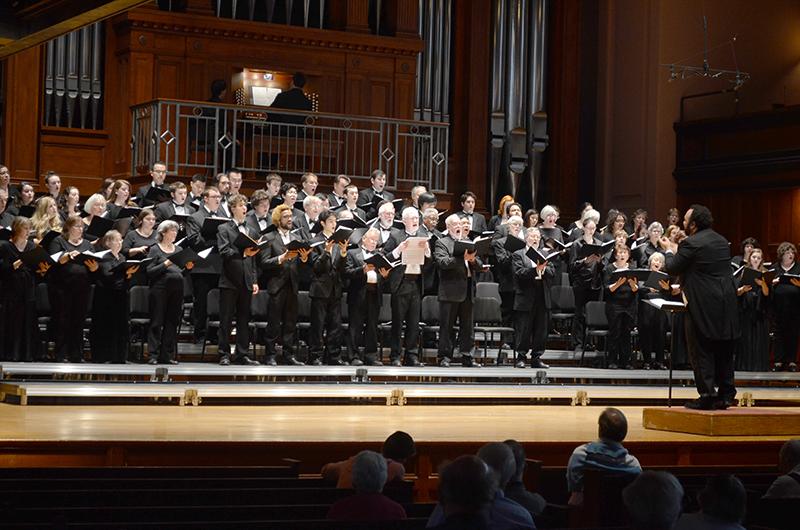 The Oberlin Musical Union, an impressive combination of College Choir members and Voice majors, as well as other community members and College vocalists, has been an Oberlin tradition for 178 years. Their Sunday Concert upheld high expectations set by the collective over the years. The choir jolted into George Frideric Handel’s “Zadok the Priest” with a strong burst of energy. Though the performers sang with only the organ as musical accompaniment, there was no apparent lack of gusto. Notably, the choir managed to flawlessly navigate the complex rhythmic structure of the piece, leaving Finney Chapel in dead silence after its final “hallelujah.”

The choir’s next piece, a sweeter composition by Herbert Howells titled “O pray for the peace of Jerusalem,” began simply and grew slowly more complicated. The singers’ monophonic voices began to vary with one another, creating an odd sense of comfort. The choir displayed a similar level of virtuosity in its first piece, although the sopranos got a little too carried away with vibrato. Although the singers were strong individually, the aggregate of voices created an overwhelming amount of noise.  In the middle of the piece, the intensity of the voices decreased. This turn initially seemed chant-like but gradually reached similar complexity to the first half of thepiece. As it progressed, there were times when the voices sounded disparate, though through no fault of the singers. The disparity emphasized the togetherness of the voices that in the end prevailed, which perhaps related to the message of text: to strive for unity in the city of Jerusalem.

The choir finished its performance with a very familiar tune: “Jerusalem” by Charles Hubert Hastings Parry. The execution was well paced and the performance did not last too long. After the choir sang its last note, it received a standing ovation from the audience. Overall the performance was impressive and met the standards set years ago by the choir.