The Oberlin Review • May 8, 2015 • https://oberlinreview.org/8284/sports/intramural-softball-championship-approaches/ 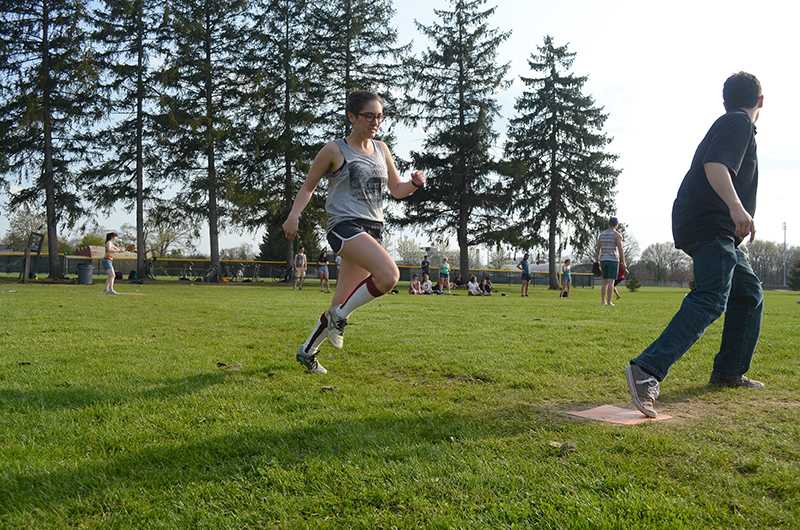 Senior captain Maisy Byerly sprints to first base after a hit against the Skinflutes last Sunday at North Fields. Byerly and the rest of the 40–40 Club will compete against the Pecan Sandies in the intramural softball championship game this Saturday at 4:45 p.m. at North Fields.

The 2015 intramural softball season will soon come to an end, and with the championship games being played this weekend, teams are preparing for their final bats this season and, in some cases, for their entire college careers.

While some students dabble in the sport, other students, such as 40–40 Club senior captain Maisy Byerly and Skinflutes senior captain Dylan Cohen, have committed four full years to playing on the makeshift baseball diamonds on North Fields.

Byerly has been a team leader since her first year, gathering the same core group of players to play softball each spring.

Her commitment to the game stems from a long career of softball, including a few weeks on the varsity team at Oberlin.

Even after graduating this month, Byerly plans to continue playing softball. Soon after Commencement, she’ll head to China as a Shansi fellow, and there she’ll try to start her own league.

“It may have mixed success, or maybe it will be really successful,” she said.

Byerly’s fellow teammates rave about her, and she is responsible for recruiting much of the current team. One team member, senior Clark Sacktor, dislocated his shoulder on a throw from left field earlier in the season, and even then Byerly stood by his side.

“[Maisy] is one of the best leaders I’ve ever had,” he said. “She always brings us up when we’re down, and even when I got hurt, she was there for me.”

Cohen has also long been a staple of IM softball, and Director of Recreation and Club Sports Betsy Bruce singled him out as one of the true heroes of the intramural game.

“Dylan is just one that sticks out,” she said. “He was so personable at the captains’ meeting, and he cares a lot.”

Asked why intramural softball was so special to him, Cohen simply responded, “What’s better than playing sports and drinking with your best friends?”

Now that the season is ending, Cohen feels nothing but love for his teammates and the game.

“I’m really sad, honestly. I love intramural. It’s one of the two reasons I feel like I can survive at this place, with the other being the Jazz program,” he said. “I have put my heart and soul on the field all four of my years, and I feel like I’ll never be whole again in some ways.”

This past Wednesday, Byerly and Cohen rallied their players and, with their season on the line, competed in a semifinal matchup for the chance to head to the final round of competition. Last season, Cohen’s squad got the better of Byerly’s in the playoffs, but an early season 10–8 victory over the Skinflutes had her feeling confident heading into this one.

The two teams have long been rivals, and their games seem to carry more intensity than other intramural matchups. The team’s last game ended on a walk-off hit by senior and Review Sports Editor Nate Levinson, and last year’s playoff win for the Skinflutes came late in extra innings.

“Last year we had an incredible game,” Cohen said. “Dare I say the most intense sports moment of my entire life?”

Despite the palpable competitive tension on the field on Wednesday, Byerly and her teammates refused to give in to the stress.

The Skinflutes struck first with a run in the top of the first inning, but the 40–40 Club came right back with a run of their own in the bottom of the frame. Later Byerly’s squad took advantage of some defensive miscues to take a 5–1 lead. They carried that lead into the top of the seventh, but the Skinflutes refused to go down without a fight. They plated two runs and put runners on second and third with two outs, bringing the winning run to the plate in the person of junior Randy Ollie. With the game on the line, Ollie hit a long fly ball to right field, but senior Jack Redell made a one-handed running catch to end the game and clinch a spot in the championship round.

Despite the end of long careers for Cohen and Byerly, intramural softball will likely be a staple at Oberlin for years to come.

“I just give the sign-up sheets to the RAs at the beginning of the year, and then everything works itself out,” Bruce said. “It’s mostly individual students, like Maisy and Dylan, who rally their troops. This year, I even had to turn a team away because we had a full 16 teams sign up.”

The 40–40 Club will take the field one last time when it faces the younger Pecan Sandies on Saturday at 4:45 p.m. on North Fields in the championship game.