The Oberlin Review • May 8, 2015 • https://oberlinreview.org/8294/sports/in-the-locker-room-with-nate-levinson-and-tyler-sloan/

In the Locker Room with Nate Levinson and Tyler Sloan 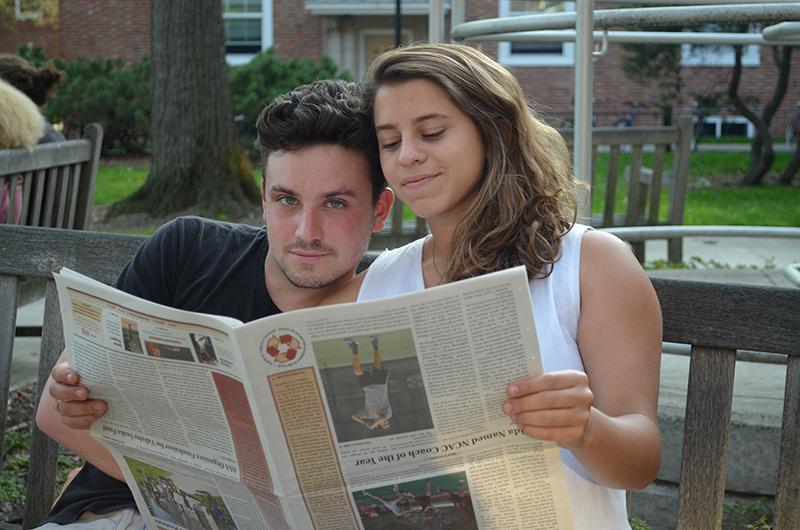 This week, the Review sat down with itself, Sports Editors Nate Levinson and Tyler Sloan, to discuss their favorite parts of the job, why they were initially interested in the position and their favorite co-editors.

What made you want to be a Sports editor for the Review?

Tyler Sloan: I started writing for the Review at the beginning of my freshman year for the Sports section and I really enjoyed it. I had really good editors, and then I realized the editor of the Sports section was in my journalism class, and I had a huge crush on him. I was like, ‘Oh my gosh, how can I work with this guy?’ I applied to be a Sports editor and was rejected at first, but eventually the Review came to its senses and I was hired, and it’s been great ever since.

[Editor’s Note: The person to whom Tyler is referring is our own Nate Levinson. She would like to clarify that she is not serious and has always dreamed of working for her college newspaper.]

Nate Levinson: A good friend of mine, Max Sugarman, OC ’13, was the Sports editor my second semester sophomore year, and he recommended that I start writing for the section — I was going to write for Bleacher Report over the summer — so I wrote a couple articles. I actually got to write a couple editorials for the section, which would never be allowed now. He had a lot of senioritis, so I did that part of his job for him once in a while, and I also wrote a couple articles on the tennis team. I really liked it, so I applied to be a Sports editor after writing about five articles, and I was lucky enough to get the gig and start up junior year.

TS: My favorite part, aside from actually writing and editing, is being in the office with everyone. I’ve really enjoyed getting to know everyone who works at the Review; it’s a really cool group of people, and I’ve learned a lot from them. My least favorite thing is when we don’t have enough writers, which happens quite often, and we end up writing the entire section. That can be stressful, but it’s also been a learning experience in its own way.

NL: My favorite thing about the section is getting to write an editorial every other week because I get to write about national sports topics. That is really something I’m more interested in than anything else. I love learning about athletes here and Oberlin sports culture, and I’ve learned so much about that, but really my favorite thing is writing the editorials. My least favorite thing is probably the fact that I have to get up at about 8:15 a.m. on Friday mornings to make sure the section is okay.

[Editor’s Note: The Editors-in-Chief doubt the validity of this claim.]

What is the coolest thing that’s happened to Oberlin athletics during your time as Sports editor?

TS: Speaking from personal experience on the women’s soccer team, it’s been really great to see my team evolve. With each freshman class that comes in, the team’s been better and better. My first year was a big building year, and this season we won nine games in a row, which was really exciting for our program. I think that’s reflective of the trends in a lot of different programs. The women’s lacrosse team had a great season, as did the women’s basketball team. It’s cool to see the teams continue to get better in the conference.

NL: During my first semester as Sports editor in the fall of 2013, it was cool to see the men’s soccer team have the success that they had. Brandt Rentel, OC ’14, was an All-American goalie, and being able to cover a team that is successful is so much more fun.

What advice would you give future Sports editors at the Review?

TS: I would say it’s really important to embrace your role as Sports editor. There are definitely times when the section doesn’t feel as important as other aspects of the paper, but you just have to make it your own. I’ve gotten to talk about a lot of important issues in the sports world, from trans inclusion to focusing on club sports that haven’t been featured before. It’s easy to make it just another job, but really taking the time to get to know the people you’re working with has been a rewarding experience for me.

NL: I would tell them to keep an open mind about Oberlin athletics. I think that athletes here get a bad reputation sometimes, but I’ve met a lot of great people through this job, and not just on varsity teams but also on club teams. I think if you go into it thinking that you can meet a lot of great people through the job, then you can really get a lot out of it, and it will really show in your volume of work.

If you could improve one aspect of the Sports section, what would it be?

TS: I would write all of the editorials. Sometimes my co-editor doesn’t really carry his weight on that end, so if I could do that every week for the paper, I would do that.

NL: I would have to say the same thing. My editorials are really just superior, and they always have been; this is nothing new. I’m just a better writer than my co-editor, and I wish she would just take orders from me. We’d definitely be better off then. On a serious note, I think that if we could have an entire issue in color, that would be cool.

Who has been your favorite co-editor to work with?

TS: By default, Nate is the winner, but it has been a huge pleasure to work with him.

NL: Definitely Rose. Maybe Rose. Rose or Sarah, I can’t really think of anyone else who could even be in the discussion. Just kidding, Tyler is the winner.