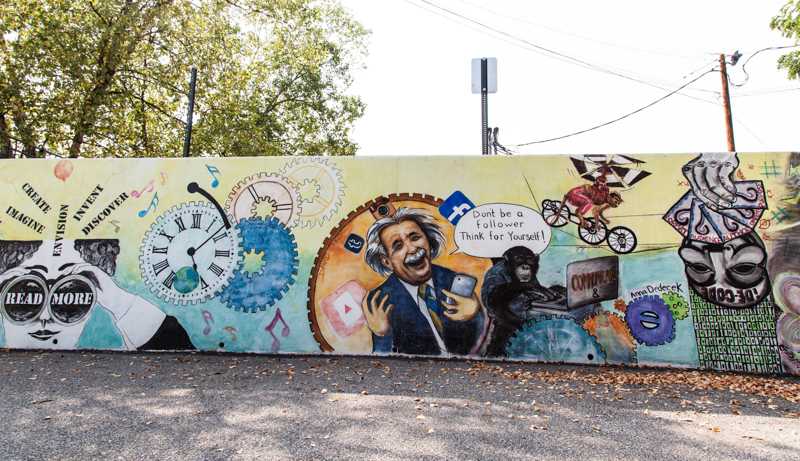 A mural outside the Oberlin Public Library showcases work from a team of artists led by Laura Dahle. Artists including James Peake, Claudio Orso-Giacone, Gregory Cross, Terry Flores and David Baker designed this thought-provoking image during the Oberlin Chalk Walk in June.

On a June afternoon this sum­mer, children and adults alike held brilliant pastels in their hands and sprawled themselves across the sidewalks of downtown Ober­lin. Vibrant images emerged from the pavement outside Hall Audi­torium, one of the prime locations to create drawings during Ober­lin’s 10th annual Chalk Walk. Soft sandstone pavement serves as a great palette to blend colors, and its smooth texture creates an ex­cellent canvas. Despite scattered showers as event organizers set up chalk distribution stations, the rain stopped around 9 a.m., allow­ing ample time for participants to construct their works of art.

Amazingly, the Oberlin Chalk Walk has only been postponed once because of rain, although it has sometimes rained just hours after the Chalk Walk ended. Barry Richard, the founder and orga­nizer of the event, expressed his disappointment about this unfor­tunate reality, however he noted that chalk artists have a differ­ent perspective. “Especially the professional ones go, ‘That’s just the nature of the medium, of the art.’ There’s nothing you can do about it,” Richard said. “And de­pending on how much it rains, it will fade … so it gives the piece of art a different look over time as it weathers.”

Additionally, the temporary nature of chalk art is key to the event and makes it easy to orga­nize. Trimmer noted the city and local businesses readily grant permission for artists to take over the sidewalks for a day, whereas installing permanent art might add another layer of logistics.

Because the chalk art is im­permanent, taking photos of the creations and uploading them to social media sites has naturally become a means to preserve the pieces. The event is extensively documented by both professional photographers hired by Chalk Walk organizers and the College, as well as by community mem­bers who take pictures of their own works. Chalk Walk organiz­ers upload many of these photos to the organization’s Facebook page and website, while commu­nity members post them on their personal social media platforms including Facebook, YouTube and Flickr.

This year, organizers decided the event website needed a new look. “We felt it was time to up­date the website because one thing it was lacking was a lot of imagery,” said James Peake, the education and outreach coordi­nator at the Firelands Associaton for the Visual Arts. “The Chalk Walk is all about the imagery of all of these amazing pieces of art that the public comes and produces. You never know what’s going to appear on the sidewalk, and there’s just so much artwork everywhere, so we wanted a new website to help showcase it, which we weren’t able to do as easily be­fore.” Curator of Education Jason Trimmer, who works at the Allen Memorial Art Museum and helps organize the Chalk Walk, hopes that in the future images will be compiled onto one site.

Trimmer also noted the useful­ness of Facebook as a tool to reach out to people. “What I found, es­pecially this year, is people would tag themselves if they saw their work,” he said. “So [Facebook] is nice because [it preserves the art], but you’re also kind of get­ting that critical engagement that people always talk about.” Addi­tionally, Trimmer said that social media was useful for connecting Oberlin Chalk Walk to events that happen nationally and around the globe. Trimmer hopes that through these web connections, artists who participate in Chalk Walk will become known at a national level. Connecting with other chalk festivals also allows Chalk Walk organizers to glean ideas and inspiration from other chalk events.

Originally, Richard got the idea to start Chalk Walk in Ober­lin from photos of 3D chalk art on sidewalks in Europe that a friend showed him. “There’s this really cool illusion that’s created where you have to stand at a very specific spot, but when you look at the sidewalk it looks like this art is just popping right off of the ground,” Peake said. “If you view it from any other vantage point it looks very distorted, very elon­gated; you have to be standing at just this one spot, but that right there is just this ingenious ap­proach to the medium.” Despite this modern approach to chalk street art, the tradition of chalk art dates all the way back to Re­naissance Italy and artists who drew images of the Madonna on streets in hopes of receiving do­nations from passersby.

While chalk on sidewalks has historically been temporary, Laura Dahle, a community mem­ber involved in many festivals in Oberlin, started a tradition of do­ing chalk art on the wall in the parking lot of the Oberlin Public Library. Unlike the other cre­ations, this mural is sprayed with fixative and remains throughout the year. Then a team of artists collaborates to refurnish the wall with a new image during each Chalk Walk. Peake often helps create the mural. “Some years we want it to be more thought-provoking, while other years, it’s more of an element of beauty,” he said.

However, keeping a balance between promoting Oberlin and keeping the event simple has gotten harder as Chalk Walk has gained popularity. This past summer, the walk had 915 registered participants — more than five times as many as its first year in 2006. In City Council discussions about food truck guidelines, some suggested Chalk Walk as an event where food trucks could come. But Chalk Walk orga­nizers worried that trucks at the event would draw business away from local restaurants and stores. Chalk Walk also re­ceived queries from nonprofit organizations wanting to set up booths at the event. “We don’t want people setting up things and impeding the flow of traffic,” Trimmer said. “The point is to walk and give the sidewalk space to the artists.”

The positive homespun feel that Chalk Walk organizers have cultivated also permeates the art. “If you’re there on the day of Chalk Walk, and you’re walking around town, there is this really positive vibe going around. I think that a lot of that vibe kind of translates through the imagery. A lot of the pieces are really clever, or they’re funny,” Peake said.

The inclusive and accessible nature of the event also adds to the overall ethos. The event is completely free and pro­fessional-quality pastels are provided. The event organizers also hire and support four to five master artists from out of town plus five to six local artists, to create large-scale works. The artists gain visibility through the event, and are also paid for their work. Additionally, Chalk Walk runs free work­shops for children in summer camps and day care programs in Elyria and throughout Lorain County. Children learn tech­niques such as blending chalk and creating 3D letters.

“The reason why I think it works so well is that most anybody has picked up a piece of chalk, scrib­bled something on the sidewalk or even just used chalk on a chalkboard,” Peake said. The medium of chalk itself is acces­sible to all ages.