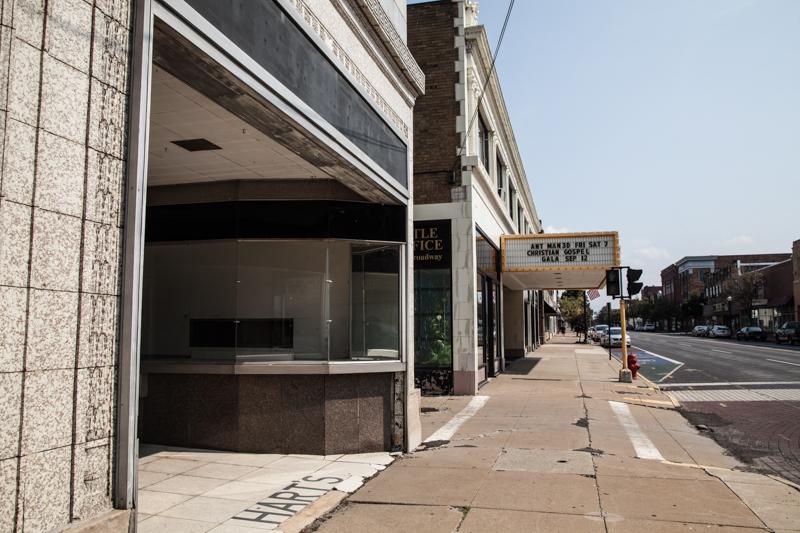 Lorain County’s Broadway Avenue will be the site of the new FireFish Arts Festival. James Levin, the festival’s organizer, envisioned the event as a way to revitalize a neglected area of town.

Just up the road in Lorain, Ohio, a festival is heating up. On Sept. 26 from 4 to 10 p.m., the FireFish Festival will rock the lo­cal arts scene, bringing people together for an evening of food and drink, music and movement and, as the name might suggest, fire breathers. The venue? A stretch of empty storefronts and quiet alleys on Broadway Avenue in downtown Lorain.

Some of Oberlin’s own artists will perform alongside featured acts Grupo Fuego, The Great Lakes Light Opera, Sheela Das and the Cleveland Shakespeare Festival, as well as giant puppets made by local youth.

The festival is coming togeth­er under the artistic direction of artist, attorney and cultural activist James Levin. Levin is known for founding Cleveland Public Theatre and launching the Gordon Square Arts District, the Ingenuity Festival, Cleveland World Festival and The Bridge Project. “The idea behind Fire­Fish is not simply to ‘do’ another festival but to bring attention and life to a beautiful but under-used — and to a certain degree aban­doned — industrial downtown,” Levin says. “[The arts] bring peo­ple together, celebrating human expression and showing people like investors and Lorain govern­ment people a glimpse of what could be if the spaces were acti­vated year-round.”

FireFish is also perfect for Obies, Levin says. “You would not be at Oberlin if you A: did not want to change things; B: were not adventurous. FireFish allows you to do both. The idea of com­ing to something in its inaugural state should be pretty exciting. Here you have an opportunity to explore an old industrial town basically now on life support. The steel mills have all but left, the Ford Motor Co. is just a ves­tige, American Ship Building is gone [and] the industrial pillars have been decimated. What is left? Beautiful downtown va­cant storefronts, charmed alleys, abandoned courtyards,” he says. “What happens when the wand of art and music transforms these spaces into something more active, vibrant and magi­cal? Students and others should see this — the very beginning of something transformative.”

A few students already have. President’s Public Service Fellow and double-degree senior Caylen Bryant provided artistic leader­ship for youth employed by the program over the summer. Some students also worked with Fire­Fish during their Day of Service. College senior Anna Droege, who is assisting with graphic design, was particularly struck by the vision and aesthetic cohesion she observed in Levin’s program­ming leadership. Double-degree fifth-year Ben Rempel, who will be performing with an emerging music ensemble, finds motiva­tion to participate in a desire to spread out beyond the boundaries of Oberlin’s arts scene. “After performing so much in Oberlin, I want to get into the outside world more,” Rempel says. “This is an opportunity to work — not directly collaborate with — but at least work with artists who are part of a larger world than the Oberlin College bubble. I can’t expect people to support me without also supporting other things going on in the area, and this is also an opportunity to perform for oth­ers and see what that offers.”

Levin has a broader context in mind for FireFish, as he has for many of his previous endeavors. “I have fo­cused on how art can enhance the quality of life through­out my career,” he says. “Art and music can at first bring people together and then sustain the energy, like CPT at the Gordon Square Arts District.”

The reality of what “sustaining the energy” will look like in Lorain remains to be seen and brings with it questions of gentrification. Even as it brings apprecia­tive outsiders into Lorain, FireFish and the redevelop­ment of the city may shape the voices and visions of Lo­rain’s own residents in unforeseen ways. When FireFish takes off this year on Lorain’s Broadway Avenue, it will offer both an evening of celebration and magic as well as an opportunity to establish precedents for radical com­munity partnerships.