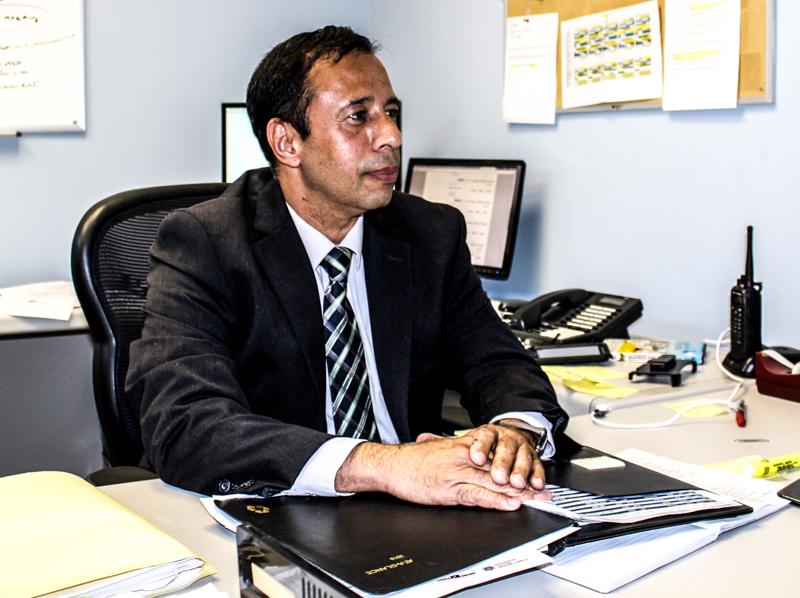 Juan Torres, the new Oberlin police chief, works at his desk. Torres has stated his desire for instituting community policing and adding more women and people of color to the force.

Oberlin announced the hiring of new Police Chief Juan Torres following a national search to fill the position this summer. Torres joins the department after serving with the Alexandria, VA police department for 24 years in four different positions, most recently as police chief.

The Virginia native was hired through an extensive process of gathering community input, narrowing down candidates and interviewing the top nominees, City Manager Eric Norenberg said. A panel consisting of community members, including an Oberlin College student, ultimately made the appointment.

“We gathered input from the community and the City Council as well as the police force about what would make an ideal candidate, and launched recruitment on a national level around February,” Norenberg said.

Norenberg added that Torres’ previous experience in Alexandria gave him an edge over other candidates.

“I was impressed that [Torres] presided over a community with a lot of diversity, a lot of different people from different backgrounds with different wants and needs,” Norenberg said. “That’s helped him stand out, and it’s great that he’ll bring that to the table.”

Torres started his position as police chief on Aug. 3, and now heads the office of 24 full-time employees. He said he is focusing on building a community policing program in Oberlin.

“I want to create opportunities for police, College and community interaction,” Torres said. “I want you guys to know what we do and vice versa. I want policemen to be able to go to communities and for them to tell me what kind of policing they want.”

In line with his vision for a more accessible police department, Torres said he wants to increase the department’s social media presence and host events that allow for community members to interact with officers. He also said the creation of police-liaisons that cater to specific communities is in the works.

“Instead of people calling 911, I want them to have a go-to person,” Torres said.

Torres added he has plans to increase the involvement of people of color and women on the force, and said he will allow the community to have more say in policing policies.

“A big part of this problem is that we need to make our policies known to the public so there aren’t any surprises,” he said. “We also need to ensure that every complaint is investigated completely and fully.”

“The Oberlin police force is currently just as problematic as other police forces in terms of racial profiling, escalating instead of de-escalating situations and a bunch of other things,” Bautista said. “And I don’t think having a minority police chief will help. If you’re a part of the system, you’re corrupted. For me, as a minority, seeing him as a minority joining the police department just seems like a slap in the face.”

Still, Norenberg says Torres’ appointment and future policies will reflect a trend towards learning and advancement.

“We need to learn the lessons from other communities and apply them to Oberlin,” Norenberg said. “We were already doing pretty cutting-edge stuff with technology, but it’s good to see us grow on other fronts, too, like community policing. I’m looking forward to seeing Oberlin continue to advance.”