In the Locker Room with Koryn Kraemer and Trenton Bulucea 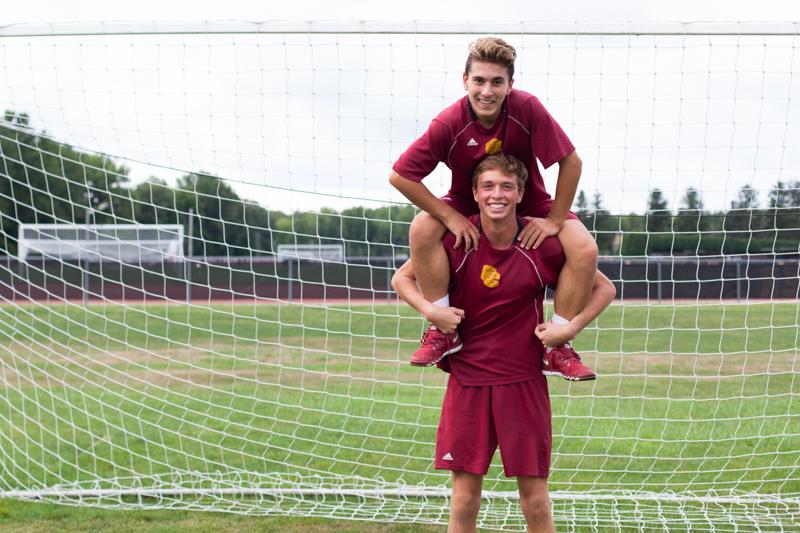 This week, the Review sat down with men’s soccer first-years Koryn Kraemer and Trenton Bulucea to discuss the Yeomen’s California ad­venture, their goals for the upcoming season and how it feels to start their careers as varsity athletes.

How was your recent trip to California?

Koryn Kraemer: California was really sunny! It was wonderful to spend quality time with the team — on and off the field — in an interest­ing and rich part of the country.

Trenton Bulucea: The trip to Cal­ifornia was fantastic! Between the sightseeing, the matches we played and the experiences we shared to­gether, it was a trip I’ll never forget. It’s just a shame that we could not have stayed longer.

KK: This season, I expect to reach the [North Coast Athletic Conference] championship game and compete for the title, a goal I think our whole team shares.

TB: We have very high hopes for this season. We know the talent we have, and our goals for the season reflect this mentality.

What has the transition been like from high school to college play? What would you say has been the toughest part?

KK: The speed of play in college was a little overwhelming at first, and even though I’m a goalie in net, I can tell the physicality is also more demanding. But after acclimating to the physical standards, it was re­ally just the mental preparation for practices and game day that were difficult for me.

TB: For me, the transition from high school to college soccer hasn’t been much of an issue. The only tricky part is that, as a smaller player, the opposing players that we face are sometimes much bigger and taller than I am. I’m used to this though, because I’ve experienced it throughout my entire soccer career, so it’s just a matter of sticking to what I’m good at.

Are there any games you are par­ticularly looking forward to?

KK: Honestly, I look forward to the next game every time there is one. The best way to take a sea­son is in small steps, and so right now, I am really looking forward to Waynesburg this Friday.

TB: I’m particularly looking for­ward to some of the rivalry games this season, specifically with Deni­son University and Kenyon College. Those games are always special, with so much passion on both sides and both teams dying to win the game. They should be lots of fun!

What have the upperclassmen taught you guys about prepara­tion for games and practices?

KK: The upperclassmen have been true leaders, not only in the way that they hold us accountable for high intensity levels and focus, but also in the way they have wel­comed us into the soccer family. Within two weeks of being on cam­pus, we developed a tight-knit bond and a team character that I think will serve us very well this season.

TB: The upperclassmen have been very helpful in easing fresh­man into the soccer experience. For games, they especially get the team hyped up and focused at the same time to execute things in games we’ve practiced all week long. The same goes for practices; the upper­classmen are the most vocal, which pushes everyone to do their best.

How is it playing for Coach New?

KK: Coach New maintains a competitive but enjoyable prac­tice environment, which made the grind of preseason less daunting. Most importantly he has offered great guidance off the field about academic life, community resourc­es and time-management that have made the first couple weeks of col­lege more doable.

TB: I really love playing for Coach New. He has actually been watching me play since my sophomore year in high school, because he coaches a local club team that my club team frequently played against. Through­out the recruiting process, he as­sured me that I would fit in to the team just fine, given Oberlin’s play­ing style, and he was exactly right. I am currently playing the same posi­tion that I have always played, but his version of my role on the field is a little different than I’m used to, so I’ve had to change my play a bit. But I’m getting the hang of it.

Can you tell us a little about your wins against Pomona-Pitzer and Otterbein University?

KK: Pomona was a team that was both physically and tactically below our level. And to be com­pletely honest with you, the first half was a poor showing where we failed to successfully build our at­tack [and made] foolish turnovers that created opportunities for the other team. Fortunately, the one positive takeaway was a high work rate, which when continued into the second half and, when coupled with some tactical adjustments, al­lowed us to completely dominate the second half. We deserved the win, and when our goal finally came with 11 seconds left to go, we were all ecstatic. Otterbein came out hard and caught us mentally un­prepared. But eventually we calmed the game down [by] controlling the pace and the mood of the game.

TB: The Otterbein win was a bit special for me because I scored my first career goal to tie the game up in the first half. The Pomona win was also special because the winning goal came so late in the game, and the pure jubilation from the bench and from the players on the field was really something to remember.

If the team wants to have a suc­cessful year, what should you fo­cus on?

TB: If the team wants to have a good year, we need to focus on both sides of the ball. So far, our defense has been very solid, but our offense has been struggling a bit. We need to take every practice and game se­riously and push each other to play to the best of our ability because we are going to come against some very good opposition throughout the course of the season.

KK: If we want to succeed, we have to focus on composure, com­munication and consistency. I feel we’ve done well with the second two, but at times, both in the Ot­terbein and the Occidental College match, we began to lose our heads, which is not the calm playing style we’re going for.

How does it feel to be contribut­ing so early in your careers, with you two only being freshmen?

TB: Honestly, it’s a dream come true to contribute so much this early in my career. I love the game, and I love this team, so I’m glad to be doing everything I can to con­tribute to the team’s success.

KK: I came here with the desire to be the starting keeper, and I will continue to make sure that I have earned my position. It is a blessing having the opportunity to compete so early in my career, but I don’t want to think about myself as a freshman this season. I am just a player on the field doing my best for the team like everyone else.