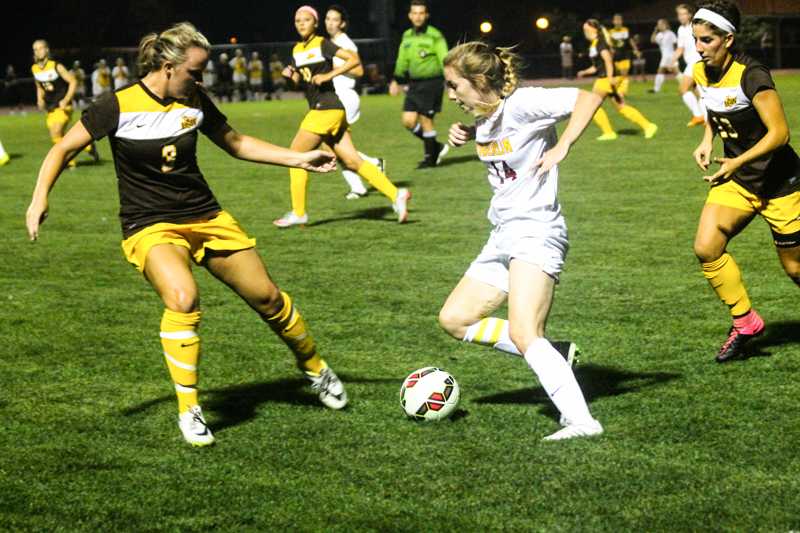 The Oberlin women’s soc­cer team tied its home opener against Baldwin Wallace Univer­sity 1–1 on Tuesday night, mov­ing their record to 0–2–1 for the season.

It was Oberlin sophomore midfielder Caitlin McCuskey who opened the scoring early, capi­talizing on decisive service from junior forward Taylor French to bypass Baldwin Wallace senior keeper Emily Tallmadge. The goal came after just 1 minute and 20 seconds and was the first of Mc­Cuskey’s collegiate career.

It wasn’t until late in the first half that Baldwin Wallace evened the score. Senior forward Kelsey Nemeth delivered a stinging at­tack from the Yellow Jackets, snagging an errant pass from Oberlin’s defense and shooting one past first-year keeper Jor­dyn Morris. However, Morris was impenetrable for the rest of the game and finished with five saves.

“She is doing really well in goal and communicating well with the team, which is key as a goalie,” said senior midfielder Ellie Hui­zenga about Morris. “Yesterday she really stepped up and kept us in the game.”

Despite Oberlin’s early score, the remainder of the game was everything but net.

“The rest of the game was a battle, where we knew Bald­win Wallace would capitalize if we made a mistake,” Huizenga said. “Although we played hard throughout overtime with many chances, we were just not able to close the game.”

Oberlin allowed the Bald­win Wallace defense little rest, recording 18 shots with 10 on goal, their accuracy besting their opponent’s six shots on tar­get. Though their efforts didn’t translate to the scoreboard, the Yeomen maintained their energy throughout the second half and beyond regulation play, seeing several promising runs and shots from sophomore forward Gwen­nie Gardiner.

“Overall our work rate and in­tensity were top-notch, and we just made a few errors that unfor­tunately caused a goal for them,” said senior defender Tricia Souza.

“MVP for the game would defi­nitely be Josie,” McCuskey said. “She played nearly the entire game and was beat down over and over with no fouls called. I was really impressed with how tough she was both mentally and physically controlling the middle of the field.”

Even without the win, Head Coach Dan Palmer was happy with the Yeowomen’s play.

Yeowomen take the field on Friday, Sept. 11 at 7:30 p.m. for a home game against Waynesburg University and again on Sunday, Sept. 13 at 4 p.m. for a game at Defiance College.