Big Red Surge Past Yeowomen in Second Half 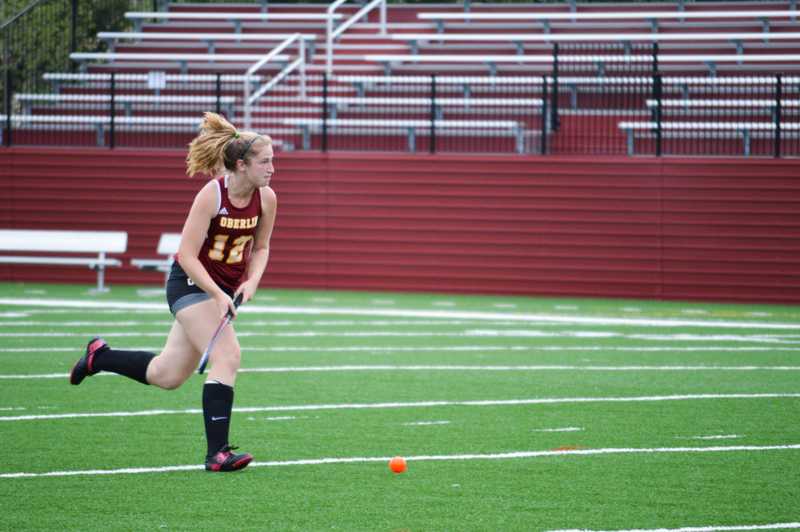 Junior attacker and Review Business Manager Maureen Coffey dribbles toward a breakaway on Bailey Field. The Yeowomen fell to a late-game surge by the Denison University Big Red during their home opener on Wednesday, Sept. 9.

Unable to counter a strong second-half surge by the Denison University Big Red, the field hockey team fell 6–1 at the Austin E. Knowlton Athletics Complex this past Wednesday. The loss puts the Yeowomen at 0–3 for the sea­son and 0–1 in the North Coast Athletic Conference.

Following a competitive first half in which neither team surrendered a goal, the Big Red began the second half firing on all cylinders. Denison un­leashed a barrage of 23 shots in the sec­ond session with six finding the back of Oberlin’s net, three of which came within the first 11 minutes of the half. The Big Red finished the game with 40 total shots, 28 of them being on goal, whereas the Yeowomen finished with seven total shots and only four on goal.

Senior captain Taylor Swift attrib­uted the tempo shift to a drop in the Yeowomen’s energy and focus.

“Going into the game we all had a ton of adrenaline, which helped us to connect both offensively and defen­sively in the first half, but we didn’t maintain it going into the second,” said Swift. “We held Denison, [the] NCAC fi­nalist from last year, 0–0 the first half, which was absolutely incredible, but I think knowing that caused us to go into the second half a little complacent.

Despite Denison’s late-game domi­nance, one bright spot for the Yeowom­en came at the 63 minute, 27 second mark, when junior forward Maureen Coffey dribbled past the defense and deposited her second goal of the sea­son. Coffey said later that the Yeowom­en were taken off guard by Denison’s halftime adjustments.

“Denison changed the way they played in the second half,” Coffey said. “They pushed almost their entire team into our defensive circle, which we were unprepared for. It took a while for us to adjust to such an aggressive style of play.”

Despite the result, junior attacker Ariana Enzerink commended her team for its effort, while acknowledging the merit of Denison’s play.

“We fought hard and our defense was stellar,” Enzerink said. “Denison was able to play very offensively pretty much the entire game, and they had a lot of shots on goal and some of them were bound to go in.”

Junior goalie Maggie Gossiaux was one example of the stellar defense to which Enzerink referred. She finished the game with 22 saves in her 70 min­utes in goal.

Leading up to Wednesday’s match, the Yeowomen fell to the St. John Fish­er College Cardinals to the tune of 8–1. The match was highlighted by a late goal by Enzerink, who finished the match with three shots on goal.

Reflecting on the season so far, Head Coach Tiffany Saunders had nothing but praise for how well her team has been working together and the im­provements she has seen.

“So far this season I love the cohe­siveness of this team on and off the field. They are so supportive of one an­other, and there is always a lot of posi­tive feedback,” Saunders said. “A chal­lenge for our sport is not talking on the field, so we’ve worked on small changes to speak up, and doing so has definitely translated to us connecting our passes more consistently.”

The Yeowomen will travel to Gran­ville, Ohio, this Sunday to take on the Johns Hopkins University Blue Jays.