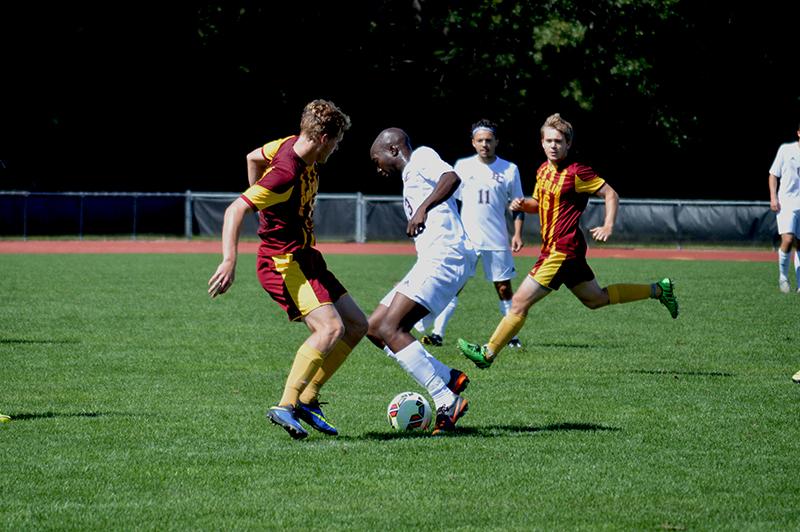 Sophomore forward Timothy Williams attempts a tackle at midfield against the Quakers of Earlham College. The men’s soccer team beat Earlham 4-1and is currently 4–2 this Season

The men’s soccer team ended its three-game winning streak against the Grove City College Wolverines this Wednesday, suf­fering a 4–3 defeat in its oppo­nent’s hometown of Grove City, PA.

Oberlin’s defense buckled down quickly, successfully fending off a barrage of offensive attempts from Grove City early in the first half. First-year keeper Koryn Kraemer made a quick series of three saves before allowing a goal by Grove City senior forward Seth Loew in the 20th minute. The Yeomen were quick to return the offensive pressure, though, forcing play into the Wolverine’s defensive half for the remainder of the period. Senior forward John Ingham stifled a defensive clearance, leaving the game tied at the halftime whistle.

The Wolverines came out of the locker room hungry for a lead in the second half, finding the back of the net within the first two min­utes. Despite a series of Yeomen attacks headed by Ingham, soph­omore midfielder Jonah Blume-Kemkes and junior forward Sam Weiss, Grove City’s offense netted three more consecutive goals. Senior midfielder Louis Naiman thought the Wolverines caught the Yeomen off-guard, and that not every recorded shot by Grove City merited a tally on the scorecard. “We didn’t do a good job of ad­justing defensively to their attack and gave up some poor goals,” he said.

The Yeomen reflected Naiman’s frustration at the mid-game al­lowances. Not allowing their opponents any recovery time, Oberlin countered Grove City’s three-goal lead with their second goal in the 81st minute as sopho­more defender Jesse Lauritsen capitalized on a cross from junior forward Dan Lev. With fewer than three minutes left in the contest and a chip on its shoulder, the team overpowered the Wolverines’ defense again, with Naiman notching another shot past Grove City keeper Ben Weaver. Unfortunately, despite power­ful efforts late in the game, the squad ran out of time to even the score. “We did well to fight back from 4–1 down and gave ourselves an opportunity to tie the game with 30 seconds left,” Naiman said, ref­erencing a high shot by Ingham. “Unfortunately, we dug too big of a hole for ourselves.”

Head Men’s Soccer Coach Blake New substituted freely throughout the game, demonstrating his con­fidence in the breadth of talent on his roster. “We’ve now played at least five or six guys to cover for injuries,” he said. “We’ve put them in and they’ve been able to keep [our momentum] going, which probably wouldn’t have happened last year.” New also said that the upperclassmen-heavy team, boasting six seniors and six juniors, lends added experience and lead­ership on the field.

According to Naiman and Ingham, the Yeomen’s roster is not only stronger but also more cohesive and levelheaded. “We have a better mentality than we did in the past,” Ingham said. “We are levelheaded, especially emotionally. We have also been more unified since the be­ginning; that has helped us stay together and keep the correct mindset.” Naiman said that Wednesday after­noon’s results highlight the team’s focus on resiliency during preseason training. The loss does not dampen the team’s confidence in their improvement, nor does it overshadow the dynamic success the Yeomen have seen on their home turf recently. They commanded a dominat­ing shutout against the Waynesburg Yel­low Jackets 8–0 on Friday, Sept. 11 and secured an early lead against the Earlham College Quakers, leading to a 4–1 win, on Sunday.

Both wins were sparked from early offensive control from Oberlin. Ingham opened the scoring against both teams, capitalizing on a foul against the Yellow Jackets and sinking a penalty kick just over three minutes into the game, as well as finding the upper 90 of Quaker keeper Nicola Manni’s goal in the second minute of the Yeomen’s Sunday match. For the duration of both games, the Yeomen set an aggressive and fast-paced tone they did not allow their opponents to match, never once dropping their leads. Sophomore forward Timothy Williams also made significant offensive contribu­tions, adding three total goals to his re­cord: one on Friday and two on Sunday. The Yeomen now face the Medaille Col­lege Mavericks at home, slated for a 2 p.m. kickoff this Sunday, Sept. 20.