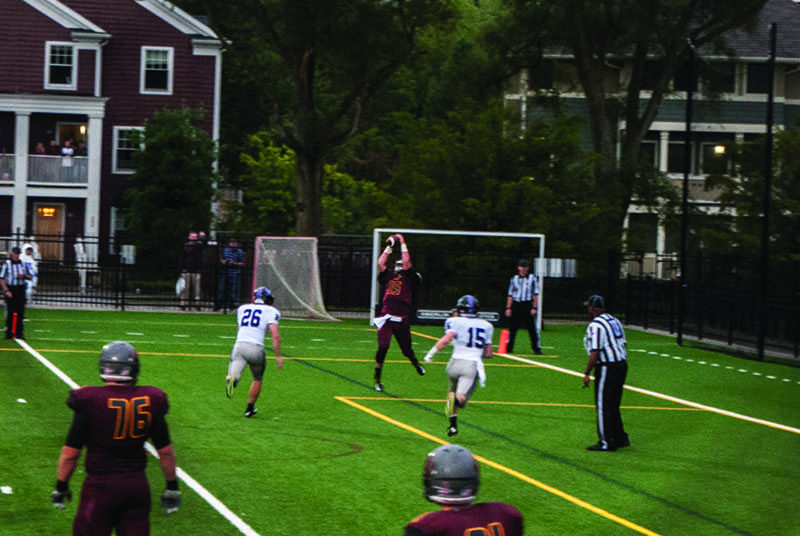 Thundering cheers erupted from the home stands, drowning out the referee’s final whistle dur­ing Oberlin’s 28–24 tri­umph over Kenyon College Saturday night. In defeat­ing the Lords, the Yeomen didn’t just secure their first win of the season — they made history. The match marked the first time the football pro­gram recorded a victory on the new Dick Bailey Field, completed only last year as part of the Aus­tin E. Knowlton Athletics Complex.

Backed by the efforts of senior running back Black Buckhannon, who rushed for a career-high 153 yards with one touchdown, the Yeomen advanced their re­cord to 1–1 overall and 1–0 in the North Coast Athletic Conference. The win also marked the second season in a row where Oberlin de­feated Kenyon. The constant rain and wind chill may have been the true opponents of both teams, as both passing of­fenses struggled. Senior quarterback Lucas Pog­giali completed seven of fifteen passes for 91 yards with one touchdown and one interception. Poggiali’s lone touch­down pass was a 32-yarder to junior wide receiver Justin Cruz, who made his second touchdown of the season.

Despite the weather, the Yeomen saw a large turnout of fans ready to steel themselves against the cold and damp. Head Coach Jay Anderson felt that the enthusiasm of Obie spectators sparked the team with added moti­vation against their rivals. “It was awesome to see so many people out there cheering for us,” Anderson said. “We definitely fed off of the energy.” Both teams’ offenses avoided aerial play due to the inclement weather. The result was more work for Buckhannon, who wove himself through the holes that Oberlin’s offensive line made in Kenyon’s defense. Buckhannon, who was named this week’s NCAC Offensive Player of the Week, attributed the Yeo­men’s success to the effort of their offense. “They were opening up lanes for me all night,” Buckhannon said. “They deserve just as much credit as I do.” Oberlin rushers were breaking down the Lord’s defense across the en­tire offensive line.

Senior running back Justin Wil­liams rushed eight times for 47 yards and running back Khalil Rivers ran for 36 yards on six attempts while also earning his first touchdown of the year. Poggiali also recorded 24 yards on the ground, and speedy sophomore quar­terback Christian Flynn ran for 12 yards. “It’s really just a matter of time before we are going to explode and show some people what this offense is really capable of,” Buck­hannon said. According to Coach An­derson, the rushing attack was the backbone of the offense and an important factor in dictating the tem­po of the game. “In order to be effective, you have to be able to run the rock and control the clock,” Anderson said.

The offense wasn’t the only bright spot for the victorious Yeomen — the defense also came up with many huge stops to stymie the Lords. Senior linebacker Jus­tin Bute had a career-high performance, recording 15 tackles and scoring a spot on the the d3football.com Team of the Week. Addi­tionally, sophomore defen­sive back Bennett Jackson had a tremendous game, checking in with 12 stops. The Oberlin secondary was reliable down the stretch as well, providing game-changing sparks for the team. Junior safety Larry Leggett and se­nior safety Tim Kondo each recorded eight tackles in the game. Kondo, a Union City, CA, native, praised the lev­el of play that the defense displayed on Saturday. “We came together as a team and overcame adversity,” Kondo said. “It was a great team win and great team effort.” The Yeomen’s next opponent will be the Deni­son University Big Red this Saturday night. The Big Red are currently 1–0 on the year and are coming off of a hard-won 38–24 victory against The College of Wooster.

Coach Anderson asserted that it will be imper­ative for the Yeomen to execute on both sides of the ball in order to beat their upcoming opponent. “We have to be able to stop their run and elimi­nate the explosive plays,” Anderson said. Oberlin has not defeated Denison since 2012 when they dominated the Big Red in front of their home crowd, 30–6. Kickoff in Granville, OH, is slated for 7 p.m. this Saturday.