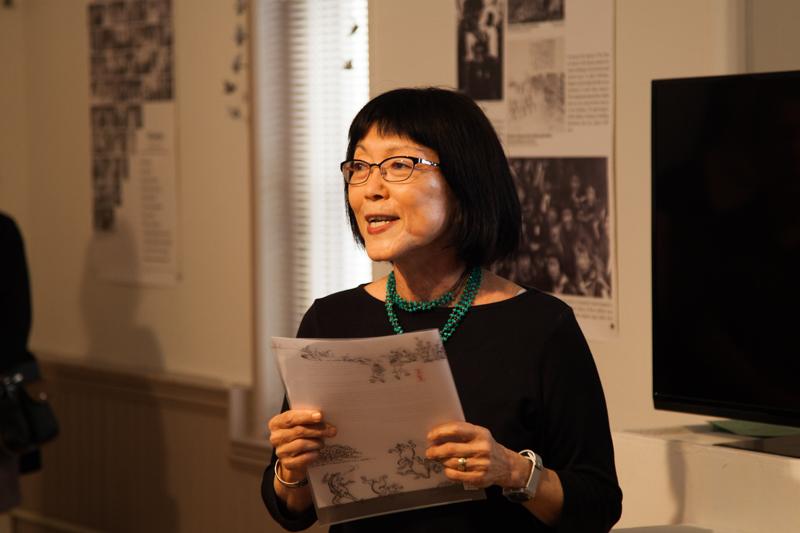 Creative Writing Professor Sylvia Watanabe speaks at the opening ceremony of Sadako: In the Spirit of Peace at the Firelands Association for the Visual Arts. Sylvia joined Green Legacy Hiroshima initative founder Tomoko Watanabe and others to help kick off the exhibit, which honors victims of the 1945 atomic bombing of Hiroshima.

70 years ago this month, a 2-year-old Japanese girl named Sadako Sasaki survived the atomic bombing of Hiroshima, which killed 80,000 people instantly and at least 70,000 more due to radiation poisoning within a year. She died of radiation-contracted leukemia 10 years after the 1945 bombing, but not before attempting to fold 1,000 origami paper cranes that represented her wish for peace and wellness. According to Japanese folklore, a crane will grant the wish of anyone who completes a senbazuru, or a thousand origami cranes.

Sadako’s legacy came to Oberlin with the Sept. 8 opening of Sadako: In the Spirit of Peace, a paper arts exhibit at Firelands Association for the Visual Arts. The exhibit features Sadako’s cranes, connected using a string that Oberlin community members forged, as well as posters from the Hiroshima Peace Memorial Museum in Japan, which not only commemorates the bombing but also advocates world peace in its aftermath. The exhibit will grow over the course of the next month as Oberlin community members donate poetry, visual art, origami and other contributions to the exhibition. It will remain open through Oct. 10.

In celebration of this exhibit’s opening, last week Oberlin hosted Tomoko Watanabe, a second-generation Hiroshima survivor and activist whose work relates closely to mission of Sadako’s story. Watanabe founded the Asian Network of Trust, an organization that works to foster an attitude of nonviolence and reconciliation in Hiroshima. She also co-founded the Green Legacy Hiroshima initiative, a joint project by the United Nations Institute for Training and Research and ANT-Hiroshima “established to safeguard and spread worldwide the seeds and saplings of Hiroshima’s A-bomb trees,” according to its website.

Watanabe brought five hibakujumoku — a Japanese term for trees that survived the atomic bombing 70 years ago — to Oberlin. These saplings will be planted in Tappan Square next year. “[Professor of Biology] Mike Moore, his colleagues in botany and the greenhouse manager Andy Burns are the ones who made hosting the trees possible,” said Professor of Japanese Ann Sherif, who met Watanabe in the summer of 2014 and played an important role in hosting her throughout her week in Oberlin. “Dennis Grieves, who works in grounds at the College, [was also helpful]. Watanabe-san nicknamed him ki no otoosan, or ‘the father of the trees.’”

A number of events related to Hiroshima remembrance and worldwide peace promotion occurred in Oberlin throughout the week, most of which involved Watanabe. To kick off the FAVA exhibit, Watanabe hosted a screening of Hiroshima no Pika, a surrealist animated film about the atomic bombing, at the Oberlin Public Library on Sept. 8. Later that day, she took part in the panel discussion, “70 Years Since Hiroshima,” at the First Church in Oberlin alongside Clifton Truman Daniel, the grandson of President Harry Truman, who ordered the atomic bomb to be dropped on Hiroshima. Watanabe also spoke with Oberlin High School students about the explosion and its aftermath and worked with them to create paper cranes. Local journalist Diane Roose, Creative Writing Professor Sylvia Watanabe and local ceramist Mari Kuroda all helped organize these events throughout the week, according to Sherif.

Sherif spoke to the warm reception Watanabe received from College and community members alike, as well as the political implications of Watanabe’s visit. “There’s a lot of tension among countries in East Asia now, so I felt hopeful about the cordial welcome and interest in Green Legacy from students at Oberlin, no matter where they came from,” she said. “People-to-people connections are powerful, especially when our governments are at odds.”

Sherif also incorporated lessons and assignments relating to Sadako’s story, Watanabe’s stay at Oberlin and the Hiroshima bombing in general in her classes to help raise awareness of the exhibit and associated events.

“We had not done any activities in Japanese class about that subject before,” said College sophomore Drew Hassenstein, who takes Intermediate Japanese I with Sherif and attended several events related to the

Sadako exhibit. “In fact, I’m pretty sure we hadn’t discussed the war or the bombing at all last year [in Elementary Japanese]. … We had to read and translate a number of packets about Watanabe-san as well as about the trees the first week of school. We also had to look at Japanese websites online about preserving the peace. … I saw the ceremony where Watanabe-san watered the tree with our Japanese class.”

Thanks to teachers incorporating the subject into their curricula, the FAVA exhibit and the hibakujumoku saplings Watanabe contributed, Sadako’s legacy is sure to remain a strong presence at Oberlin for the months to come.