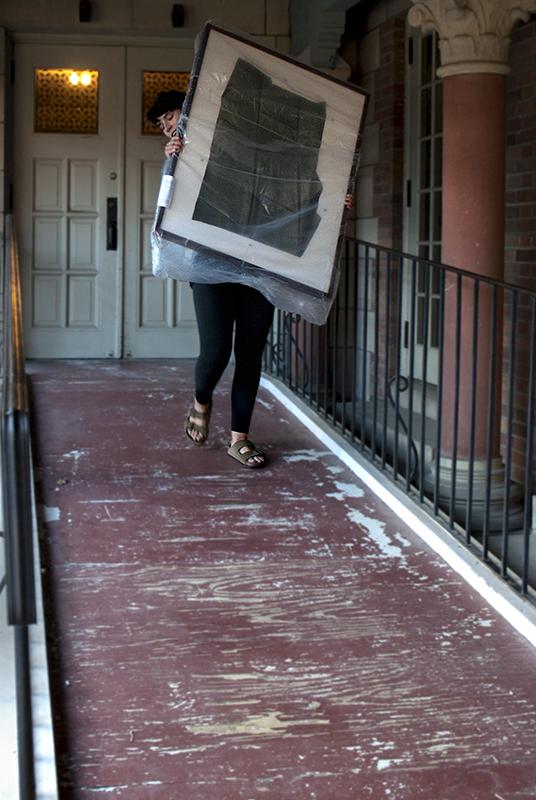 A student carries a piece of artwork out of the Allen Memorial Art Museum Saturday morning at the conclusion of Art Rental. Inclement weather and a new organization system resulted in a less chaotic event than in previous years.

At 5:50 p.m. last Friday, I made my way over to the Allen Memorial Art Museum in hopes of getting my hands on a priceless piece of art. The Art Rental program was set to begin at 8 a.m. the following day, and although I had heard murmurs of crazed art enthusiasts already arriving hours before, I figured I was relatively early. This naiveté, I soon discovered, is what separated the Art Rental veterans from imitators such as myself. I snagged an unimpressive 108th spot on the digital waiting list.

The program is an old, beloved and famous tradition at Oberlin, in which College and Conservatory students are allowed to take home works by artists like Renoir, Monet and Picasso for a $5 rental fee. The prominence of the collection prompts art buffs and curious first-years alike to set up camp in the museum’s courtyard sometimes a full 24 hours before the doors open.

Students have come to look forward to the event itself almost as much as seeing the art. In years past they have braved the cold night together in what resembles a sleepover, with campfire songs, chocolate milk and copious blankets.

More recently, however, Art Rental has gained the reputation of descending into chaos each year. Historically, students have decided the method of organization, resulting in disagreements about leadership. In 2012, the “line” deteriorated into an angry mob, with students jostling each other and arguing over their places. In 2014, a student grew dissatisfied with the “rules” and tore down the list of names of people in line to rent, sending the group into heated debate about whether or not to recreate it.

This year, trouble brewed early in the process. In a Facebook post at 1:35 p.m., College senior Madeleine Aquilina wrote, “The list has already been torn down for art rental! Wahoo!!” In a comment, one hopeful renter attributed the act to “entropy.” Another wrote “EAT THE LIST!” with gleeful sarcasm. Upperclassmen expected the chaos and, strangely, some seemed to revel in it.

This year the inclement weather was also bound to affect the event’s organization. “What will be interesting is the rain,” said Oidie Kuijpers, OC ’15. “It’s really wet already, and I can’t imagine what it will be like overnight. [It] might be a real feat of endurance to get those top pieces.” The courtyard was filled with fewer tents than in years past.

One of those tents was to be the home of College firstyears Jordan Joseph and Eli Roane. According to Joseph, the duo arrived on Friday at noon equipped with a tent and sleeping bags. He thought they were the first to arrive until 20 minutes later, when they heard that the list had already been removed. Some students had arrived as early as 7 a.m.

In a bold move, the two decided to create their own system. “We didn’t know about [the list] and didn’t have any prior knowledge about how the past Art Rentals had worked,” Joseph said. “But we thought the written list, where people just signed up, was pretty unfair to people who had been willing to miss class or miss commitments to camp out for Art Rental.”

The list, in Joseph’s eyes, had to be moved to the digital realm. “We started a new list, and we thought Google Docs would be the best way to do it,” Joseph said. “No one could tamper with it if we set the privacy settings so only we could edit it, and we could add people as they came. We shared it with everyone through their Oberlin email as they got added to the list.” The rules were as follows: Students were required to “check in” every two hours after 4 p.m. until 2 a.m., with another check-in at 7 a.m. the following day. Art renters were allowed to miss two of these check-ins, as well as have friends serve as proxies should they be unable to make it. Joseph and Roane did a simple roll call, and then students left for warmer and drier places.

A memorable check-in occurred at 10 p.m., when pouring rain forced students to huddle together along the edges of the courtyard. Students giggled at the absurdity of it all and tension remained minimal.

Most of the art renters arrived on time the next morning, many cold and groggy. “It actually worked really well,” Joseph said. “We had seniors and juniors come up to us and be like, ‘Yeah, it’s pretty demeaning that freshmen are running Art Rental, but you guys are doing a really good job, so we’re not going to complain.’”

Even experienced art renters conceded that, whether because of the new system or the weather, this year had gone better than others. “I thought the Google Doc was pretty well done and low stress. I liked that they shared people on it so that everything was transparent,” College senior Rebecca Orleans said. The Art Rental program started in 1940 under the direction of Ellen Johnson, art historian and Oberlin professor of 37 years. She began the program with only $600, a much smaller art collection and a hope that the program would educate students in a new way. “It would not only develop [students’] aesthetic sensibilities but might encourage ordered thinking and discrimination even in other areas of their lives,” Johnson wrote in her memoir, Fragments Recalled at Eighty.

Perhaps all the student body needed was a fresh perspective on why we have this program to begin with. While it’s nice to say you have a Matisse on your wall, Johnson wanted students to engage with the art, not the name.