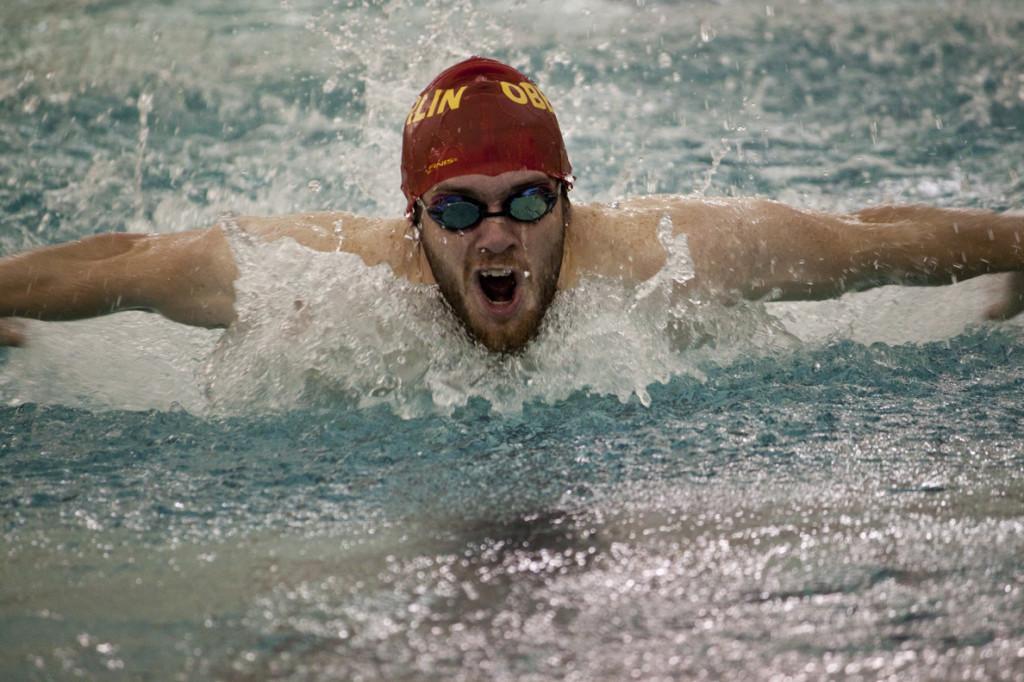 The swimming and diving team began its season impressively this past weekend with wins over the Hiram College Terriers and The College of Wooster Fighting Scots in the Greater Cleveland Swimming and Diving Tournament.

The team defeated the Terriers handily on Friday by a score of 347–106 and eked out a narrow 244–221 victory over the Fighting Scots on Saturday. The wins marked the first two for new Head Coach Andrew Brabson.

Strong results in both the men’s and women’s 200-yard medley relay helped Oberlin to victory against Hiram. Sophomores Olivia Degitz, Deirdre Haren and Lauren Choban and first-year Caroline Lesce swam the relay race in one minute, 57.21 seconds. They narrowly beat the next best relay team, also racing for the college, and gained 11 points for Oberlin in the process.

The team’s divers also contributed to two big wins. “The divers are the ones that put us over the top. They usually perform amazingly and gave us a nice padding of points,” said Harrison, who singled out first-year Shane Lonergan for his solid performance.

The fast start is hardly a surprise for those who know how hard the swimmers and divers work every week to hone their craft. The team practices twice a day four times a week, and an additional two other times during the week, making a total of 10 practices each week. Often, team members get up before 6 a.m. to start practice at 6:30 a.m. This grueling schedule was toughest at the beginning of the season, but the team has started to adjust as time has gone on.

“You start to get into a groove and not mind the lack of sleep so much,” said junior Jack Redell.

“We practice 19 hours a week. It’s a lot of practice,” said Redell. Still, he and his teammates are able to maintain a positive mindset, and know that all the work they put in pays off during meets. The team’s practice schedule is more rigorous this season under Brabson’s watch, and the results are easy to see.

Heading into the meets, the team’s expectations were high, since they know how much progress they’ve made since last season. “We swam a lot faster at this point than we did last year. The training has gotten a lot more intense,” said Review staff writer and sophomore Sarah Kahl.

This newfound intensity is largely thanks to Brabson. “Our new coach has brought a relaxed but motivated energy. Practices are more fun and interesting, but we’re still working harder,” said Redell. Kahl also noted that he “has more of a plan” for the team than former coach Mark Fino.

The team’s depth will also be an asset this season. “Our new incoming class has allowed us to have someone for every event. A lot of teams lack that. We have a lot of people who can swim a good 200 yard race,” said Kahl. First-year sprinters Nils Gudbranson and Adam Winikoff both swam well for the men’s team on Friday and Saturday and look like they’ll be assets this season.

Brabson was pleased with the team’s victory but knows team members can’t rest on their laurels. “Everyone has some facet of their race or performance that can be fine-tuned in practice,” he said.

The team will look to build on its fast start to the season when they go on the road to battle with the Case Western Reserve University Spartans on Saturday.