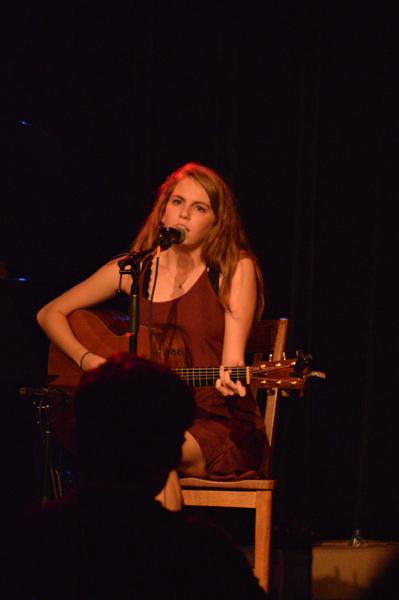 College sophomore Lilah Drafts-Johnson cradled her guitar as she prepared to perform for an audience at the Cat in the Cream last Friday. Before singing, she told the crowd she’d be performing her favorite original song, but that it was unlike many of her other pieces, which share similarities with Taylor Swift’s nostalgic love songs. Draft-Johnson’s song “Compliment” addressed the problem of street harassment, including lyrics like “With your legs you know you look fine,” and “Didn’t anyone ever teach you how to smile?” While much of the song is sung from the perspective of street harassers, she expertly delivered the words with an ironic and mocking tone. Drafts-Johnson explained that inspiration for the song came from personal experience. “When I came back to my hometown, which is just outside of Boston — it’s a suburb called Melrose — I started running again there, and I was just totally shocked about just how much general street harassment would go on,” she said. “I had one particularly scary incident and ended up writing an editorial about it in the paper, but that didn’t do it as a therapeutic thing for me. So that’s how that song came about — just a lot of frustration from a lot of years of running.”

Drafts-Johnson performed “Compliment” as part of a songwriting showcase organized by College junior Brendan Eprile, or “Thabo,” as he likes to be known onstage. Eprile invited singer-songwriter friends to play onstage with him. Much of the group that performed during Friday’s showcase are involved with Oberlin Songwriters, an organization started last year by College juniors Kristin McFadden and Rob Jamner. “I noticed when I got [to Oberlin] that there [were] a lot of songwriters on campus, and they’d be playing at the Cat open mics or other talent show performances,” McFadden said. “I was super impressed and also a little frustrated that there were so many songwriters and there was no way to bring us all together, that we’d just listen to people’s songs and not give feedback.” Jamner added that before he and McFadden founded Oberlin Songwriters, there weren’t a lot of resources for songwriters to utilize in Oberlin. “There’s not enough support for singer-songwriters here, at least at an institutional level,” he said. “There’s not classes offered in it as much — there wasn’t, before Oberlin Songwriters, an organization dedicated to it, and [there aren’t] as many venues [ for songwriters to perform]. Becoming more involved in building a community helped me with my own [songwriting] as well — just starting things, meeting people and starting to pursue songwriting a lot more seriously.”

The organization holds workshops during which songwriters bring their compositions and give and receive feedback from one another. In addition, McFadden led a workshop last year specifically for women and trans songwriters to increase accessibility to the organization’s resources. Members of Oberlin Songwriters also hold resource sessions on how to copyright songs and how to write in specific genres.

The organization sponsored a songwriters’ showcase at the Slow Train Cafe last year, which featured 19 people playing original music. “We fit it into two hours, which was pretty amazing,” Jamner said. “Each person had one song and it was kind of hectic, but it was really fun. It’s something that, in the first year of operating, we were pretty proud of.” This semester, the organization became officially chartered, providing members with more resources. McFadden and Jamner hope that these resources can be used to bring in professional songwriters to give workshops, talks and performances.

Jamner and Eprile also decided to teach a songwriting ExCo for the first time this semester. “It’s a workshop-style class, and we’re trying to go through as many different parts of songwriting and also really build a community,” Eprile said. “We’re learning from our students, too.” The ExCo aims to broaden the songwriting community and allow students to get involved at any level they feel comfortable. These new opportunities to connect with other songwriters in Oberlin may explain the many songwriter performances at the Cat over the past two weeks.

Besides Eprile’s showcase on Friday, McFadden, along with College junior Eleanor Van Buren, performed on Sunday, Sept. 20. “Kristin and I performed together at the Oberlin Songwriters Spring Showcase last May, and we kind of stayed in touch over the summer about what songs we’re working on and what direction we wanted to take and our own ambitions,” Van Buren said. McFadden elaborated on her respect for Van Buren and her songs. “We both volunteered to MC the showcase … We were joking around with each other, probably not doing a very good job. I had never heard any of her songs before, and I was really blown away. I insisted that she record this song in some capacity, so that I could listen to it.”

Fittingly, Van Buren opened the show at the Cat with the song that that had enamored McFadden. Van Buren, whose songs often focus on relationships, ended the song with the clever line, “I’m just a watered down version of what it means to be a virgin.” McFadden’s music complimented Van Buren’s songs well, as they both drew on themes of love and heartbreak.

College senior and songwriter Colin Seikel, who uses the stage name The Conductor, also spoke about relationships between people in his song “Superhuman,” which he performed during Friday night’s showcase. He dedicated the song to “all the people in your life that are good to you.”  Last Wednesday at the Cat, Seikel performed songs from Blastoff, his upcoming album that will be released this semester.  OSlam poet and College senior B.J. Tindal joined him in the performance.

Additionally, Jamner will be performing Saturday, Sept. 26 at the Cat to celebrate the release of his new five-song EP, Lost in the Clouds. College junior Maddie Batzli will be joining him. “Rob and I met freshman year just [through] mutual friends unrelated to songwriting,” Batzli said. “We’ve played together a tiny tiny bit last year, but basically just at the beginning of this year, a couple weeks ago, he just said that he was planning on playing a show at the Cat to showcase his EP, and he asked me if I wanted to open for him. Then he gave me half the set, which was really nice. I’m really excited to hear him play his stuff.”

While the songwriting community has grown and become more connected, McFadden said she still hopes that more resources can be created for songwriters in Oberlin in the future. “I wish there was more of a performance major for more pop singer-songwriter people,” she said. “I think that that would be definitely utilized here, but I don’t really know how it would fit into the system that’s already in place. I think that’s always a struggle, making songwriting a respected art form.” On a more positive note, Van Buren said, “It was funny because I was having a conversation with a voice major in the Conservatory the other day, and she was like, ‘Oh, I didn’t know you’re a songwriter, that’s so brave.’ It’s really funny because she’s a singer; she does music all the time, she performs, but there’s something about songwriting, about sharing your own personal music that’s way different than being a singer or being a voice major that sings others’ work.”

To share personal stories in public spaces takes courage and guts, but there are many students at Oberlin who are up to the challenge, and who are working to find ways to support each other in the process.