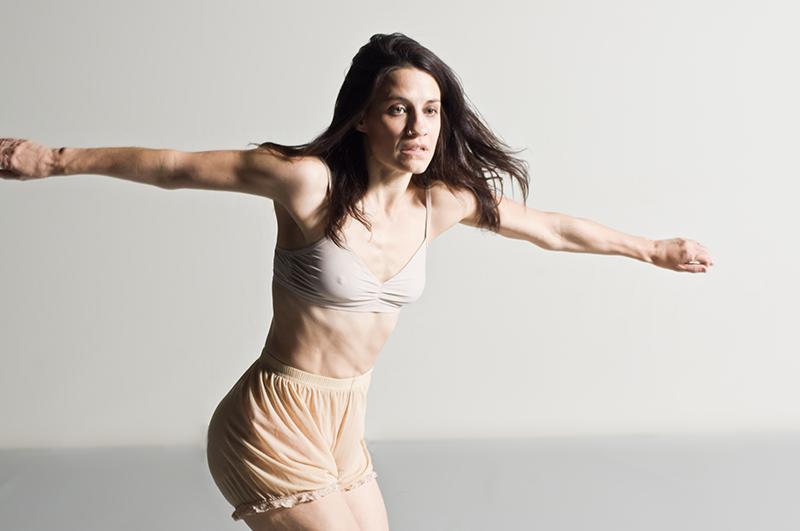 Associate Professor of Dance Alysia Ramos extends her arms while twisting her body. Ramos was hired this semester as a tenure-track professor and hopes to bridge the gap between Euro centric dance and dance traditions from African, Asian and Latin American cultures.

The creaky floorboards of Warner Center’s first-floor hallway rarely respond to the fresh footsteps of a new Dance professor on their way to inhabit a vacated desk. But this year, Dance Department Chair Ann Cooper Albright welcomed Associate Dance Professor Alysia Ramos as a new addition to the department.

“[Ramos’s arrival marks] the beginning of a new generation of dance faculty in the tenure track line,” Albright said.

Ramos was hired for the first tenure track position available in the department since Albright was hired in 1990. The Dance department has a low budget compared to other departments, so there are only three tenure spots available. Oberlin’s Theater and Dance faculty occasionally hires a temporary visiting professor or a postdoctoral fellow to fill spaces left by professors on sabbatical or to allow a recent Ph.D. recipient to share their particular research interests while gaining teaching experience. Yet rarely does the department shift enough to appoint a new artist to a potentially permanent teaching position.

The retirement of Professor of Dance Elesa Rosasco last year opened up the opportunity for both students and faculty to critically assess the Dance department’s current curricular strengths and shortfalls. They recognized a need for an instructor who specializes in “contemporary global dance with a focus on transnational, intercultural and hybrid movement practices,” as articulated in an online job posting for the position. This request reflects the divide in the department between students and faculty practicing non-Eurocentric genres — through classes such as Capoeira Angola, West African Dance Forms in the Diaspora and Essence Dance Class — and those engaged with movement styles derived from a Eurocentric classical tradition, such as ballet or modern dance. According to Albright, out of four potential candidates the department brought to campus last year, Ramos was the unanimous first choice, given her experience in a number of different traditions, her strong teaching skills and noteworthy portfolio.

Victoria Fortuna, a Mellon postdoctoral fellow and visiting assistant professor at Oberlin, taught theoretical courses on political performance, contemporary global dance, Latin American history of dance and performance ethnography from fall 2013 to spring 2015. Her two-year contract and traditionally academic courses gave the department a taste of what it needed: a long-term dance instructor and choreographer with a transnational movement repertoire who could bridge the gap between students and dancers working from a European foundation and those influenced by movement vocabularies “connected to Asian, African and Latin American countries and their diasporas,” according to the job description.

“I saw the job posting, and I thought, ‘Wow, it really looks like it’s been written from my resume,’” Ramos said. The choreographer and dancer discovered a love for her craft at the age of three and studied movement throughout her childhood and adolescence before moving to New York after high school. There and abroad, she danced with companies such as Gabri Christa’s Danzaisa, nathan trice/RITUALS and Niles Ford’s Urban Dance Collective. Additionally, she performed with Kotchegna, a dance and drumming collective from the Ivory Coast, Sing Sing Rhythms from Dakar, Senegal and her own group, Mezclado Movement Group. Ramos apprenticed with Danza Contemporánea and DanzAbierta in Cuba and has done research and performance in Senegal, Suriname and throughout the Caribbean. With exposure to such a wide range of genres, it is no surprise that when it comes to choreography, Ramos says she is passionate about pieces that connect diverse elements to create full performances. “[I am] interested in eclectic vocabulary that makes each piece seem like its own world — kind of like collage or pastiche,” she said.

Although Ramos has focused on African and Latin American genres throughout her career, she says she is now more interested in creating movement that speaks to the environment and state of mind she’s in at the moment. In Cuba, Ramos was exposed to the codified Cuban national dance form, a fusion of corporeal languages from Martha Grahambased modern techniques to social dances like Rhumba and Salsa, and Afro-Cuban traditions — a mezcla that reflects the country’s “transculturación blanquinegra,” or black and white transculturation. She completed a bachelor’s degree in anthropology and African diaspora studies at Hunter College and spent several more years in New York performing before leaving to complete an master’s of fine arts in dance at the University of Utah. As she began choreographing and honing her own style, Ramos allowed her involvement with various companies and genres to influence conceptual work such as the relationship between spirituality and dance. “[I’m interested in exploring] what it is about dance that connects people to their spiritual selves and what it is about it that takes you out of this world,” she said.

Ramos has been attending Assistant Professor of Theater Justin Emeka’s Capoeira Angola class as a participating student. Emeka says that her presence in the class indicates her commitment to dance approaches couched in the African diaspora. Ramos says she hopes to inspire greater confidence in dance students at Oberlin, especially within upper-level courses. “It seems like people are sort of hesitant to call themselves dancers, and they kind of dabble, and I’d like it to be a little more strongly identified,” she said. Teaching Contemporary II and III back to back, Ramos is working to clearly iron out the differences between the levels and characterize each class in terms of skill sets. She is focused on refining technique and expanding movement tools in II, while personal style development is a central facet of level III.

She is especially excited to facilitate a Winter Term project with her friend Nathan Trice, whose work “examines contemporary and historical dynamics of gender, identity and culture through a unique interdisciplinary multimedia expressive language,” as stated on his company’s website. For the second two weeks of Winter Term, the pair will offer an optional contemporary technique class using vocal work in the morning and an afternoon workshop utilizing a technique called conducted improvisation, which was developed by a jazz conductor and involves creating work in the moment based on a common vocabulary of gestures. She emphasized that students need neither a particular background to participate and perform, nor do they need to take courses in contemporary technique. The work that happens during Winter Term will feed into the Oberlin Dance Company show Ramos will choreograph in the spring. “It’s going to be a very collaborative choreographic process. … It’ll come out of improvisation, and then we’ll shape and shape and shape it….based on what people bring,”she said. “So if they’re coming with hip-hop and circus, it’s going to look very different than if we get everyone coming from the same department, the same training.”

Maya Muenzer, College senior and Dance and Biology major in Professor Ramos’ Contemporary III class, says the techniques learned in the class are fresh and new. “The movements that she’s asking us to familiarize our bodies with are different than other contemporary movements that we’ve done before; they definitely have a more world culture [foundation],” she said. Students work more with the thoracic and cervical spine than lumbar spine, she says, as well as focusing on strength through circuits of movement, key words to elicit movement based on natural phenomena like melting or freezing and working on combinations. “I can feel myself feeling more comfortable with the movements and not being embarrassed about how I look while I do them and really going for the intention that she’s asking us for,” Muenzer said. “You can tell by watching her move that she has this great technique base in ballet and contemporary and other styles, but she is applying it to other things. So for a lot of us — because we only have experience in very Western dance — she is opening that bridge.”