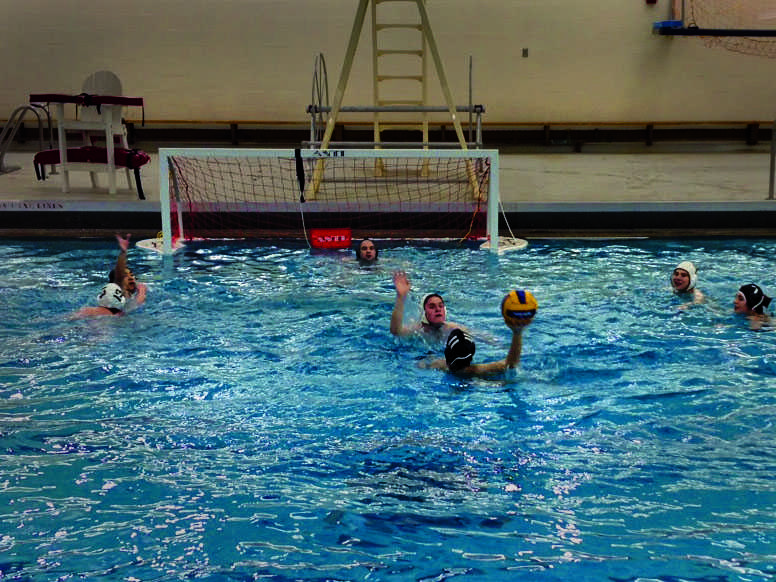 The water polo team gets in an offseason practice session. The water polo season begins in the spring; the Yeomen and Yeowomen hope to once again be competing in the Ohio Valley Division of the Club Level bracket within the CWPA.

If one were to google “Oberlin College Water Polo,” a website would appear that some Ober­lin students may not know had ever existed. The page, proudly sporting a copyright from 2005 at the bottom, represents a relic of the former glory of the Yeomen and Yeowomen’s water polo program.

“There was a time in Oberlin’s history where we hosted Club Water Polo Nationals. … And then, for some reason that we still can’t figure out, the team just started to fall apart,” said ju­nior Tadhg Young, a captain of the up-and-com­ing club water polo team this year, alongside ju­nior captain Victor Lau. They want to bring back the glory their team once held at Oberlin. To do that, they are willing to work their way from the bottom up.

Young and Lau were central in initiating wa­ter polo’s resurgence two years ago, with Lau as captain and Young as treasurer. They encoun­tered difficulties early on when one of the team’s two captains left the school, but Young says the small team’s resolve remained strong.

“Luckily we still had Victor, and we still had a lot of interest in the group, and so we decided that we were just going to go ahead with it,” he said.

Progress was slow, but the wheels really started turning for the team in the 2014-2015 school year.

“The team started getting our budget togeth­er, started actually having water polo represen­tation at club sports, and we really reached out and had our first booth down at the club sports fair,” Young said.

The tradition of the energetic bunch show­ing up to the club sports fair clad in Speedos and confidence started at the fair last year; the team tried to gain as much attention and notability as possible right off the bat.

The team did gain the attention of members of the Oberlin varsity swim team, which Young and Lau claim have critically bolstered the team’s roster during the swim team’s off-season.

Experienced swimmers weren’t the only ad­ditions to the team’s small roster, though, as the now-captains cited many recruits as being total newcomers to the sport but very excited to learn.

“That has been our favorite part of practice — the enthusiasm of new players,” Young said. “That’s what club sports is about: being able to try things in a low-stress environment and not feeling like you’re floundering in any way.”

Sophomore Lukas Gnirke was one of these eager beginners last year, joining with more ex­perience in swimming than water polo.

“I swam in high school, and I had played a lit­tle bit of water polo, only by fooling around with the ball on my swim team,” he said.

Last year, the team practiced once a week with a roster of eight to nine players. This year they are trying to create a more competitive en­vironment with biweekly practices in hopes of entering into tournaments.

However, the team’s fall season is the less competitive of the two, as it is reserved for train­ing novice members. The swim team is in its competitive season and is unable to lend sup­port to water polo’s roster.

“We definitely put a backburner on fall sea­son, so that in spring season we can be a bit more competitive — we get our swimmers back, and we can hold more in-depth practices, focusing on strategy more than fundamentals,” Young said. This year, Young and Lau are teaching sev­en new players.

The captains are continuously trying to in­crease the team’s size and accessibility, ensuring that they’re approachable to new players and encouraging friends to spread news about the team’s activities through word of mouth. They said that they also plan on making posters and throwing some water polo parties, similar to other parties thrown by varsity and more estab­lished club teams.

Young and Lau’s welcoming personalities and fun practices are what attracted Gnirke in the first place.

“It’s really fun, the people on [the team] are super cool, and it’s a great workout,” he said.

Despite publicity efforts, the team is still encountering issues with a lack of familiarity concerning what exactly goes on during a water polo match. The sport is not particularly popu­lar inthe U.S. in comparison with staple sports such as soccer or football, and it requires a pool, which is not as readily available an environment as a field.

Pool availability presents another problem, especially in the spring of 2015, as the Carr Pool will be renovated and therefore unavailable to everyone. The team has consulted Director of Recreation and Club Sports Betsy Bruce about the possibility of going to other facilities or rec­reational centers.

“The expense of that might be intense, but a dream is a dream,” Young said.

Since the beginning, the captains have con­tinued to recruit members and raise awareness for the team. When it comes down to it, that seems to be a shared experience among club sports.

“We just want people, we just want bodies, we just want interest and enthusiasm for our club,” Young said, continuing that a dream of theirs is returning to Oberlin after graduating and seeing a full-fledged and healthy water polo program, much like the club’s 2005 glory days.