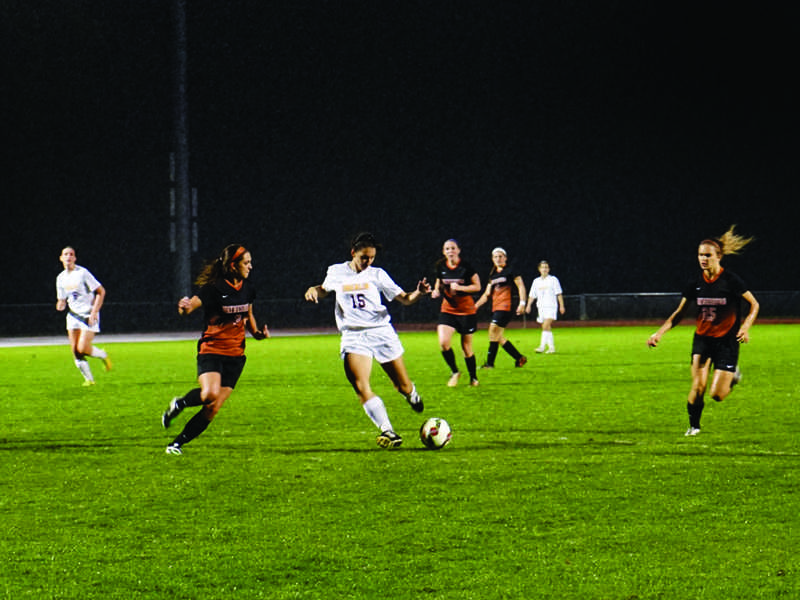 Junior forward Taylor French takes aim on goal against the visiting Waynesburg University Yellow Jackets. French notched her third goal of the season this past Wednesday against the Muskies of Muskingum University. The Yeowomen are currently 5–2–1 overall and will travel to DePauw University Saturday for their first Conference game of the season.

Many individuals con­sidered women’s soccer’s historical nine-game win­ning streak last season to be the high point in the history of the program at Oberlin. This year, the Yeo­women have quickly prov­en that last season’s magic wasn’t merely an anomaly.

The Yeowomen capped their third, fourth and fifth consecutive victories in the last week, including an 8–0 dismantling of Marietta College, a close 2–1 victory over Heidelberg University and a solid 4–2 win over Muskingum University.

Against Marietta Col­lege last Friday, the Yeo­women had five different players find the back of the net, highlighted by a hat trick from junior mid­fielder and Review News Editor Tyler Sloan. The Yeowomen destroyed the Pioneers in all facets of the game, demonstrated by Oberlin’s 30 shots in com­parison to just two shots from Marietta. Sloan cred­ited the entire team for what she called a complete Yeowomen effort.

“The defense was really composed and allowed us to move the ball up the wings for consistently dangerous service into the box,” she said. “The central players also did a great job of changing the point of attack to open up space in the final third for scor­ing opportunities. It was a prime example of what we can do when we ex­ecute what we practice in a game.”

The Sunday contest would prove to be a much more difficult task for the Yeowomen. Going up against a fierce Heidelberg squad tested Oberlin’s re­silience, as an early goal in the third minute from Hei­delberg would provide the Yeowomen with an uphill battle.

Oberlin never stopped fighting and was able to steadily gain momentum as the game continued. In the 67th minute, sopho­more forward Gwennie Gardiner broke through the Heidelberg defense, ty­ing the game at 1–1.

Oberlin continued to outplay and apply pressure to Heidelberg throughout the second half. Regard­less, the game remained tied until sophomore mid­fielder Caitlin McCuskey broke the deadlock in the 87th minute, sending a cross from sophomore midfielder Hannah Cook into the back of the net.

“We started the game on Sunday a little bit slow, [but] as the game went on, we settled in and were able to gain momentum,” she said. “We controlled most of the second half and didn’t let up the pressure, ultimately allowing us to finish out with a win.”

In Wednesday’s con­test against Muskingum, the Yeowomen used three first-half scores to build an early lead. Oberlin used accurate shooting — seven shots on goal out of 12 total — combined with stonewall defense to pre­vent Muskingum from pos­ing much of a threat.

The win against Musk­ingum now leaves the Yeowomen with a 5–2–1 record. After starting the season 0–2–1, it’s safe to say the team has picked a good time to find its stride with Sat­urday’s conference opener against De­pauw University looming.

Head Coach Dan Palmer said the team’s weaker competition lately does not detract from the accomplishment of their victories, or their improved of­fensive strategy.

“We have been playing well all sea­son, and we played better teams at the beginning of the year, which is re­flected in the earlier results,” Palmer said. “With that said, we have steadily improved on the offensive side of the ball, which also has contributed to our results.”

The Yeowomen know that they need to continue to improve as the most critical period of the season quickly approaches. Sophomore Caitlin Mc­Cuskey is convinced that the team will continue to make the strides necessary for success in conference play.

“I think the improvement will con­tinue throughout the season,” McCus­key said. “Our speed of play, our an­ticipation when it comes to seeing the field, as well as our team unity on and off the field is continuing to grow as we progress through the season.”

The Yeowomen will travel to Green­castle, IN, this Saturday to face the De­Pauw University Tigers. Kickoff for the game is scheduled for noon.