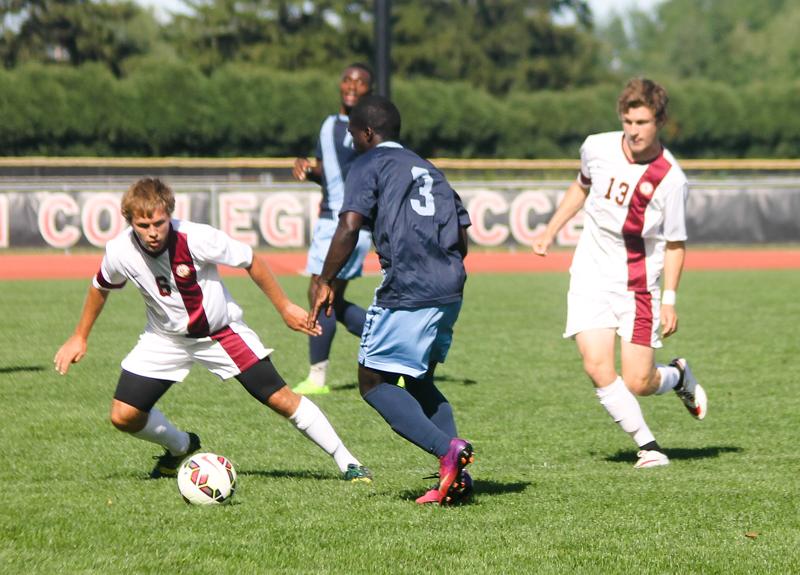 Senior defender Macallan Savett lunges at Medaille College’s Prince SaySay. The Yeomen defeated the Mavericks 6–1 on Sunday, Sept. 20 but fell to the DePauw University Tigers to the tune of 2–1 this past Saturday. The Yeomen are currently 6–3 overall and 0–1 in the North Coast Athletic Conference.

The men’s soccer team suffered its first loss this season in the North Coast Athletic Conference on Saturday, falling to the DePauw University Tigers 2–1.

DePauw came out of the gate firing on all cylinders. Just 27 seconds into the game, senior forward Adrian Ables scored a goal, giving the Tigers an early 1–0 lead.

Going into NCAC play, the Yeomen had a record of 6–2, and they fully understood the challenge that the 6–1 Tigers would pose on their home field. According to Head Coach Blake New, controlling the pace of the match would be an important factor in the outcome of the match.

“They play a really unorthodox style; they play man to man all over the field,” New said. “They play with two marking backs on a sweeper, and they’re a very physical team, so you have to try and instill your tempo on the game. You have to be patient, and you have to move the ball.”

Despite the early goal, the Yeomen kept a tight ship for the rest of the first half. The pace of play picked up after the Yeomen came back from the intermission significantly more aggressive. Oberlin fired off eight shots in the second half — double what they shot in the first.

On the defensive end of the pitch, first-year keeper Koryn Kraemer deterred six shots in the contest out of eight attempts on goal. In comparison, DePauw’s senior keeper Chris Yount finished the game with four saves.

The Yeomen found their mark in the 66th minute, earning their first and only goal in the match when senior midfielder Louis Naiman notched his third goal of the season. However, the Tigers quickly retaliated in the 75th minute, when Julian Gonzalez found the back of the net to put DePauw up 2–1, securing them an early three points in NCAC play. Overall, DePauw finished the game with 21 total shots, eight of which were on goal.

Despite the loss, the Yeomen remain confident in their prospects for the remainder of the season. First-year midfielder Wyeth Carpenter stressed that despite the tough loss, the Yeomen will continue to raise their intensity and competiveness for the rest of their conference matches. “This will give more fuel for the team in the coming days to work hard and compete at a high level,” Carpenter said.

Naiman expressed similar optimism, both for the rest of the season and the team’s NCAC expectations.

“We understand that we have a lot of work ahead of us if we’re going to achieve our goals for the season,” Naiman said. “How we compete against our conference opponents will ultimately determine whether we succeed. We have a tough schedule ahead of us, but we expect to win every game.”

The loss puts the Yeomen at 6–3 on the season and 0–1 in the NCAC. Oberlin looks to rebound this Saturday as they travel to The College of Wooster to take on the Fighting Scots at 7:30 p.m.