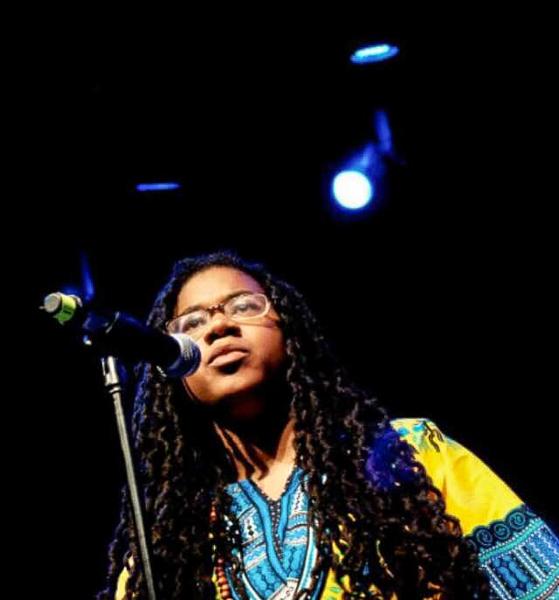 Davis is a Creative Writing and African-American Studies major at Temple University, and her work has been featured at the San Francisco Opera House, The Kimmel Center, The Temple Performing Arts Center and on CNN. Additionally, the young poet was crowned the National Brave New Voices Grand Slam Champion in 2011 and ranked second in the nation at the Youth Speaks Poetry Slam in 2012.

Every year, OSlam dedicates part of their budget to bringing poets of color to Oberlin. The team first crossed paths with Davis at the College Unions Poetry Slam Invitational, an international slam competition between colleges and universities around the world. Davis represented Temple University’s Babel Poetry Collective, for which she is the artistic director.  The chair members of OSlam were particularly moved by the way Davis confronted issues of race, gender and sexuality. “The work of Black and Brown artists is often ignored, exotified or belittled,” said College junior and OSlam Co-president Annika Hansteen Izora said. “Both myself and my co-president, Nina Austin, as Black women, are striving this year through OSlam to uplift the stories and art of Black and Brown artists, and we thought that Kai’s work on her identity as a Black, queer woman is incredible.”

Last year, Oberlin welcomed awardwinning slam poetry duo Sister Outsider. The stunning performance moved OSlam to continue to work toward bringing more artists of color to campus. Davis ultimately appeared on a list of favorite performers. “The chair members of OSlam discussed which of our favorite performers we wanted to prioritize and reach out to, and she was one of the first to respond,” said College senior B.J. Tindal. “She was absolutely willing to work with us in order to make it happen and generally showed a genuine interest in working with us.”

Davis is not an artist who is afraid to pull any punches. In her piece “Fuck I Look Like,” she exposes her experiences with racism in academia and challenges the way it positions scholars of color beneath a default group of white intellectuals. “Apparently Maya Angelou is inferior due to her grammatical errors,” she writes. “But white man Mark Twain can write a whole novel in nothing but grammatical errors and that shit is a literary masterpiece.”

Also a Philadelphia native, Tindal had seen Davis perform this piece before CUPSI. Davis was a member of the Philly Youth Poetry Movement, and she competed in the first poetry slam Tindal ever attended. She performed “Fuck I Look Like” and won the night easily. “I instantly fell in love,” Tindal said. “Her poetry has always been powerful in a unique way that inspires the audience while also holding each person accountable.”

Activist art is nothing new at Oberlin, and Davis is sure to be in good company. She will perform at the Cat in the Cream at 8 p.m. Saturday, and OSlam will also be hosting a workshop at 3 p.m. in Afrikan Heritage House, where Davis and campus poets will mingle and write. “We hope that at both Kai’s workshop and performance, Black artists across campus will see their stories illuminated,” Izora said. “The spirit that was brought at Sister Outsider was incredible, and we hope to share that same energy again with the campus.”