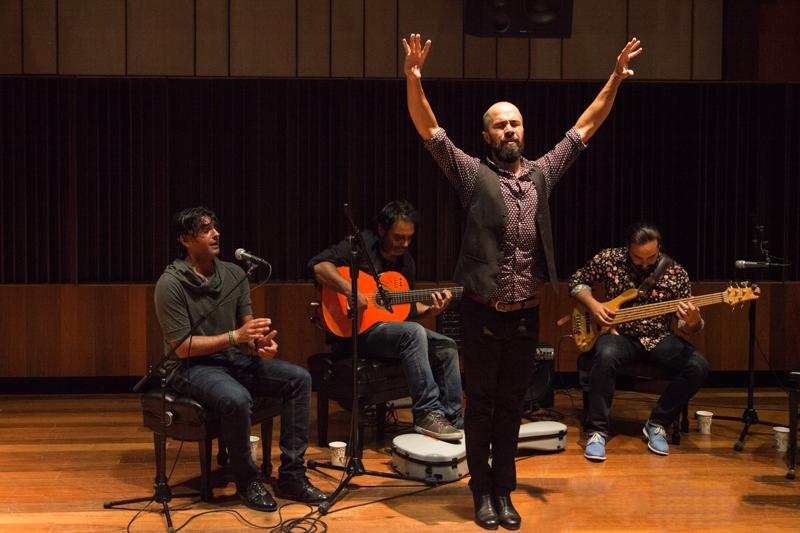 An eager stream of students and faculty poured into Clonick Hall in the Kohl Building last Sunday evening. Those anticipating the crowd arrived well before 6 p.m. Anyone who came on time or late squeezed into the intimate hall’s corners and onto the floor to catch an earful and a glimpse of a world-renowned contemporary flamenco troupe. Nino de los Reyes is recognized internationally for his innovative dance style, which combines traditional flamenco and other modern and jazz elements. He performed with three talented musicians: bass guitarist Alain Perez, acoustic guitarist Juan Escobar and vocalist Ismael Fernandez. The four came to Oberlin for a three-day residency as part of Oberlin’s Performance and Improvisation Program. PI provides forums and collaborative opportunities for Conservatory students to help bridge the gap between the Jazz and Classical departments, and to increase exposure to diverse genres and improvisation techniques. The room was host to an interdisciplinary gathering of spectators, as several Hispanic Studies and Dance professors alike recommended that their students attend the performance.

The ensemble occupied an informal, humble presence onstage as Nino de los Reyes introduced his collaborators. Escobar, born in Madrid to a family with Romani heritage, led the first piece with the rhythmic lulls and harmonic structure that underlie the flamenco style. Perez, who comes from a Cuban family of singers and dancers, then eased into the mix with a light, soulful, harmonic line, inviting the dancer to begin a stomp from the sidelines.

The son of Ramón de los Reyes, an internationally known flamenco dancer and professor based in Madrid and New England edged his way toward the semi-circle of musicians, drawing his hands together while his heels increased their speed of accented tapping. Keeping his spine erect, de los Reyes filled his shoulders with deep breaths and released them while snapping his fingers. Fernandez grew up performing in Seville with his family’s famous flamenco band. Within the band, he incorporated elements of the traditional Andalucian style cante jondo, which means “deep song,” into his gorgeous vocal phrases evocative of a cantorial chant. Fernandez rose in pitch with progressively louder chants of the Spanish lyrics. In one song, he ended his phrases with an “ao” vowel sound as part of a regional accent and sank into guttural exhales. The Romani style, which includes North African and Indian elements, was evident in his voice, along with Islamic and Jewish harmonic lines derived from the culturally rich region of southern Spain.

As the Spanish poet Federico García Lorca once wrote, “In all of Andalucia … the people talk constantly of duende, and they recognize it as soon as it appears out of a powerful instinct.” Duende is the term used to describe the quality that musicians or dancers — especially in flamenco — express with a certain soulful honesty and passion that can’t be learned but rather is intuited. Lorca would have been pleased; Niño de los Reyes and his band most certainly possessed duende, as they traversed centuries of Latin and Mediterranean sounds with an anguished yet celebratory gusto.

With all performers contributing to the sound, the band began to play as one pulsing body, as if an electric current were running through their clapping hands and instruments. Their influences ranged from AfroCuban beats and bass lines to contemporary jazz chord progressions and tap dance styles, all layered upon a traditional flamenco musical and movement base. “We grab things from everywhere; we try to improvise a lot,” de los Reyes said in his introduction to the concert. One band member mentioned at a subsequent question and answer session that the world of flamenco is changing a great deal, and to stand out one must have a current vision and personality and be able to incorporate traditional elements. The group demonstrated its skill in this regard with a rendition of the jazz standard “Autumn Leaves” by Joseph Kosma, interpreted seamlessly using their Flamenco vocabulary.

The dancer’s cycles of movement reflected the band’s musical adventurousness. He demonstrated a sense of floating motion as he reached upward with his arms and torso. However, the dance always pulled his energy close to his seemingly magnetic core, often spinning around on an axis that leaned side to side as he threw his weight from one leg to another. He launched into high-speed jumping and spinning with incredible footwork, all within the steady rhythmic pattern underlying each song, before condensing his movements carefully into quiet, subdued clapping. “There’s one thing that’s universal, and that’s rhythm,” Escobar said after the show.

Band and dancer cultivated a symbiotic relationship through eye contact and careful mutual attention to slight harmonic shifts and rhythmic fluxes. The performers often launched into extended crescendos and channeled quiet composure in unison, reflecting their ability to improvise collectively and produce a coherent sound. De los Reyes casually went backstage halfway through to change his shirt, returning shortly after to encourage his compañeros by shouting “Olé!” from the sidelines when each musician launched into a solo.

A particular highlight of the performance was when Perez, who was just nominated for a Latin Grammy, performed his original song, “El Ciego Sin Bastón,” which translates to “Blind Man Without a Cane Stick.” He sang with a smoky vibrato to lyrics about speaking with a blind man, appreciating ignored artists and couples who die for love and ignoring politicians. As Fernandez again took over in the next song with lyrics from cante jondo by Federico Garcia Lorca, the jazz and Romani aesthetics became so indistinguishable from one another in a hypnotizing flow of sounds that neither the musicians nor the audience wanted to end.

After the show, Reyes spoke about how flamenco is as much of a feeling as it is a dance. “I think flamenco is something that comes from deep within. … It’s a complaint of a suffering, and one doesn’t even know where it comes from. … As Lorca said about duende, you don’t quite know what it is.” Escobar spoke of his dedication to his art along with the difficulty of sustaining oneself as a musician. “Life isn’t a bed of roses … [but flamenco] has given me feelings of great happiness. … It’s a way of life.”