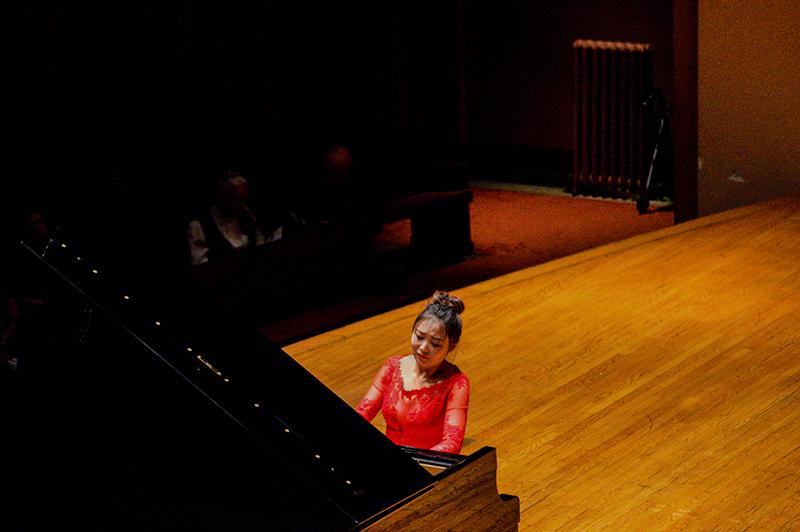 This year marks the beginning of a new partnership between Oberlin Conservatory and the International Piano Academy Lake Como. William Naboré co-founded the program in 2002 to provide intensive training to some of the best young pianists from around the world. The new partner-ship establishes an exclusive U.S. hub for the Italy-based program and will allow two students, chosen from international applicants, to participate in a two-year artist diploma program. This past Sunday, three pianists from the academy presented a concert in Finney Chapel showcasing the high-caliber musicianship that Lake Como is producing. In addition to being the inaugural concert of the Oberlin-Como partnership, the performance also marked the start of the 138th season of the Artist Recital Series. Each of the three performers played differently from the others, but were similar in that they all had their own distinct voice. The variety of sounds and interpretations coupled with excellent choices in repertoire led to a successful and memorable concert.

The first to play was Chinese pianist Ran Jia, who performed Schubert’s brooding Sonata in C Minor. The first movement immediately put Jia’s remarkably clean and articulate technique to the test, and she passed with flying colors. Jia did not subscribe to the loose sense of rubato that solo performers often have, instead playing with an almost metronomic sense of time. Each blazing scale passage was even and precise. The second movement, in stark contrast to the tumultuousness of the first, featured a slow, optimistic chorale, which returned multiple times and was interspersed with short, faster sections. Jia played with a pure and uninhibited sound. Each time the original theme returned, she performed it with a slightly different color, emphasizing its importance within the structure of the piece. The third movement, a straightforward minuet and trio, passed fairly quickly and did not offer much musically, though Jia’s playing was excellent. The fourth movement returned to the drama and angst of the first; the melody bounced up and down the keyboard, and Jia maintained the tension until the final, emphatic chords.

After the precision and musical exactitude of Jia, Italian Alessandro Deljavan performed. His portion of the program was filled by Frédéric Chopin’s second set of 12 études. Each of the short pieces showcased a different skill set of Deljavan. He navigated the changing characters with ease, quickly shifting from barrages of virtuosity to more somber and introspective moods. Deljavan played with a romantic interpretation, utilizing a convincing sense of rubato and a legato touch. He could often be heard singing along with the music, Glenn Gouldian style, which helped him to shape phrases with a sense of natural breath. The seventh of the twelve etudes was especially touching. Titled “Cello,” it was the first respite after six dazzlingly virtuosic movements. The slow opening theme balanced well between the bass and the higher melody, and the music slowly morphed into something immensely heartfelt. Although Deljavan’s technique through all of the difficult études was impressive, the slow music showcased his playing best. His legato phrasing and sense of timing drew out the intensity and romanticism of the music. Deljavan finished with the bombastic 12th étude “Ocean,” which evoked imagery of an unforgiving and destructive sea, until the end of the piece which evoked imagery of the sun coming out —a glimmer of hope on the stormy horizon.

After the 12 Chopin études came 12 of Alexander Scriabin’s 24 preludes, performed by the third and final pianist, Cuban Marcos Madrigal. It seemed that the best might have been saved for last, as every moment of Madrigal’s performance was expertly executed. Much like the Chopin that had preceded it, each of the Scriabin preludes had its own character. Madrigal played with an enormous sound that filled Finney Chapel, but in quieter passages he also played with a tender and sensitive touch. He seemed to find a good compromise between Jia’s metronomic rhythm and Deljavan’s sense of freedom within the long lines. The slow and reflective 15th prelude showed off Madrigal’s more delicate touch, while the faster 23rd gave him a chance to demonstrate a more youthful side to his playing. After the 12 preludes, Madrigal finished the concert with a remarkable performance of Sergei Prokofiev’s relentless Sonata No. 7. Through all three movements, Madrigal was never weighed down by the intensity and virtuosity of the music. He never released the tension, even in the most intimate movements. The third movement was a hailstorm of musical genius, which Madrigal played with impeccable technique and an undeterred sense of lyricism.

Thanks to three spectacular and varied performances, the inaugural concert of the Oberlin-Como program was an immense success. The pianists demonstrated not only impressive command of the keyboard but also a sense of individuality. In the world of classical music where achieving an elusive perfection is a driving force, these three pianists showed that what is most important is to have a distinct artistic voice and to commit to it wholeheartedly.