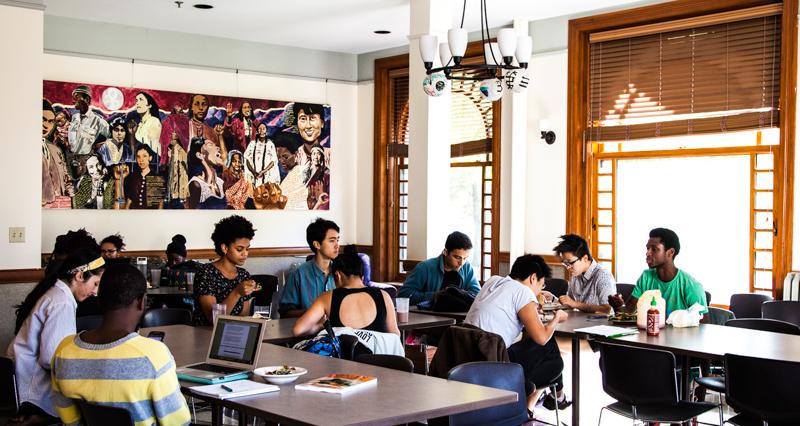 Students at Third World Co-op eat lunch on Thursday. The co-op has served as a safe space for marginalized students for more than 20 years.

The Oberlin Alumni Association of African Ancestry commemorated the 180th anniversary of Oberlin’s decision to adopt a non-discriminatory admissions policy for African American students and other people of color at its reunion last weekend. Perhaps overlooked, however, is one of the most vibrant spaces for students of color on campus: Third World Co-op.

Although not the largest cooperative in Oberlin, TWC has developed a powerful presence with its small dining hall and kitchen, tucked away in the back of Baldwin Cottage. With a mural full of some of the world’s most influential people of color and figures of social justice, TWC has stood for over 20 years in resistance to racism, classism, sexism and marginalization.

Founded in 1994, TWC has served as both a safe space and an organizing avenue for marginalized students. Doctor Genji Terasaki, OC ’95, was one of the founders of TWC.

“Two years before the TWC started in Baldwin, there was a Winter Term People of Color Co-op,” Terasaki said. “It was just for Winter Term. This was the first time I was part of something like that.”

Before coming to Oberlin in 1991, Terasaki recalled there being two other cooperatives on campus for people of color, neither of which were technically official. He noted that the need partially stemmed from an awareness of the Los Angeles riots, racial divisions and the Crown Heights riot.

As a result of the political turmoil, students dining in the POC Co-op proposed permanently merging with OSCA. Terasaki explained how, while trying to establish the co-op, he and the other students advocating for the space had two main purposes: a safe space for people of color and a mission for coalescing marginalized students.

According to the OSCA website, the co-op’s new name came from The Third World Liberation Front, a student movement at San Francisco State University in the late 1960s that demanded the creation of a school for ethnic studies and a larger percentage of students of color be admitted.

However, the name change from People of Color Co-op to Third World Co-op created tension among the group of students, according to Terasaki. Some students found the name Third World Co-op to be more inclusive to a greater number of identities of people on campus. At the same time, many students still wanted the space to remain only for students of color. Terasaki explained the complexity of the dilemma.

“If a person identifies as a person of color who is Jewish, [who were] we to say that they [weren’t]?” Terasaki said. “If somebody is white … with European ancestry but were born in Brazil, speaking Spanish, should they not be in the co-op? At some point, it just wasn’t in our interest to make it exclusive to people of color.”

After the first few years of running on a lottery system like the rest of OSCA, TWC decided to adopt an application-based system. Today, TWC still takes in new members through this process.

Since then, the co-op has developed into a space that helps its members grow and understand a variety of issues — from structural racism to classism, sexism and others — through discussion. In the TWC journal archives, Kirti Baranwal, OC ’98, wrote about the importance of the co-op in her personal development.

“It was people in this space, TWC, that kicked my butt and seriously started challenging my views,” wrote Baranwal. “And I fought back and started thinking about why the conflict was going on. … It didn’t lead to immediate revelation or anything, but involved a lot of tears, reflection, hurt and a process which began then.”

While challenging its members on issues of oppression throughout its 21 years of existence, TWC has also served as a place of solace for many students of color.

“I think TWC has been a safe space for me and that there are so many micro-aggressions that I have faced from small things, like being the only person of color in a class,” College senior and TWC member Anders Villalta said. “When I come to co-op meals, I feel like I can retreat into a space where I won’t feel microaggressions based on my ethnicity, my race or background.”

As the OA4 commemorates the 180th anniversary of the admission of people of color this weekend, members of TWC spoke about how much further Oberlin still has to grow to be more aware and to fight structural racism and discrimination.

“I think that, apart from TWC, there are so many ways in which the College needs to grow to better serve its communities of color, in particular the Black community and the Latinx community,” College senior and TWC member Lisa MacDonald said. “I think that the continued need for TWC within OSCA is also a symbol of the fact that the dominant narrative at Oberlin is not one that is accommodating or comfortable to certain students of color.”

Looking into the future, MacDonald proposed that it would be better for TWC to become more open to the Oberlin city community in order to further the original intentions of the space.

“I think it would be good for TWC and OSCA [to integrate] the [city] community into our meals, like inviting the kids you tutor to cook a shift,” MacDonald said.

She said that the cooperative movement, especially in TWC, is one that advocates sharing resources with people in non-discriminatory ways.