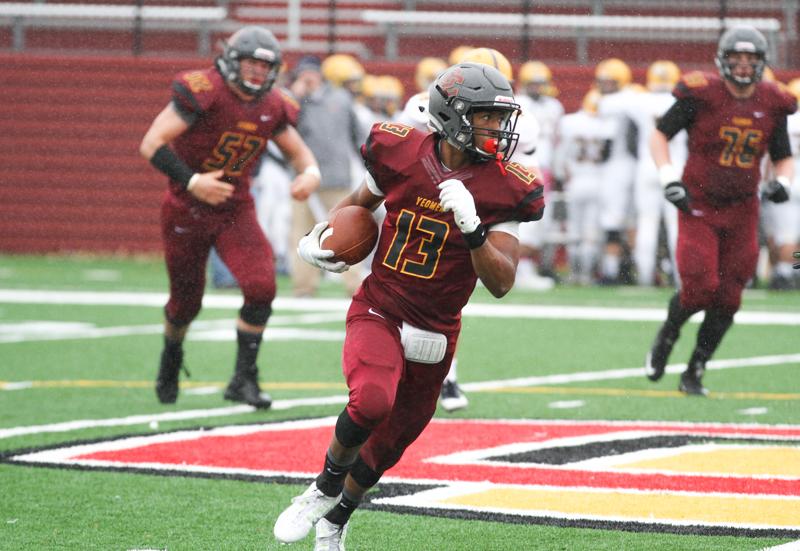 First-year wide receiver Jabari Clemons charges through the rain in the Yeomen’s homecoming game against the Allegheny College Gators this past Saturday. The Yeomen beat the Gators 48–9.

A bitter, rain-soaked October atmosphere could not slow the offensive bar­rage that the Oberlin Col­lege football team brought to the Knowlton Athletics Complex this past Sat­urday when the Yeomen skinned the Allegheny Col­lege Gators 48–9.

The Yeomen signed themselves into the school record books, landing with a score of historical statis­tical highs in the game. Senior quarterback Lucas Poggiali set the school record for most passing yards in a game, throwing for 506. The Yeomen of­fense also set a school re­cord for total yardage in a game with 690 total yards.

“Breaking both records was very exciting,” Pog­giali said. “We set out to do something special at the beginning of the week, and we knew if we played to our potential, we could get that done.”

The quarterback was only one yard away from breaking the North Coast Athletic Conference re­cord for most passing yards in a game when he was taken out about mid-way through the fourth quarter. Despite this, Pog­giali remained positive about the missed oppor­tunity, insisting that it will always be nothing more than one of those “‘What if ?’ scenarios.”

“I had no idea what my passing stats were un­til we had already taken the starters out,” Poggiali said. “My coaches weren’t aware of the records ei­ther. The whole offense was just focused on that single game total offense record, and that’s all we were concerned about.”

Despite finishing short of the conference record, Poggiali received a num­ber of accolades for his performance, including NCAC Offensive Player of the Week. He was also named on the roster of the D3football.com Team of the Week.

Head Coach Jay Ander­son asserted that while the Yeomen’s record-breaking win was impressive, it was not surprising in the least. “If you play the game the right way, you can do some great things,” Ander­son said. “I didn’t know that Lucas was one yard shy of the record, but if I had, then I would have al­lowed him to continue to let it rip.”

The Yeomen dominat­ed from the start of the game and never looked back. Senior running-back Blake Buckhannon, sophomore wide receiver Corey Fussinger and first-year wide receiver Robby Reinheimer all scored touchdowns in the first quarter. By the end of the first 15 minutes of play, Oberlin had jumped to a commanding 24–2.

In the second quarter, Buckhannon added an­other touchdown to his season total on a one-yard run, and first-year wide receiver Jabari Clemons caught a 13-yard pass from Poggiali to bring the Yeomen to 36–2.

After Poggali connect­ed with senior tight-end Thomas Firl for Oberlin’s sixth touchdown, Alleghe­ny responded with its first and only score of the after­noon, a 67-yard run that brought them to 42–9. But this would be the last taste of the endzone for the Ga­tors, as the Yeomen sealed the win with junior quar­terback Chris Herman’s pass to sophomore wide receiver Jackson Moore. The touchdown was the first collegiate score for both Herman and Moore.

The Yeomen’s offensive explosion purged from their mouths the bitter taste of last year’s home­coming, the inaugural game on Bailey Field in which Oberlin fell to The College of Wooster by a fi­nal score of 63–10.

“I think this game was really good for the team as a whole,” said junior wide receiver Justin Cruz. “Not only was it good for the team in terms of momen­tum, but it was also good for all the people who came out for the game. It felt great for everyone to finally get a homecoming win after so long.”

The Yeomen hope to capitalize on the momen­tum from their historic win when they face na­tionally ranked Wabash College at home on Satur­day at 1 p.m.