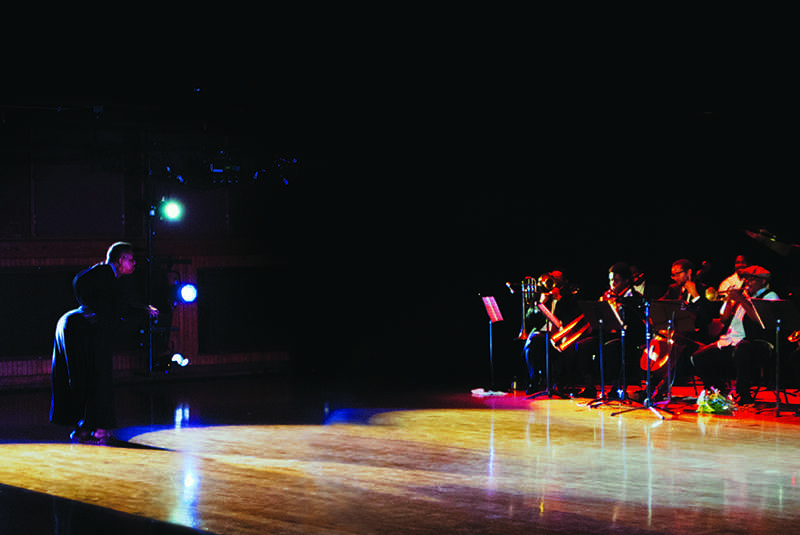 During Alumni Reunion Weekend, Dance Diaspora performers and jazz musicians showed off their creative skills with their performance of Horace Silver: Song For My Father & Other Matters Pertaining to the Heart. Alumni Kevin Louis, OC ’99, on trumpet, Shea Pierre, OC ’14, on piano, Josh Moton, OC ’13, on cello and Malachi Thomas, OC ’14, on tenor sax returned to Oberlin to play Horace Silver’s music alongside current students of Oberlin’s Jazz department. Horace Silver, a renowned jazz pianist and composer whose upbeat compositions accompanied the dancers, is famous for emphasizing a return to the fundamentals of jazz. His simple and accessible style was later labeled “hard bop.” He drew inspiration from his musician father, who hails from Cape Verde, and also quoted from jazz greats in his own compositions as a form of tribute.

Appropriately, Dance Diaspora also paid tribute to Black history as well as victims and survivors of recent police brutality. Choreographer and Artistic Director of Dance Diaspora Adenike Sharpley said the intent of the show was to push against systems of oppression through creativity. “I was taught that an artist pushes the agenda of the everyday people who don’t have time to see or change their circumstance,” she said.

Furthermore, she said she wanted audience members to understand that “Black people have a very pungent history in America.” Silver’s music was chosen not only to give context to Black culture but also, naturally, to guide the dance. “The music is the feel of what we’re doing. It sets the tone, the pace — everything,” Sharpley said.

The performance was centered on the Black Lives Matter movement, and for College junior, Stage Manager and Dance Diaspora performer Cassandra Brown, celebrating one’s humanity was central to the pieces. “We do have fathers,” she said. “We are human. … Black Lives Matter is about showing the craziness of not treating people like people. … We have culture and lives.” The now familiar faces of Michael Brown and Sandra Bland, both victims of recent police brutality, were pictured on a screen behind the dancers, bringing the audience’s attention to how the music and dance were connected to the reality of race relations in the U.S. “It’s that juxtaposition of a full life,” Brown said. “This is what a full life is. We may be shucking and driving and dancing around and doing what you expect Black performers to do, but look what’s behind it, literally behind us.” The slides were graphic at times, but as Sharpley pointed out, “For this in historical context, I don’t think you needed a disclaimer. It [illustrates the similarity between] all the church bombings of the ’50s and the recent church bombing.” Even though these images are disturbing and emotionally charged, the juxtaposition of jazz and vernacular dance — creative forms that have historically facilitated survival and empowerment within Black communities — aided in facing the painful images and acknowledging systems of oppression.

However, Sharpley lamented that to get students to attend performances dealing with heavy yet important histories such as those highlighted in Horace Silver, Dance Diaspora had to work hard to promote the shows. “Our attendance for the more historical shows is always lower,” she said. “The West African Dance Diaspora performances, you can’t get in.” She remembers a student who approached her and said they’d rather not see a show about Black people’s problems; they just wanted to see students dance.

Sharpley said, “Often, people feel as though Black people should entertain them.” When Zadie Smith visited on Sept. 29, she highlighted the history of the U.S. viewing Black performances as spectacles for white consumption in her Convocation speech. She compared an image of Katy Perry accompanying Snoop Dogg’s rap to an older photograph of Shirley Temple and her tap-dancing companion, Bill “Bojangles” Robinson, reminding us that Black artists are still seen as props for white musicians. Sharpley described how audience expectations often undermine her artistic expression. “Once you see me, you already have a feeling about me,” she said. “No matter how beautiful my music is or how beautifully I dance or sing or play, how intricately or ingenious it is … when you look at me, there’s your problem.” The view of Black lives within this performance was meant to expose audience members to these problems that tend to be ignored and celebrate Black history and culture through creativity.