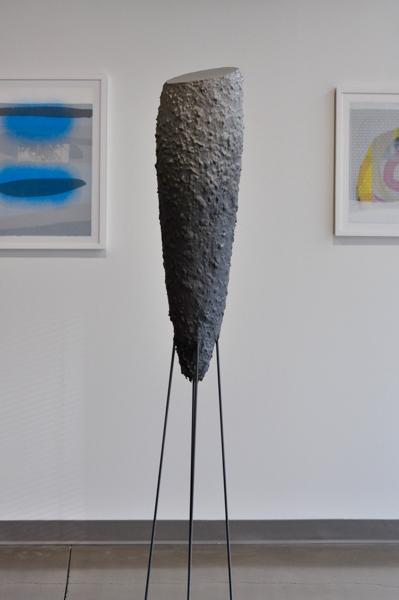 Professor of Studio Art, Reproducible Media Kristina Paabus’ textured sculpture stands among her prints in the Richard D. Baron ’64 Art Gallery. The pieces, which will be on display through Dec. 4, appear in the exhibit Fear Chaser, along with multimedia works by Visiting Professor of Integrated Media Jacob Ciocci.

The Richard D. Baron ’64 Art Gallery, located in the Ward Alumni Center, is bursting at the seams with Oberlin Professors Kristina Paabus’ and Jacob Ciocci’s vastly different yet equally compelling bodies of work. In their current exhibit, Fear Chaser, which opened Oct. 9 and will remain on display until Dec. 4, exhibit-goers are immediately thrust into Paabus’ wide array of screen prints and sculptures. Within each work, Paabus seeks to create “hybrid spatial conversations [that] explore [the] factual and fictional constructions that we employ to interact with the world around us,” according to her artist description within the gallery. In addition to teaching reproducible media at Oberlin, Paabus is a recipient of a Fulbright Fellowship for Installation Art in Estonia, the Grant Wood Fellowship in Printmaking at the University of Iowa, an Illinois Arts Council Grant and Oberlin College Faculty Research Grants. Paabus has also served as an artist-in-residence at nine different institutions across the world and taught at the School of the Art Institute of Chicago, where she received her MFA, Ox-Bow School of Art and the University of Iowa. She received her BFA from the Rhode Island School of Design.

In pieces like “Plan to Forget,” Paabus capitalizes on the screen printing process, using it to achieve a sense of depth and atmosphere. In the print, a linear pattern arranged in an architectural formation rises from behind a white transparent block, which is populated by several organic-looking, icy blue, gray and white forms. Serving as both the top layer of the print and the dominating aspect of the composition, this block recalls at once a body of water and an X-ray view of the earth’s surface. Multiple other overlapping layers of blue, gray and white at varying levels of transparency combine to create a soft, atmospheric effect, further blurring the lines between the abstracted architectural and geographic forms. Paabus’ use of overlay also clarifies her intent of transforming the two-dimensional print into an environment of its own, which proves highly successful in this work in particular. With each screen-printed layer comes more depth, drawing the viewer further and further into the artist’s created universe. What results is a compositional marriage of the natural and manmade landscape that questions the way in which we perceive our surroundings. The setting within Plan to Forget is abstract enough to remove the viewer from their surrounding environment, yet reminiscent enough of the outside world to provide the perfect starting point for close evaluation of the relationship between the individual, their environment and the individual’s understanding of their environment.

Paabus’ collection of nine prints is broken up by two three-dimensional sculptures, “Say it is So” and “Hold On”. Standing starkly at almost human height on four thin, wiry stilts, “Say it is So” takes on a life of its own despite its rocky, earthy exterior. Particularly in contrast to the framed, two-dimensional works that surround it, this sculpture of foam, metal, plastic and paint commands attention as an animated stone creature, looking almost as if it rose from the earth. This aspect of the piece invites viewers to contemplate the work almost as if it were a life form of its own, just as prints like “Plan to Forget” are perceived and understood as inhabitable environments as opposed to purely aesthetic designs. Paabus’ second sculpture, “Hold On,” is more interesting in terms of its multimedia exploration. Made from wood, paint, screen print, metal and synthetic fur, this piece marries three-dimensional sculpture with two-dimensional printing. By placing a screen print in the round, Paabus has embarked on a unique multimedia exploration, highlighting the exciting possibilities that arise when one stretches the limitations of a given medium by combining it with another. Though not as animated as its dimensional counterpart, “Hold On” is more successful at cultivating the illusion of movement, leaning at an angle, which is in keeping with its title. The name “Hold On” enhances the sculpture’s sense of downward motion in combination with its slanted form.

Paabus’ titles are highly relevant to her creative process. They play central roles within each work, which is more than most artistic champions of the notorious “Untitled” would allow. Titles like “Plan to Forget,” “Of Absolutes” and “Probability 1,” for example, are brimming with meaning and intent that cry out for viewer interaction and interpretation. As patterned, architectural forms fade into a haze of frosty geographic abstraction within “Plan to Forget,” viewers can relate this oxymoronic title to the print’s visual aspects in terms of the relationship between planned architectural design and the world of vaguely recognizable abstraction that emerges only from a mind forgetful enough of the limiting reality of its surroundings. In her courses at Oberlin, Paabus encourages students to approach the titles of their pieces with more emphasis and intent.

The work that Visiting Professor of Integrated Media Jacob Ciocci has on display within Baron Gallery is vastly different from Paabus’, as his pieces combine bright, attention-grabbing color with clusters of collaged and painted images and patterns. Ciocci’s half of the exhibit consists of two 48”x 48” canvases of mixed media collage and acrylic paint, along with a half-hour video installation titled The Urgency. Ciocci’s work breaks down internet culture and the symbols that consumers associate with it, like hashtags. By taking these symbols out of their digital context and presenting them in new ways through art, Ciocci evokes emotional and intellectual responses in viewers with his references to preexisting online imagery. In addition to teaching within Oberlin’s Art department, the Brooklyn-based artist is a current member the performance group Extreme Animals and a previous member of the Pittsburgh, PA and Providence, RI art collective Paper Rad. His work has also received critical acclaim from the New York Times, ArtReview, Artforum, Art in American and Vice.

Ciocci’s motif of illustrative hands, which can be found in both of his multi-

media pieces, is a particularly evocative aspect of his work that also successfully ties the two pieces together. Despite the two pieces’ chaotic compositions, Ciocci’s hands, which grasp and hold different objects in each work, ground the collaged images, establishing them as more than objects floating in space. In his first multimedia piece, You are not alone, forever, Who is DisneyCollectorBR? ???, this is very much the case. This piece, which is dominated by slimy lime greens, features guest appearances from DreamWorks Pictures’ Shrek along with a myriad of ribbons, text and scissors that threaten to destroy the very imagery that makes up the multimedia collage. The two pictures of human hands and three animated hands within the piece add a sense of cyclical direction to it, as the viewer’s eye travels from the magician’s hands at the bottom left of the canvas to each successive hand and the objects and internet symbols within them. Even the piece’s title, with its repetitive and thoughtfully spaced punctuation, is a reference to modern day internet culture, as similar textual style can be found on any current social media platform.

Ciocci’s second multimedia work, Why Does Everything Always Happen to Me?, is a chaotic entanglement of gradated pinks, purples and greens, fragmented facial features, spiders hanging from webs, tears and geometric forms. On closer inspection, however, this work appears as though it could be a self-portrait, as a paintbrush gripped by an extended, pink arm falls at its center. The dispersed facial features throughout the piece invite the viewer to go digging for figures and faces within it, establishing a highly evocative and interactive relationship between the canvas and its audience.

Fear Chaser is an impeccable display of artwork from Oberlin’s very own Art department that would make any student eager to learn from its two featured artists and professors. From visceral deconstructions of internet culture to emotive, created environments and creatures of abstract form, Fear Chaser is not an exhibit you’ll want to miss.