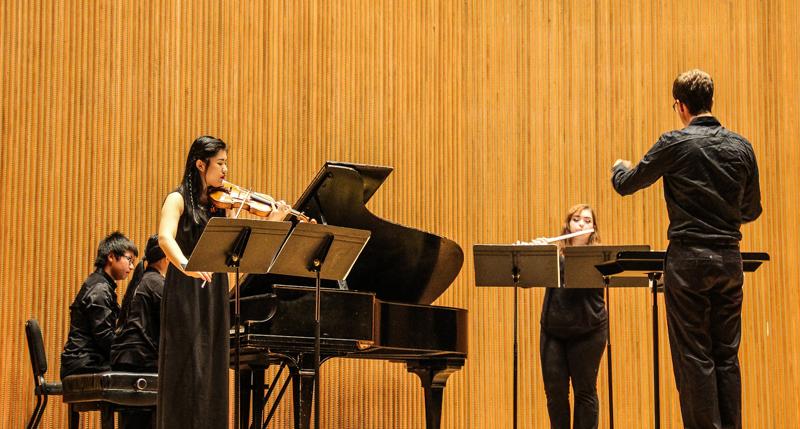 A small group of interested students filed into Warner Concert Hall and gathered up front in anticipation for the Student Composers Concert this past Wednesday. During the concert, Conservatory students showcased original works that ranged from vivid theatrical accompaniments to postmodern, entirely electronic noise sequences. Each musician displayed great conviction in their performance. It was a concert that signified the approaching conclusion of the formative stages in these musicians’ careers — practice for their future creative escapades.

After a short introduction, the first six performers — three string players as well as College junior Gabriel Simon on electronics and synth bass, Conservatory junior Carina Wu on piano and College sophomore Athena Matsil on vocals — took the stage. The piece, “Specter,” a soulful and melodic pop number by double-degree junior Griffin Jennings, highlighted the clean tenor of all the string instruments and Matsil’s animated voice. The piece was tender and delightful; the combination of expressive lyrics and beautifully meshing instruments felt romantic and nostalgic. It was an uplifting introduction to the night.

From that point forward, the program focused more on distilled expression than aesthetically pleasing sounds. The second piece, Conservatory first-year Hao Zou’s “Unspeakable Landscape,” was an impressive theatrical number featuring College sophomore Kelsey Burnham on flute, Conservatory first-year Xin Yuan Wang on violin and Conservatory first-year Jay Hwan Kim on piano. It was composed of contrasting harsh and delicate sequences and played upon each person’s imagination, bringing to mind both haunting and idyllic landscapes. During harsher parts, the performers occasionally manipulated their instruments in creative ways. Kim violently plucked the strings of the piano while Wang blew into the violin’s f-holes, and Burnham buffeted her flute with even more powerful breaths.

The next three pieces, composed entirely for electronics, were irregular and industrial. The ways each piece manipulated certain instruments were engaging. The three compositions — double-degree sophomore Joseph Misterovich’s “Sounds Made with Analog Synthesizers,” double-degree sophomore Nathaniel Baker Salisbury’s “NIEQ Expansion” and Conservatory junior Judy Jackson’s “beta II” — distinguished themselves by their varying intensity and types of sound. Ultimately, each composer exemplified the goal of the concert: to push themselves to create something truly new.

The rest of the concert consisted of music written in a more traditionally classical style. Although these pieces utilized familiar instruments and formats, they still demonstrated an unrestrained sense of expression. Conservatory sophomore Gabriel Hawes’ “Ocean,” featuring the composer and Conservatory senior John Burnett on violin, Conservatory sophomore Milo Talwani on viola and Conservatory first-year Nia Burger on cello, consisted mostly of jagged short strikes on the instruments which rhythmically alternated between members of the ensemble. Conservatory first-year Aliya Ultan then performed her own composition for cello, titled “this one held the other.” She would passionately, and sometimes violently, pluck and slash at her cello, producing what seemed to be a deeply personal piece. The concert concluded with Talwani’s own piece, “Ideally, everything would float,” performed by double-degree sophomore Jerry Xiong and Conservatory sophomore Javier Otalora on violin, double-degree junior Nic Vigilante on viola and Conservatory sophomore Zachariah Ettlinger Reff on cello. The introduction was composed of staccato sequences, and after a brief intermission, the ensemble resumed with airy cadences.

By the time the final group had finished, the audience had witnessed an impressive and varied show that doubled as a successful display of each composer’s craft.