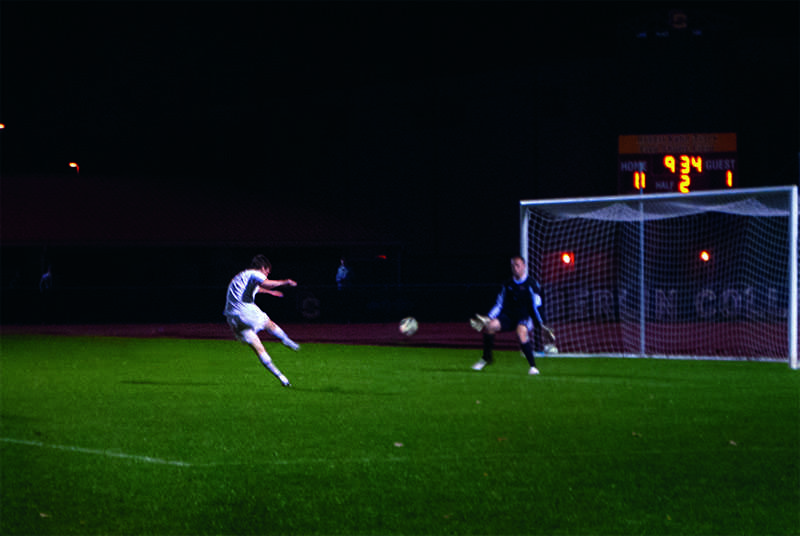 Senior forward John Ingham fires a shot on goal against the visiting Ohio Wesleyan University Battling Bishops this past Saturday. The Yeomen were ultimately defeated by the Bishops 1–0 but went on to defeat the Hiram College Terriers 4–0 on Wednesday. The Yeomen are currently 10–6–1 overall and 4–4 in conference play.

The men’s soccer team defeated the Hiram College Terriers in a 4–0 shutout this past Wednesday in their final home stand of the season.

Senior forward John Ingham wasted no time in getting the Yeomen on the scoreboard, rocketing a shot into the corner of the net in the 10th minute of play for his 14th goal of the season. Junior midfielder Adam Chazin-Gray followed suit in the 17th minute, sending the ball over the keeper and earning his first goal of the season.

Junior midfielder Nick Wertman didn’t let the first half pass without getting in a goal of his own, collecting his fourth goal of the year shortly before the halftime whistle to give the Yeomen a commanding 3–0 lead.

In the second half, Oberlin continued to dominate possession and dictate the pace of play. The Yeomen settled into a comfortable lead, playing a possession game and weaving the ball between the Terriers easily, giving themselves plenty of offensive chances. The team would finish the game with a 21–7 margin in shots and 9–1 advantage in shots on goal.

Chazin-Gray said the Yeomen’s fluid ball movement set a good pace for the rest of the game.

“The game was fast-paced overall,” he said. “We dominated the first half, moving the ball really well through the midfield, and John Ingham and Slade Gottlieb did a great job working together up front, playing creatively and making nice runs and moves up the field.”

Head Coach Blake New said the Yeomen’s control of the match’s pace was integral to their success on the field. “We took control from the very start,” New said. “Playing to our strength of keeping and moving the ball as well as converting chances was definitely key in the win.”

The Yeomen’s final score of the game came in the 56th minute, when sophomore midfielder Jonah Blume-Kemkes managed to set up sophomore forward Timothy Williams for his fifth goal of the season. First-year keeper Koryn Kraemer saw little action in the Yeomen’s final home game, finishing the game without a save in the shutout.

Prior to their Hiram game, the Yeomen faced the Battling Bishops of Ohio Wesleyan University on Saturday but were ultimately defeated 1–0 to spoil a rainy senior night.

Despite the abysmal conditions, Kraemer maintained that the weather was not a major factor in the Yeomen’s loss.

“The rain increased pace but did not negatively impact the game,” he said. “It simply forced defensive players and goalkeepers to be more conservative with decisions in the slippery conditions and encouraged shots on the ground from strikers. The rain created a cool atmosphere in which to play.”

The first half was a back and forth battle, but neither team was able to score. In the second half, the pace picked up as both teams noticeably increased their intensity. In the 67th minute, the deadlock was broken by Ohio Wesleyan’s Phoenix Neitzelt, who headed the ball off of a well-placed set piece play past Kraemer and into the back of the net.

While the result was certainly not ideal for the Yeomen’s senior night or for post-season aspirations, Ingham didn’t let it dampen his appreciation for the recognition, nor his nostalgia for his college career.

“Senior night was great,” Ingham said. “To be appreciated for what we have done is nice, but this team has done so much for me that it is sad [that] it is almost over. I have really enjoyed playing here, and for it to be almost over is very tough to get over.”

Despite the loss to Ohio Wesleyan, the Hiram win moves the Yeomen to 4–4 in the NCAC and 10–6–1 overall; this is the second time in three years that the Yeomen have reached 10 wins in regular season play. More significantly, the win ties Oberlin with Denison with 12 total league points and keeps them in contention for the final playoff spot.

Oberlin plays at Denison at 1 p.m. on Saturday, Oct. 31. With an NCAC playoff bid on the line, it should be an exciting match.