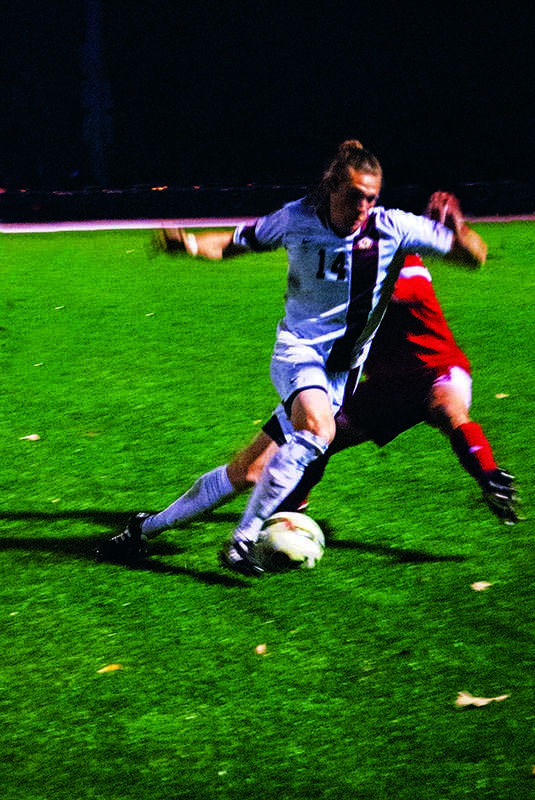 Junior forward Sam Weiss dribbles past a Little Giant of Wabash College on Saturday, Oct. 20. The Yeomen concluded their regular season with a record of 11–7–1.

A powerful early shot from the Kenyon College Lords to the lower left corner of Ober­lin’s goal spelled defeat for the men’s soccer team at the North Coast Athletic Confer­ence semifinals on Wednes­day. Oberlin was unable to equalize after Kenyon’s junior forward Tony Amolo found the back of the net just 14 min­utes into the first half, ending their conference campaign with a score of 1–0.

The loss to the Lords was all too familiar for the Yeomen, as they were also defeated by Kenyon College 1–0 in the first round of the NCAC tour­nament in 2013. This year, the defeat brings the Yeomen’s regular season to a close with a record of 11–7–1.

Oberlin saw two other chances to balance Wednes­day’s score in the first half with shots from senior forward John Ingham and first-year midfielder Trenton Bulucea, both of which Kenyon keeper Sam Clougher saved with relative ease. Ingham and Bu­lucea’s shots on goal would be the only threats to Clougher for the duration of the game.

The highly competitive and foul-heavy contest began to wear on the Yeomen in the second half, as they failed to get any late-game shots on goal. Over the course of the game, the Lords drew 13 fouls while the Yeomen pulled 11, with Ingham and Kenyon’s Woo Jeon each receiving a yel­low card.

Despite being unable to break the Lords’ narrow lead, the Yeomen’s loss is overshad­owed by the showstopping victory that brought the team to the conference tourna­ment in the first place. In a must-win game at Denison University last Saturday, junior midfielder Nick Wertman’s double-overtime goal proved to be the difference as the Yeo­men defeated the Big Red 2–1.

Oberlin and Denison each entered the game knowing the winner would advance to the conference tournament while the loser would watch their season end with the sound of the final whistle. The Yeomen were prepared for a tough game, not only because of the must-win situation, but also because they hadn’t defeated the Big Red on the road since 2005.

For the majority of the first half, the game was a deadlock. It took 35 minutes of play un­til the first goal of the game, when Bulucea scored his third goal of the year to give Oberlin a 1–0 lead.

This advantage would hold until halftime, but it didn’t take long for Denison to find its stride in the second half. The Big Red tied the score at 1–1 after Denison’s Karch Ma­jtenyi found the back of the net off a rebound shot.

The 1–1 deadlock held all the way up until double-over­time. With the Yeomen’s sea­son on the line, there was no better player on which to rely than Nick Wertman, who had been named the NCAC Player of the Week and had already scored two game-winning goals this year. In the 102nd minute, junior midfielder Adam Chazin-Gray sent a cross into the box and Wert­man headed it into the goal to send Oberlin back to the NCAC tournament.

Yeomen Head Coach Blake New praised his squad for their performance under pressure.

The Yeomen have been consistently competitive this year due in large part to the play of first-year goalkeeper Koryn Kraemer. The rookie’s .822 save percentage is best in the conference.

Coach New is very satis­fied with Kraemer’s play and development this year. “He has exceeded our expectations,” New said. “We can’t be more pleased with Koryn’s play throughout the season,” said New.

In addition to Kraemer’s effort, the offensive play this year has been crucial to Ober­lin’s success. The Yeomen have scored 40 goals, which is the third-best in the NCAC.

For the Yeomen, returning to the conference tournament was an expectation. Despite their 2013 loss to Kenyon, the Yeomen received an at-large bid to the NCAA tournament that year. On the national stage, the Yeomen defeated the State University of New York at Oneonta in the first round of the Rochester, NY, Regional 2–0, before falling to 11th-ranked University of Rochester 3–0.

Junior forwards Sam Weiss and Dan Lev were members of the 2013 team. Weiss believes the team is more prepared this year than they were the last time they appeared in the NCAC tournament.

“We are a lot older,” Weiss said. “This is not a position where we are surprised to be. We were disappointed to not be here last year.”

Although there was dis­appointment last year, there were also some low points this year in a number of close loss­es throughout the duration of the regular season. Every Yeo­men loss this season came by one goal.

Senior midfielder Louis Naiman commented on the resiliency of the team to fight back despite such setbacks.

“We know we are a good team,” Naiman said. “We know we can be successful. It really is just a matter of executing.”

With the conclusion of the regular season the Yeomen will await a potential postseason invite to the 2015 NCAA tour­nament for another chance at national competition.