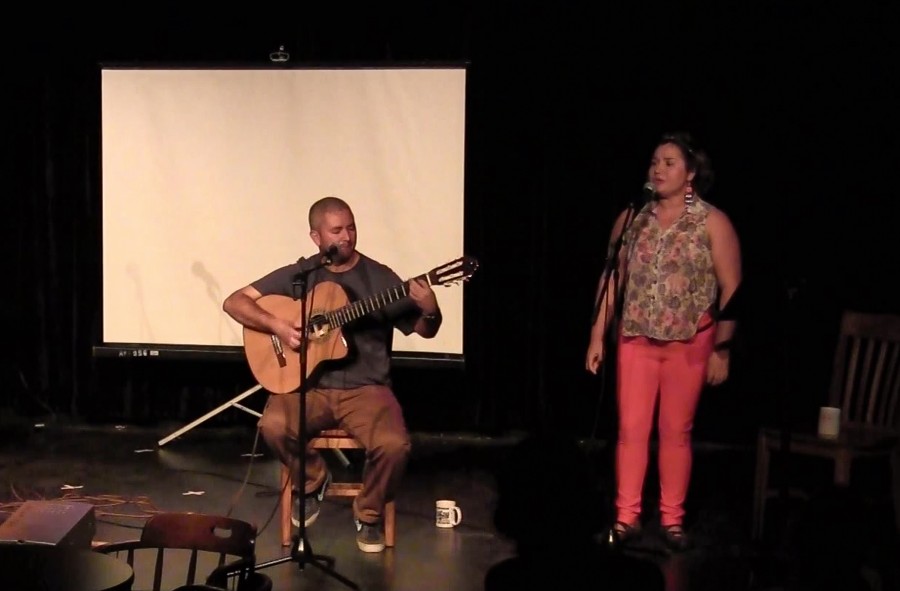 Courtesy of Oberlin in Solidarity with El Salvador

Guitarist Peter Nataren strums to Elizabeth Membreño’s melodic singing. The Salvadoran artists, whose music is influenced by the Cuban nueva trova movement, performed at the Cat in the Cream Tuesday.

When live music manages to create a connection with the audience, it is often through the merit of the music being played — how much the audience enjoys the melodies, how in sync the performers are and how much energy is passing between audience and performer. Yet there is another way in which music can touch listeners: through honesty and palpable earnestness of expression. The curious part about music of this last sort is that it can transcend traditional notions of skill and preparedness.

When Salvadoran activists Elizabeth Membreño and Victor Torres went onstage at the Cat in the Cream Tuesday night, they brought an intense musical passion and sincerity that was accentuated by the straightforward nature of their songs and lyrical themes. Performed with only an acoustic guitar — played by musical colleague Peter Nataren — and their two voices, the directness of the melodies and lyrics was both entrancing and haunting. Although a song titled “Maiz” (“Corn”) induced chuckles from the audience, Torres explained the importance of the crop to the people of El Salvador. “This song is for our parents and the farmers of El Salvador who feed our country everyday,” he said. Indeed, most of the songs Torres and Membreño performed shared a similar theme.

The guitar and vocal melodies were strongly influenced by the nueva trova movement that began in Cuba in the 1960s, a political singer-songwriter tradition that became popular throughout Latin America and Spain. The nueva trova movement and these new songs it has inspired owe a great deal to North American folk revivalists such as Pete Seeger, Joan Baez, Peter, Paul and Mary and Bob Dylan. It is clear that the unionist, socialist roots of the American folk revival have not been lost on the songwriters of El Salvador and Latin America at large. Torres even paid tribute to one of the great Cuban singer-songwriters of this generation, Pablo Milanes, by performing a rendition of his romantic and lyrical song “Yolanda.”

Simpler, pop-influenced melodies were paired with lyrics that paid tribute to the more than 75,000 people killed in the Salvadoran Civil War and to traditional Latin-American leftist calls for solidarity among women, the poor and the working-classes. Membreño and Torres mixed many of the tropes of nueva trova, such as hope, solidarity and the use of national poetry as lyrics with experiences more specific to the Salvadoran context.

Several songs specifically dealt with the subject of individual and national trauma. One song, titled “Mi Pesadilla” (“My Nightmare”), describes scenes from the Salvadoran Civil War, remembered as “just nightmares” that remain decades after the violence brought about by government and rebel death squads has ended. Witnessing these songs of resistance, it was clear that these were not so much anthems as they were personal prayers and methods of coping with brutal realities that have consumed the lives of thousands. It is hard to roll one’s eyes at a call for revenge on the oppressors when it is coming from someone who spent years in refugee camps, exiled from their homeland.

Several of the songs also included spoken word sections recalling many of the same topics, decrying violence and its humanitarian consequences. It is as powerful as it is rare to hear songs forged in conditions of true desperation, performed by those who lived through those desperate times themselves. It was an effective explication of the current struggles in which

Torres and Membreño are involved, including education, HIV prevention and advocacy, nutrition in impoverished regions of El Salvador and justice for political prisoners across Latin America and the world. Most of these efforts are centered around the village of Santa Marta, described as a “community of activists and guerilla fighters” with strong ties to the FMLN, a Marxist guerrilla resistance movement that fought the U.S.-backed right-wing government in the Salvadoran Civil War.

Membreño, Torres and Nataren embody a strong tradition throughout Latin America of resistance to oppression rising from the grassroots level, linking feminist, pro-indigenous, Marxist and religious organizations together against what are often perceived as capitalist attempts at intervening in and controlling their communities. Their music and artistic activities are envisioned as a form of “preserving historical memory” both within El Salvador and throughout Latin America. In this they greatly succeed, connecting their stories of struggle and resistance with broader narratives of social justice and equality. From the haunting stories of war and struggle, to the traditional — and truly delicious — pupusas served during the performance, Membreño, Torres and Nataren brought a powerful and important story to the Cat in the Cream — one that will certainly remain in the minds of those present for a long time to come.