Oberlin Unable to Make a Splash in Home Meet 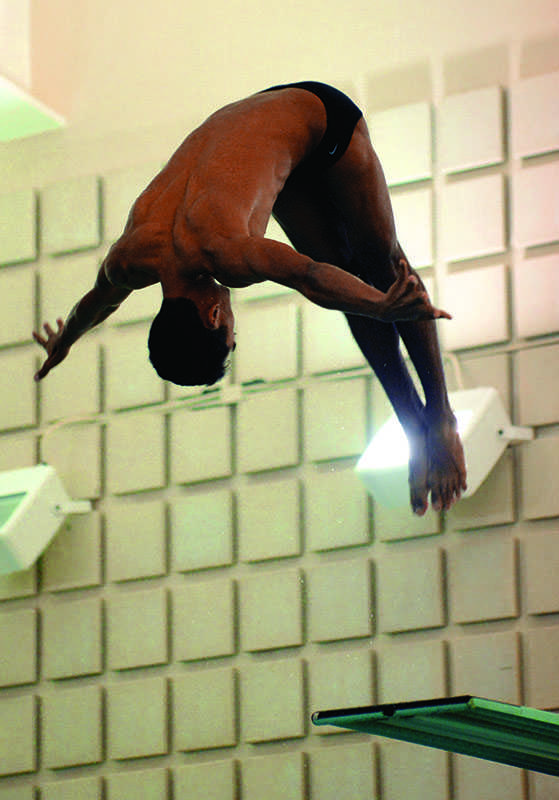 Senior diver Benjamin Miyamoto curls into his 3-meter dive at Oberlin’s Robert Carr Pool at the swimming and diving team’s home opening meet. The College of Wooster Fighting Scots defeated the Yeomen and Yeowomen 207–87 and 161–135, respectively.

The swimming and diving teams were defeated by The College of Wooster Saturday in their first home dual-meet of the season.

The Yeowomen saw early success at the home opener, with the team of seniors Lauren Wong and Deirdre Haren and juniors Maddie Prang­ley and Nora Cooper defeating the Fighting Scots in the 200-yard med­ley relay with a time of 1 minute, 55.31 seconds. Cooper and Prangley would go on to take first and second in the 200-yard free, clocking in at 2:0.45 and 2:2.80 respectively. Senior Samma Regan, sophomore Oriene Shiel and junior Kathleen Falk dom­inated in the 1,000-meter, finishing in first, second and third respective­ly. But the Yeowomen would ulti­mately be defeated 161–135 despite such superb performances.

For the Yeomen, the squad of first-years Jacques Forbes and David Bright, sophomore Adam Winikoff and junior Nils Gudbran­son were edged out in the 200-yard medley to finish second with a time of 1:40.55. Junior Jeremy Cooper would similarly be the runner-up in the men’s 1,000-yard free, clocking in at 10:35.01. Bright’s performance in the 100-yard breast represented a high point of the afternoon, setting the fourth-fastest time in program history at 1:00.43 and going on to win the 200-yard free in 2:18.95.

While acknowledging his suc­cess on Saturday, Bright noted that there are still other season goals that he wishes to accomplish.

“I was excited to see that I start­ed the season with such a good time,” Bright said. “I would like to try and break the school record in the 100 breast sometime before the end of the semester.”

In the end, the Fighting Scots would overpower the Yeomen, fin­ishing the afternoon with a final score of 207–87.

Prior to Saturday’s meet, both teams were able to get a win at Hi­ram College on Friday, the Yeowom­en finishing 182–32 and the Yeomen finishing 140–67.

A highlight of the meet was Prangley’s dominant performance in the 800-yard freestyle, finishing ahead of all other competitors by 56 seconds with a final time of 10:02.05. Additionally, the team of sopho­more Megan Letkeman along with Regan, Wong and Cooper finished 6 seconds ahead of the pack in the 200-meter medley relay with a time of 2:13.92. The Yeowomen would go on to win 12 of the 13 competitions of the night.

In his first collegiate dual-meet, Bright was victorious in the 800-meter freestyle, winning by 16 seconds and clocking in at 9:47.95.

Winikoff and Gudbranson also contributed win­ning efforts, with Winikoff finishing first in the 50-meter sprint and 100-meter with times of 24.56 and 56.36 respectively, and Gudbranson victorious in the 100-meter fly with 1:01.44. Additionally, Coo­per had first place finishes in both the 400-meter IM and 200-meter free.

Looking forward, Regan said that there is still much room for improvement in both squads.

“I think the team can definitely improve upon the little things,” Regan said. “We race while still training really hard, and we race tired, which means that you might forget to emphasize proper technique or splitting a race correctly. If we learn how to do the little things now, who knows what we can achieve by the end of the season.”

Head Coach Andrew Brabson was also adamant that competing on the national stage is a goal both the Yeomen and Yeowomen are gearing towards this season.

The Yeomen and Yeowomen will jump back in the pool this Saturday at 1 p.m. when they travel to Cleveland to compete against Case Western Re­serve University.